The bugs weren't quite as bad when we got up early today, but we still moved around quickly (as quickly as we can in the morning) packing up the bike and taking down the tent. Eating breakfast was the number one priority, but we wanted to be some place mosquito free, so we got on the bike and pedaled back out to the main road looking for a good spot to stop and eat.

About four miles down the road we parked ourselves at the corner of a little road that crossed the railroad tracks and sat down to cook some food. Jenny made beans, sausage, and cheese while Brett worked on some writing. A couple trains passed us and we waved. 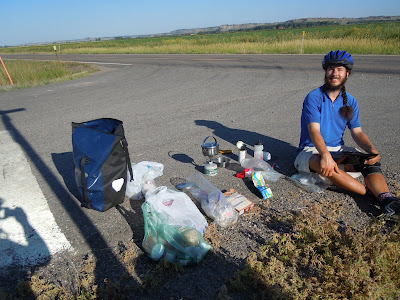 All the food out of the bag and ready to cook breakfast.
After we were fed, pedaling felt a little easier and we soon reached the town of Worden where we found a gas station that had very nice restrooms. We bought a few treats and the man who rang us up said he saw us cooking earlier. Then we were back on our way west.

Much of the biking this morning wasn't very exciting. It was hot, but not unbearable and we were glad that we'd gotten an early start on the day. The part of the morning that WAS exciting was the moment we spotted the mountains! We had wondered when we'd see them, and Brett had guessed we would see them today. Beautiful! The roads we took became busier as we neared Billings. We stopped at a Walmart outside the city and bought extra fuel for the stove to make sure we don't run out, plus some chocolate milk to tide us over until lunch which we were hungry for. 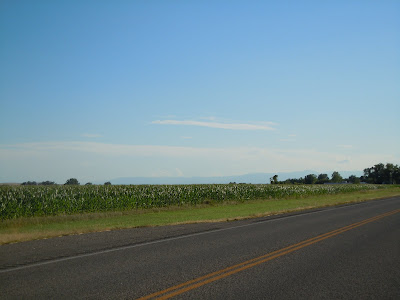 One of our first shots of the mountains in the distance. 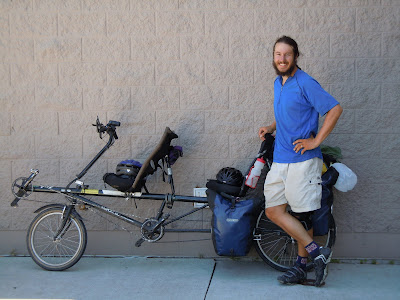 Posing with the bike.
Once we coasted down the hill into the large city of Billings it was afternoon, the temperature had risen considerably, and we were really hungry. After smaller towns where it can be hard to find a good restaurant that also had wifi, we had set our sights high for Billings. We had “Chinese buffet” on our minds, but the first few establishments we tried didn't have Internet at all. The traffic was a bit crazy, too, but eventually it calmed down as we entered the actual downtown area. We saw a sign for an independent sandwich shop called Rockets, and they had strong Internet. Done deal.

Rockets was great. Their fare was excellent, atmosphere happy and artsy, and it wasn't too noisy or distracting. We did a lot of work on the Internet, checking email, reading comments on the blog (so many nice ones), and other odds and ends. One big thing, too: we bought plane tickets home! We're flying home September 7th from San Francisco! Now we just have to get there. The timing should be about right, although Brett will have to jump right back into work the next day.

We had to leave Rockets at 4 o'clock when they closed, but we had pretty much done all we wanted to do. Next up was grocery shopping. We got directions to an Albertson's and headed there. We bought so much stuff!! Maybe most importantly we bought a large bag of ice, but also lots of stuff to cook and snack on. It took us a long time to pack and strap it all on the bike, but that was okay because we avoided a heavy rain and wind storm while at the store. 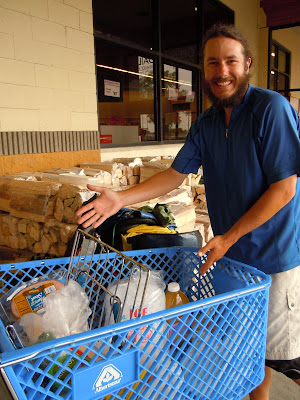 Brett shows off our groceries!
After that, all we had to do was find our way out of the city, hopefully on Frontage Road again. We had looked it up on line, and it took us a little while and a couple guesses, but we found it. We were really happy to be leaving the big city. Frontage Road paralleled the highway, and it was right next to its eastbound traffic. Brett enjoyed waving to folks on the highway for a while. 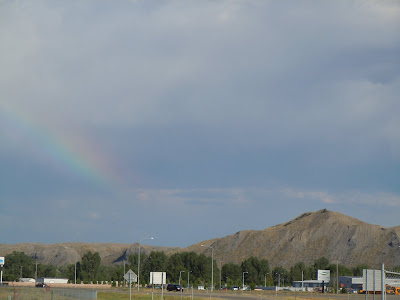 Just as we were leaving Billings, we spotted this cute rainbow.
We thought we might stay the night in Laurel, because our state map had it listed as having some sort of camping. We also knew there was an RV park a little before the town, but it hadn't gotten the best reviews. When we got to a truck stop (with the RV park behind it), we asked a cashier about camping and she had no idea. We had seen a sign for fresh pie at the diner attached, so we headed in there to ask, and maybe for some pie.

A piece of coconut cream pie later, we had found out there was camping in Laurel at a town park. We thanked them and left, but the sky looked really ominous and the wind was picking up. We decided to take a look at the RV park before leaving, and then we decided just to stay as the rain seemed ready to fall any minute. We raced to set up the tent before it poured, and we were in the tent by the time it hit! 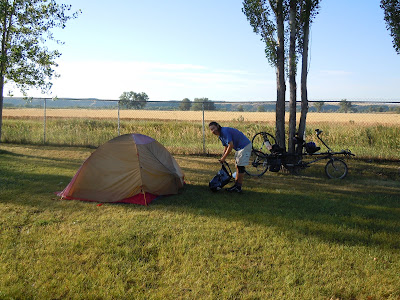 Our camping spot for the night. (This was taken the next morning, when it wasn't raining.)
We ate some food in the tent, and Jenny ventured out again later to take a shower, but it was a low-key evening, and we pretty much just went to bed.
Posted by Jenny at Saturday, July 31, 2010