Sometimes we get stuck on wanting to use the Internet and it's hard to focus on other things, like biking, for example. Leaving our campsite at 9:20, we pedaled the few blocks into the center of town. There we found a weak wireless signal outside a cafe, so we went inside hoping we'd get both great breakfast and nice Internet. 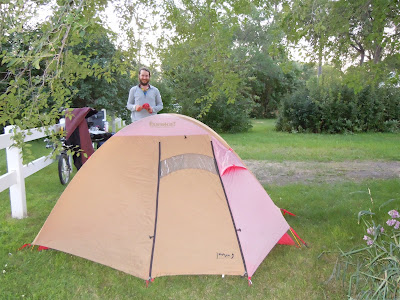 Brett pauses long enough for the photo.
No dice. The food was “enh” and not exactly cheap, and the Internet wasn't really working for us. We spent some time trying different things to get it to work, but in the end just waited until after breakfast to try somewhere else. We must have looked silly as we walked up the street with the laptop open, looking for a strong enough signal that wasn't locked. We found a super strong signal coming from a different cafe, but that cafe was inexplicably closed.

As we left town, we realized we weren't really enjoying North Dakota much. Flat and windy isn't our idea of a great time. We just weren't having very much fun. We did lighten up a little when we got to Gwinner and took some pictures. We were still hoping for some time on the Internet to post a day on the blog. We found a gas station/convenience store with a signal outside, but when we went in, bought a salad and sat down excitedly, we found the signal wasn't strong enough inside. After our chef salad (which was at least decent), we went to sit in the heat outside, on the parking lot curb, posting to the blog. 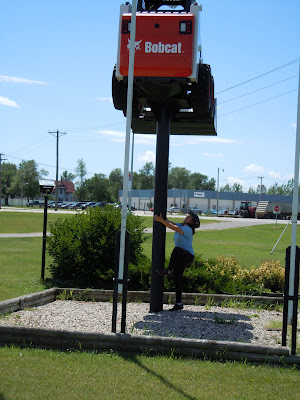 Jenny thinks about climbing the Bobcat pole in Gwinner. 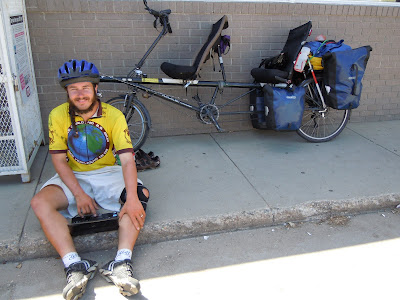 What won't we do for Internet?
After we left the sunny spot and continued on Route 13, we were both in much better moods, though still feeling hot. We were riding by lots of corn and wheat fields. It's amazing to think about all the food, for cows and humans, that comes out of all these fields we ride by and thousands more like them. 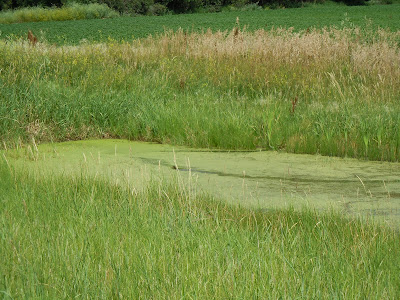 You may not be able to see it, but there's something swimming in there! You can mostly see its paths. An otter maybe?
Shortly after we turned north to stay on Route 13 as it piggybacks with Route 1, we noticed a soft repetitive thumping sound coming from the rear tire. Worried, we pulled over to the side to have a look at it. It turned out that the tread of our Armadillo rear tire was splitting apart! Confused and worried why this was happening, but feeling the tire was safe enough to ride on because of its tough inner lining, we continued on our way. 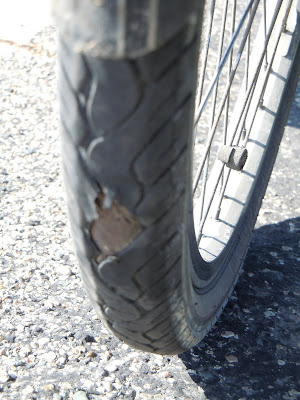 Yeesh! That doesn't look good. But that inside layer is what makes this kind of tire so great. Hopefully we'll be fine until we can make it to a bike shop.
We were distracted from our thoughts about the tire when a 4-wheeler pulled alongside us. The driver wanted to talk to us about our cool bike and our apparent trip. We pulled over and talked to Tim, a farmer himself, for a nice little break. He was so pleasant and full of questions. He even kindly offered us water from his place a little bit back. We didn't want him to have to go get it, nor did we want to turn around, even though the water sounded really good. We had water already so we said 'no thanks.' 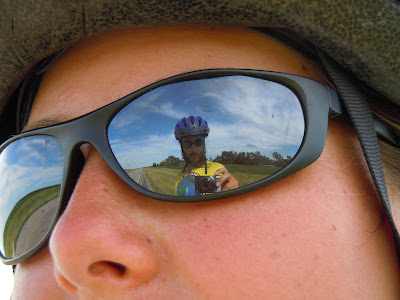 Lots of time spent wearing sunglasses.
Heading into Verona, we almost did run out of water because it was so hot and we were trying to drink enough. We made it to gas station there, and the nice lady there filled our bottles up for us. We also bought some Vitamin Water and ate some chocolate. 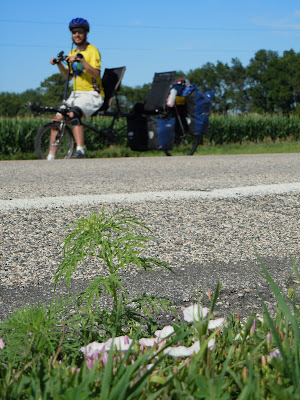 Beautiful and prolific flowers in the foreground, Brett in the background.
From Verona, which isn't much of a town from what we could see, we headed west again, with only eleven miles to go before we reached Lamoure. There were a few climbs over those eleven miles, and then a great downhill into Lamoure. We stopped at the gas station in town and asked if there was a place to camp in town. The lady there told us that just west of town was a little park to camp in for free! It's always very exciting when things work out the way we hope they will. And to boot, there was a good strong Internet signal from the gas station! After we bought some jelly to go with our peanut butter and some beans and chips to go with our rice and cheese later, we sat outside on the bench and ate sandwiches while we used the computer. 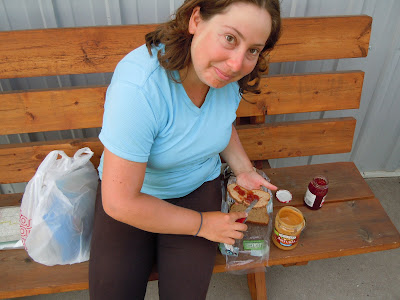 Peanut butter and Jenny...
When we were ready to go find the park to camp in, it was starting to get dusky. The spot to camp was beautiful! We were right by the river in a nice grassy area with picnic tables and pavilions. There were no bathrooms, but we were just glad to have a good spot that felt safe for the night. Picking a place under cover of the pavilion, Brett set up the tent while Jenny started cooking dinner. 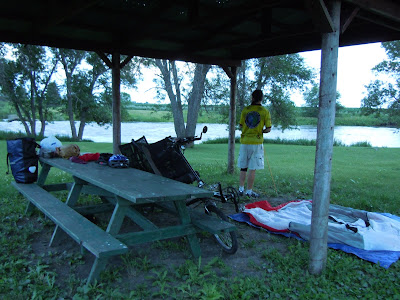 Our spot partly undercover, with the pretty river in the background.
As we were finishing dinner (in the tent because of the mosquitoes) it started to rain. We're starting to think that a day without rain is a really rare thing this summer! We brushed our teeth out in the soft rain, preparing for bed. It was pretty dark, but there was just enough light to see that something had just landed in the river we were camped next to. It was a bird, but this wasn't an average-sized bird, it was big! A few minutes later, another one landed.

We couldn't get a picture because of the rain and the darkness, as much as Brett tried. Still, it was exciting to see a bird that was so big and strange looking. We think it was white, but we couldn't be sure. Maybe it was a swan? 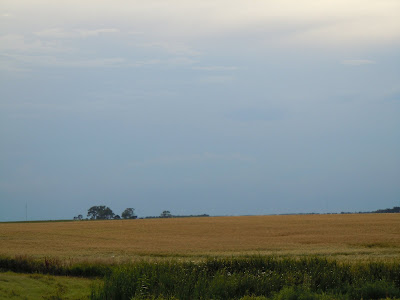