Even though we got in late the night before, Brett set his alarm for 6:43 A.M., but we didn't get up right away. Still, we did manage to leave by 9:30--not bad for us. Excited by the prospect of getting into the U.P. by evening, we set off looking for a place to eat breakfast. 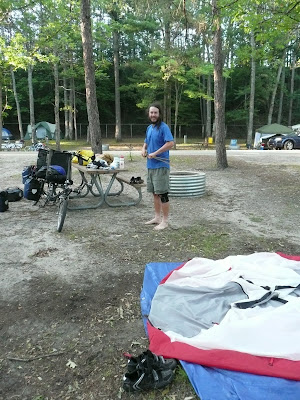 Packing up in the morning.

We found both good breakfast and a good Internet connection at Wilson's, just a half mile down the road from Burt Lake State Park. We ordered omelets and potatoes, Jenny got hot chocolate, and we checked the comments on the blog. We laughed, smiled, and “ahhed” at all the funny and sweet things people say. The comments always put us in a good mood.

We didn't quite finish both omelets, so we packed up half an omelet to take with us for later. We stopped again right away to buy some cherries at a roadside stand. It was sad we couldn't eat them right away because we were stuffed from breakfast, but we did eat some after we found the wonderful bike path again. 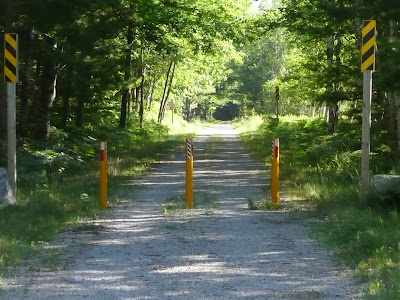 The bike path often had these posts so that the cars couldn't use it. We fit through them easily enough, but it was close. We are proud to say that we never hit one, much to Jenny's delight. Brett is such a good driver. 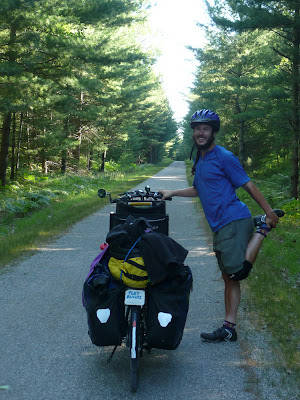 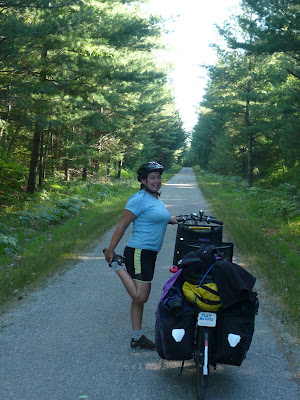 Jenny stretches.
Mullet Lake was beautiful to bike by, and we really enjoyed that. The path passed by so many houses on the large lake, but also lots of open spaces so we could see the shores and the beautiful reflections of the sun on the water. Everything was going so smoothly, and then disaster struck.

Well, not really, but our odometer died. The little computer on our bike that tells us all the little stats is a constant source of entertainment, distraction, and joy for us. Brett reads the stats back to Jenny. Jenny guesses how far we've gone. We also use it as a tool: how far to the next campground? How far to the next highway? There were two sad faces when after long efforts to get it going again, we declared that either one of the batteries needed replacing or the unit had died for good. 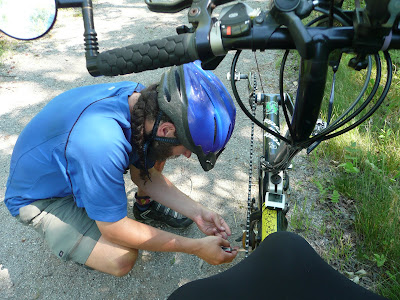 We tried to fix the bike computer, but no such luck.
Noting the next crossroad so that we could figure out later how far we went, we continued on unhappily. We'd heard there isn't a good way to go straight north in that area, so we took the path to Cheboygan, on the shores of Lake Huron. There wasn't much in the downtown, and we ended up picking a restaurant for lunch, seeing that there was a wireless Internet signal there. Unfortunately, their connection didn't work, and we ate a fairly expensive meal that was only so-so.

Going back outside into the terrible heat of the day from the air conditioning was rough. The whole afternoon was rough, because of the heat. We started working our way northwest on the Route 23, but then did find a way to the path that parallels it. Back on the path, we still found no relief from the sun's constant heat. At least it was quieter than the road. We crept along, craving a place to go swimming.

Then we spotted a roadside park that bordered the lake! We eagerly cut across from the path to the road and into the park. Once again, though, we found it wasn't really suitable for swimming. We did meet a whole bunch of nice people there, however. It was fun to talk to a fellow recumbent rider, and share our stories with a group who took us in and fed us watermelon, “haystacks,” and fudge. The park also had deliciously cool water from the hand pump. No swimming, but at least we left somewhat refreshed. 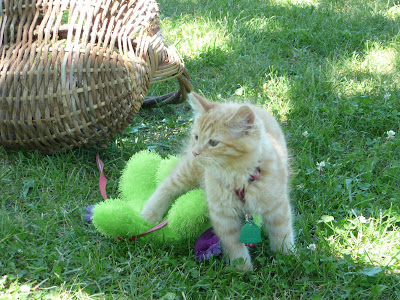 One of the nice people we met at the park had brought their cute little kitten with them. She was having so much fun pouncing on grasshoppers. 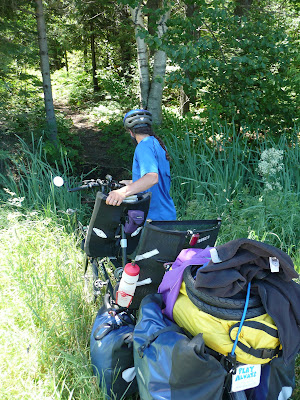 We found a place to cut through back onto the bike path. It was a little steep and muddy. Jenny's foot got wet while helping push the bike up onto the path. A few minutes later we spotted another path that we could have taken that was nice and flat and not so wet. Oh well.
We got back on the path, and were a bit frustrated when a beautiful monarch butterfly wouldn't land to have her/his picture taken. Oh well. We tried to push onward a little faster, and there were finally a few patches of shade here and there, but it was just so hot! It was only a few more miles before we hit the touristy Mackinaw City, where the bridge is. We weren't sure where to go to ask for the ride over bridge.

In our investigating, we did find a fun place to go in the water: right at the base of the bridge! What a cool view of the bridge we had, from almost underneath its massive supports. The rocky shore wasn't fun to step on and it wasn't deep anywhere near shore, so it was hardly “swimming,” but it certainly did cool us off some! 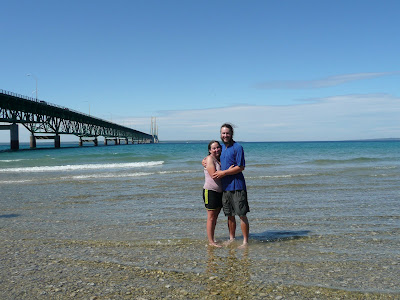 In front of the Mackinaw bridge. 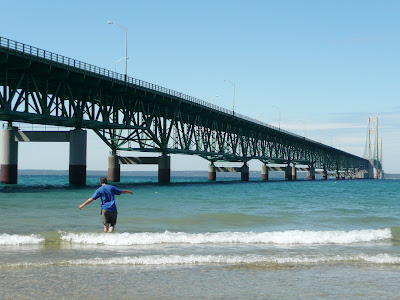 It was very rocky, but that didn't stop us from going in the water. 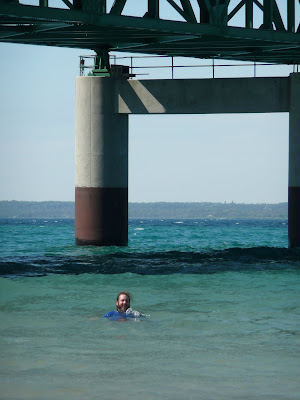 Brett swimming under the bridge. 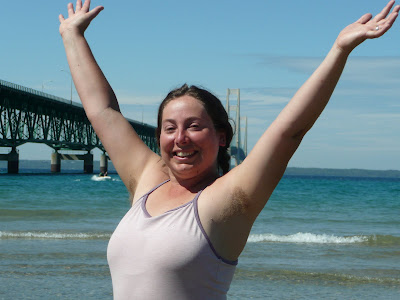 Jenny is excited to go swimming too! 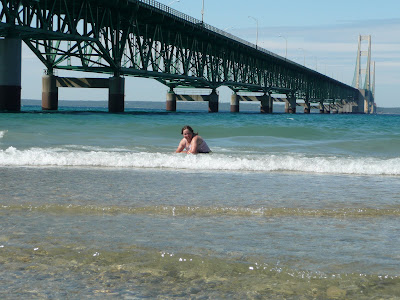 In the waves.
Finally, we asked at a museum where one would go to ask for a ride across the bridge. No one knew about getting a bicycle across, but they did direct us to the booth where people can call the Bridge Authority for escorts across, or if they are too scared to drive their own vehicle across. The bridge is five miles long (including approaches), after all, and it can get really windy up there! We picked up the phone that connected us to the Bridge Authority, and they said they would send someone down. In a few minutes, Greg arrived with an official pick-up truck. We loaded the bike and our gear into the truck, climbed in the cab, and set off across the immense Mackinac Bridge. 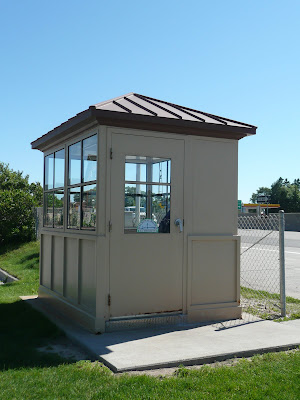 Inside this little booth is a phone that you pick up to call for a ride across. 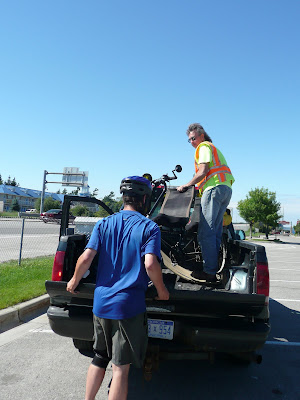 Our second time on this trip putting our bike in a truck to cross a bridge.
From up on the bridge, the water below in the Mackinac Straights was so beautiful. It was an amazing view in general, being up so high. We asked Greg about the history and use of the bridge, and marveled at the low barriers on the sides of the bridge. At the far side, as we touched down into the U.P., we thanked Greg and paid the two dollar fee for the ride inside the office there. 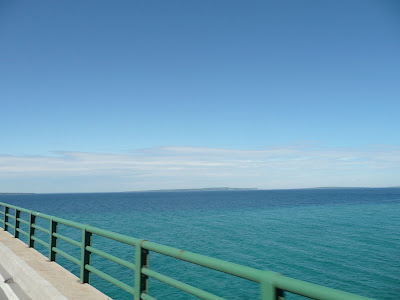 Beautiful view of the water over the short railings on the bridge. 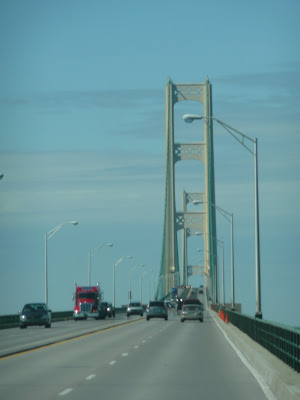 The view of the bridge from the top. 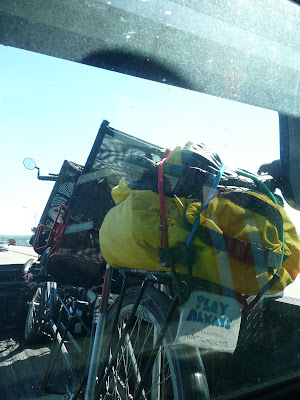 Our bike didn't fall out. 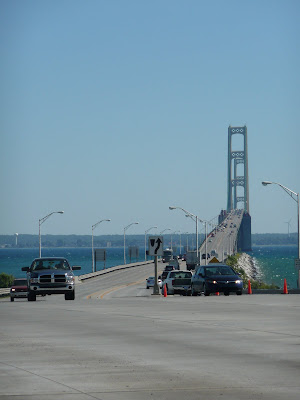 We made it to the other side!
Our first order of business after that was to try to get maps and information at the visitor center. The man there was very helpful, taking his time talking to us about our trip and giving us as much information and as many maps as he could. When we left, we had to ride a tiny way on the big highway, and then we got off onto the slightly smaller Route 2.

Route 2 was really busy and loud, and it was packed on both sides with tourist traps and gas stations. We didn't have a choice about our route though, so we tried to ignore it. We stopped and Brett ate the rest of the omelet from breakfast, and we shared the cherries from the morning. Jenny was still hungry, so we stopped and figured we would try a pasty.

Pastys (pronounced past-ees) are a trademark of the U.P. They remind us of a pot pie that you can hold in your hand and eat. The one that Jenny got had potatoes, chicken and carrots in it. It was SO delicious! After we finished and started biking again, we wished we'd gotten another one for later.

As we biked further west on Rt. 2, the scenery was beautiful. The traffic lessened once we got away from the bridge and we biked slowly past many wildflowers, sand dunes and views of lake Michigan. We were looking for a campground, and there were a few on the map not too far away. We were getting pretty tired, and it was getting dusky. 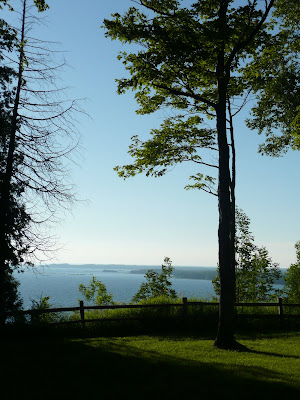 The view from a roadside park we stopped in to take a break. 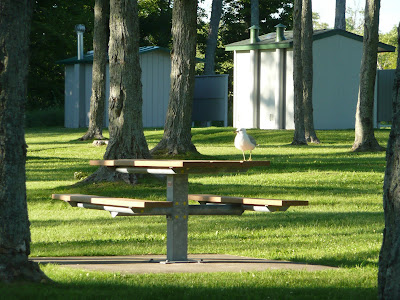 There were seagulls EVERYWHERE. Even on the picnic tables. 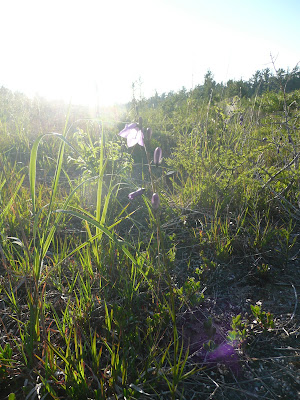 This purple flower was so pretty in the sunlight.
The first campground we came to was a National Forest Campground, but the sign said it was full—no surprise on July 4th weekend. We tried calling a phone number listed, but there was no answer, and we didn't feel like checking all the sites. We moved on. The next campground didn't seem too much further, maybe 7 more miles. However, when we got to where we thought it would be, right off the road, there wasn't much there. We went a little further and saw a sign for Little Brevort State Forest Campground, but it didn't say how far. We were really confused, and by this point our fatigue made decisions and navigating hard. 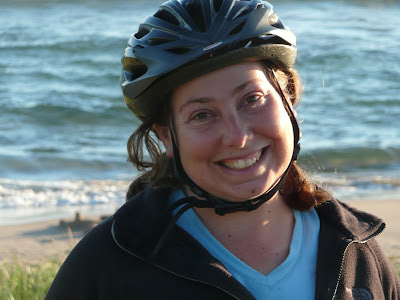 Jenny is tired but happy. 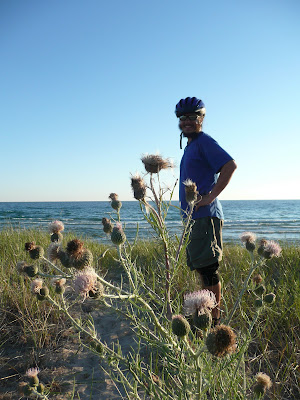 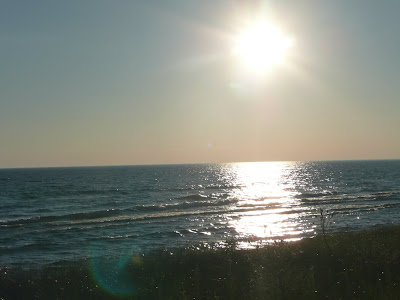 The sun setting over Lake Michigan.
We followed the signs (uphill), and finally found a dirt road that seemed to be the driveway (we hoped). Brett moaned as we went downhill in the dark, but Jenny reminded him that it probably wouldn't be such a bad climb the next morning. In the end, we did find the campground, and there were a few open spots. Before picking a place to set up camp, we watched some far away fireworks over the lake and felt very grateful to be together on such an amazing adventure. 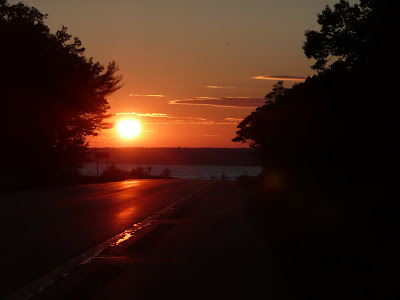 One of the prettiest sunsets we've seen so far.
Posted by Jenny at Saturday, July 03, 2010