Waking up in a small hotel room in a place you've never been isn't that much different than waking up in your familiar tent in a different place every night. However, a bed is little different than our comfy air mattresses and familiar pillows. This morning it was nice to wake up and cross the room for a shower. We enjoyed not having to pack the tent up, and we cooked a little breakfast on the front step before we backed the bike out of the room and loaded up at 9:45.

Before we set off west, though, we went back to the cafe we'd been at the evening before. We used their wireless signal to post another update to the blog. While we were there, we waved to a fellow touring cyclist also headed to the west. Seeing us wave, he turned in and we started to chat. His name is Tom, and he's riding from Maine to Washington. We finished up and set off before he was ready to leave, but we figured he'd catch up to us soon after. 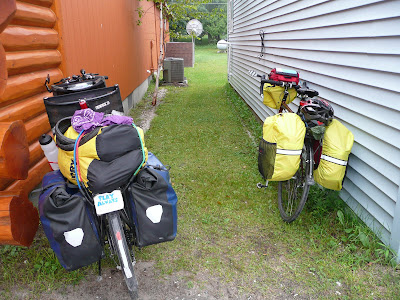 Two touring bikes, all loaded up! 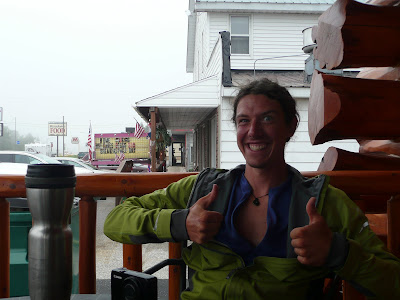 Tom, on the wet morning we met him. He always seems to be upbeat and positive!
Maybe it was the inspiration of having another bicyclist coming along right behind us, but we got off to a pretty good-paced start by 10:30. Tom didn't catch up until we stopped to stretch. He passed us, and when we were done stretching, we got back on our bikes and were able to push hard enough to keep him in view for miles. We were cruising! On the uphills, Tom would pull further ahead, and on the gentle downhills we would make up the distance. When he paused to take a picture, we passed him! 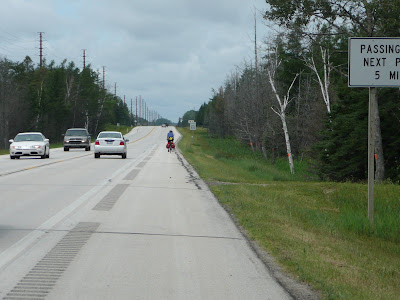 Chasing our new friend Tom down Route 2 heading west!
When we stopped again, this time for lunch around noon, we saw him pass by a few minutes later and we waved through the window of the cafe we'd stopped to eat at. This was only our second break of the day, and we were feeling good. We weren't sure we'd see Tom again, because more than an hour had passed before we had finished eating and were ready to leave.

However, we kept pushing because we felt so inspired and the roads were really flat. We were delighted to see Tom again when we pulled into a grocery store in Manistique! He was just about to leave the same store as we pulled in and it was fun to talk about food choices with him. It was fun to hear Tom say that he also searches for foods without high fructose corn syrup and hydrogenated oils, two of the main ingredients Jenny tries to avoid. Again we said hello and good-bye, not expecting to see him again. We took our time food shopping, getting enough supplies for the next couple of meals, and then checked a nearby store for a battery for the bike computer. No luck, and the hardware store in town was closed. 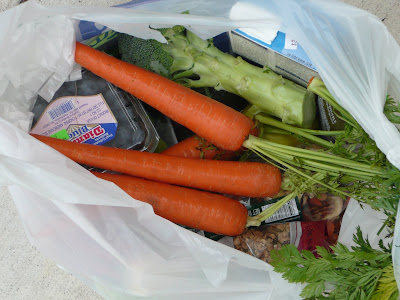 Groceries.
The rain started to fall shortly after we packed away our newly purchased food and started riding west again. It wasn't a hard rain, but consistently wet. After about an hour of riding, we were pretty damp and the rain started falling even harder. We were almost to our destination for the night, and weren't sure about stopping, but as we pulled into a roadside rest-stop to use the bathrooms and fill up our water bottles, there was Tom! He was cooking his dinner under the overhang out front. We decided to join him and cook up some food ourselves, since it was now pouring. Sometimes things work out better if you don't plan them. Eating dinner together, we found out more about Tom and his trip. He is from Ohio, and like us, is doing this bike trip for fun and because it's something he's always wanted to do. We had a lot in common, got along well, and having good company was a nice change. 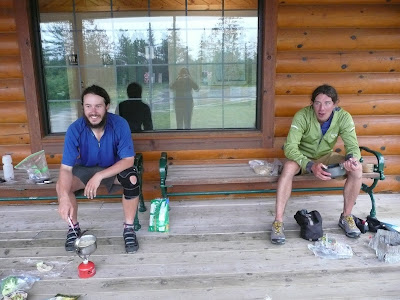 Cooking at the rest area with Tom.
We ate pasta, chicken sausage, broccoli, cheese and spices. Om nom nom!
The rain was a little lighter when we finished cleaning our dishes and left the rest area. We pulled out first, but Tom wasn't far behind us. We were all headed for Nahma, where there was a campground. We turned off of Route 2 for the first time all day to head south about 5 miles to No-Nah-Ma campground, which was completely empty on this Monday evening. We pulled in and picked a spot, and Tom found us when he rode in a bit later. We set up in the wind and a light rain, used the vault toilets, and said good-night to Tom. 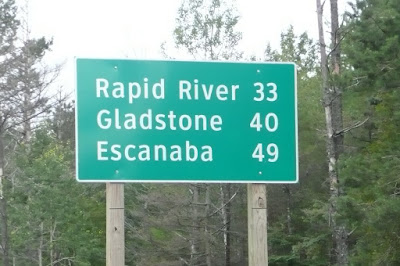 It's fun to see the distances to other places shrink throughout the day. We hope to make it to Escanaba tomorrow, especially since they have a store with a battery for the bike computer!
Since it was raining again, and we were tired, we snacked a little in the tent and went to bed. It was a low-key ending to a great day of riding. We didn't have our computer, but Tom told us we'd done about 70 miles! We had topped our longest day of the trip, without much difficulty, and our average speed was so high! This is the kind of riding that we had expected to do when we were planning this trip!
Posted by Jenny at Monday, July 05, 2010