Today was our 25th straight day of biking! We were up early and ate breakfast on a picnic table by the water while we tried to use the Internet. The signal wasn't strong enough and that was frustrating. We were able to get going by 8:30, an early start. Biking back the 4 miles we came south went quickly, but it was hard to get motivated once we were back on County Road B, headed west. We did enjoy seeing several bicyclists out this morning, some on road bikes and some on mountain bikes. 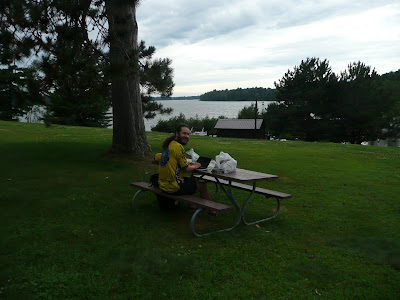 Breakfast in the quiet morning.
It was cloudy and cool most of the day, good riding weather. We just couldn't get in the groove of biking. Nothing seemed to be going our way, or we just couldn't see it. When we got into town, we stopped first at the grocery store. We were really hungry, so we ate some chicken right away, but also bought cherries frozen sausage, coconut pineapple juice, chocolate and sunscreen.

We were still hungry, so we asked about pizza places, and one came highly recommended. We tried the pizza and salad buffet again, but this time the food was pretty poor, particluarly the pizza. Ugh. We did get to use the wifi and we looked up some maps on line, but it didn't really make up for the crappy pizza.

Leaving as soon as we could (the waitress took forever with our check), we were glad to be out of that town. None of the people in that town seemed to be happy; none of them waved to us or hardly even smiled. However, the going was still really slow. Jenny was really tired, and the roads were really busy with cars and big trucks. The scenery wasn't even that nice, as we were biking by huge piles of wood and industrial plants.

Eventually things did get better. We broke out the cherries, and enjoyed those. We watched a big flock of sandhill cranes off a ways in a corn field. Then, we turned off the busier roads onto smaller ones. We also made things better ourselves. We played a game of word association, and soon thereafter were holding our sides and unable to pedal because we were laughing so much! 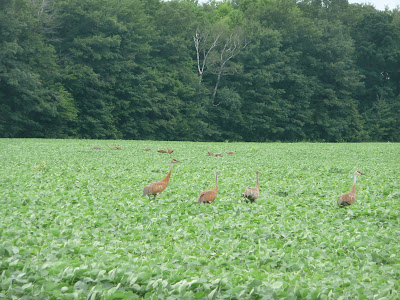 A whole flock of sandhill cranes.
The terrain changed a bit, too. We turned west on County Road F, and we were going up and down all kinds of small and medium hills. Still, we really couldn't find the groove. We tried singing our favorite songs, and that helped pass the time, but we still didn't seem to be going very fast. Brett tried calling home and talking to his dad. Jenny tried taking pictures of flowers. It all helped some, but nothing seemed to make any of the riding easier. 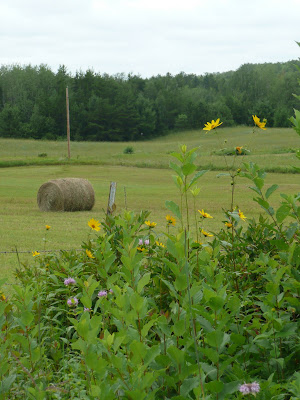 There were so many beautiful photo opportunities today. 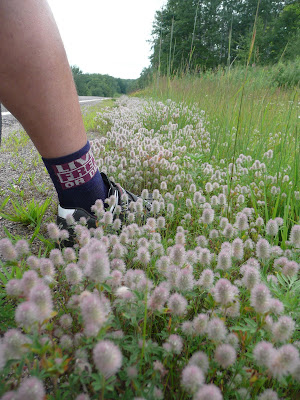 Brett's foot amongst the flowers. 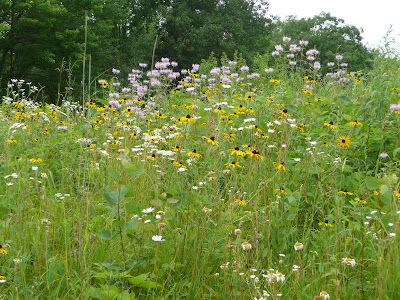 Beautiful flowers along the road. 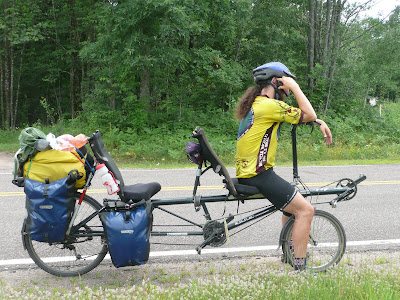 Brett talks to his dad while we take break.
Then the rain started. It was light at first. As it was starting, we stopped and used a porta-potty at a tiny bar (a small garage with alcohol, really). Then the rain really fell hard. It was windy, and on the downhills, we were pelted with raindrops as we coasted. Now we were pedaling harder. Maybe the rain woke us up. 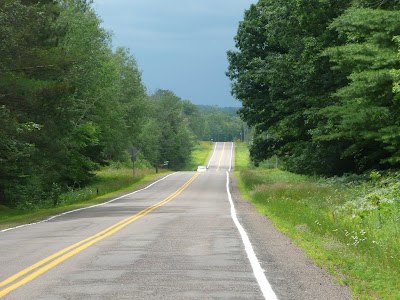 We stopped at the top of this hill to take a picture because we were so excited to go down after having just biked up the other side.
After the rain stopped, it got really hot. We just kept biking. We were going better, and we just kept it up. It was all a bit of a blur until we got to Danbury. There we stopped to cook a meal. There is a casino there, a few little stores (gas, fireworks, ice cream, groceries), and we spotted a picnic table next to the fireworks shop. It was in the sun, but by now we just wanted a place to sit and cook. We made sausage, zucchini, coconut curry (with pasta and cheese), and fought off bad moods. Splitting an ice cream cone for dessert helped. We were tired, hot, and almost sunburned, but we were so close to Minnesota now. 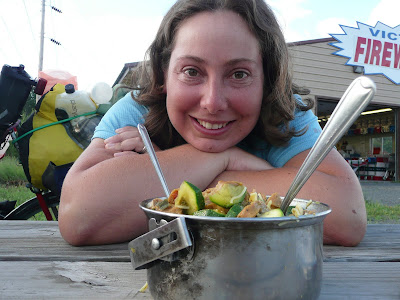 Jenny is ready to eat dinner. 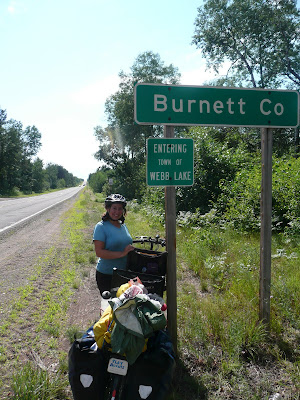 It's always fun for us to cross into a new county.

All day we had hoped to make it to Minnesota by nightfall. We kept asking each other if we thought we'd actually make it, and we weren't really sure until we got to Danbury. From there it was only a matter of a few flat miles to the border (the St. Croix River), and we were across!

We found a campground only a mile or so after crossing the border, and even though it was up a hill, we were fabulously happy with ourselves for having biked our longest day yet, making it to Minnesota, and having made our goal of making through Wisconsin in only four days! We pulled in to the campground and set up our tent slowly, enjoying the fact that there was still plenty of daylight. Jenny even found the energy to sew an elastic strap onto our sheet that goes over our sleeping pads so that they won't slide apart anymore! Brilliant!

We took showers and brushed our teeth, and then fell asleep content, excited, and exhausted. 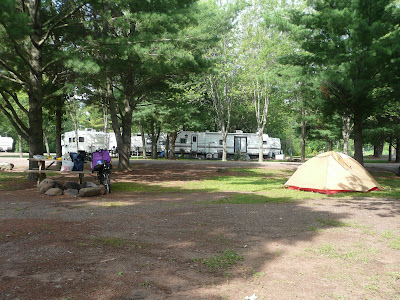