Jenny just couldn't get to sleep last night. She lay in the tent trying to fall asleep for hours. Not wanting to disturb Brett with her restlessness, and giving up hope that she would fall asleep, she eventually decided to get up at 3:30 and see what the world looked like in the middle of the night. Discovery: It's really dark outside.

It's frustrating not to be able to fall asleep. This is the first time this trip that Jenny hasn't slept well. Every once and a while at home she will struggle with restlessness at night, but for whatever reason, be it the extra exercise from biking, or the comfortable sleeping pads and pillows we brought with us, she has slept great on this trip up until tonight. We both hope that it won't become a pattern.

By about 6am, she couldn't take it anymore and giddily woke Brett up. “Let's go! Let's go!” she said. Brett took a little coaxing, but was eager to make an early start, so we were gone before long, looking for a good breakfast place. It took us a while and then actually asking someone to find the true downtown of Miles City. We found a diner right on Main St. We were disappointed to learn the wifi was for the owner only, but we ate our breakfast and thought about the day to come.

The plan was to find the bike shop in town and buy a new tire and a spare tube for the rear, since we were now riding on the spare. We were thinking about possibly getting the bike tuned up again also, but we thought we'd just wait and see how the bike shop seemed and how busy they were. After breakfast, a few minutes more down main street we found the shop. Not open until 10:00, the sign on the door said. Sometimes getting up so early has it's drawbacks. We decided to wait the hour and a half because as tempting as it was to bike on, we knew we might not see another bike shop for a while and not having a spare tire made us nervous. We found a little park close to the shop and settled in to rest and do some writing while we waited for 10:00 to roll around. 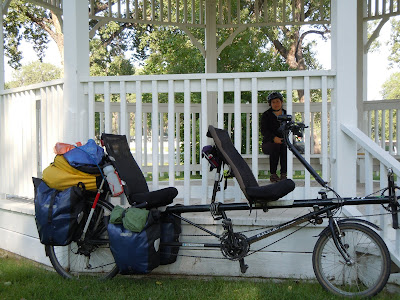 Jenny sits in the gazebo and tries to write on the blog.
Jenny was understandably tired. She tried to rest some in the park, but it's hard to rest sometimes, especially in public places when you are overtired. We ended up writing a little and working on the blog in general. Mostly, we were waiting. As 10:00 approached, we checked back at the bike shop, but no one was in early, so we spent our time looking for free wifi signals. We found one just barely strong enough, sat on the curb where it seemed to work, and checked a couple comments. The rest of the time before 10:00, and for about twenty minutes after the hour, we just waited for the shop owner to arrive.

We weren't the only ones waiting. Another touring cyclist was there as well, and the shopkeeper's assistant was also there. There was a local bicyclist there for a while with a tight tire that he couldn't get off his rim, so Brett used his tools and did it for him. There was even a bike sitting in line, waiting without an apparent owner. When Miles did arrive, we all trooped in behind him. Miles is a loud man, with a friendly but slightly cynical outlook on life, and he bustled around the shop helping others while we picked out what we wanted: another spare tube for the back, a new bike computer (wired, not wireless), and a new tire for the back. He was so busy we skipped the possible tune-up.

By the time we finally left the bike shop, we were hungry for lunch. On our way back to the main highway, we passed a health food store and pulled in to see what they had. We found Mana Bread! We also got some dried fruit, but they didn't have enough to do full shopping for the day. After some time with their wifi, we made it to an Albertson's (supermarket) on the main drag near the highway. Now we were getting pretty silly, possibly from the tiredness and the heat, but maybe just in mimicry of the crazy day we were having. 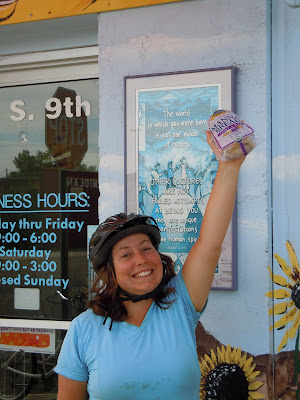 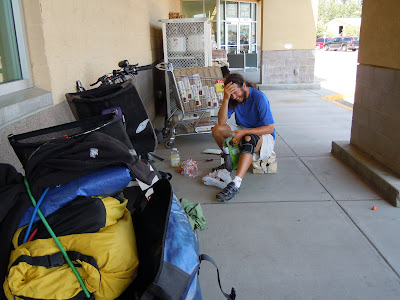 What's so funny? No idea, really...
Did we mention it was hot? HOT. Today would be our first on the big highway, Route 94. Underpasses were our saviors today. Jenny was so tired and sleepy from the heat that it was tough for her to stay awake. Brett was just hot, but that was enough. At one of the underpasses we parked the bike and climbed up into the shade to rest for a while. It wasn't that comfortable though, so we didn't stay very long and we left feeling only marginally better. 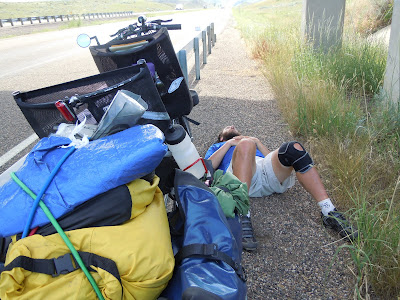 Brett takes a rest beneath an overpass. 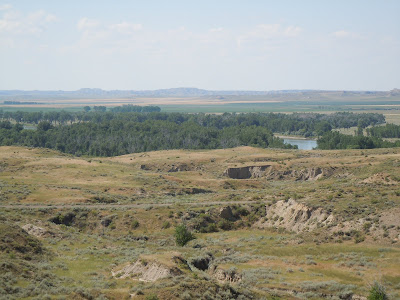 It was brutally hot, but we still took note of some of the beautiful scenery.
There were also hills to climb today. Just when we were starting to give up hope for the day, Jenny started a game of “guess the word.” We took turns saying things like, “Okay, four letters and it starts with 't' and ends with 'e''' and the other person would try to guess the word. After we warmed up, we started giving each other harder and longer words. We must have played this game for at least 2 hours (or what felt like it). It really got our minds working and distracted, it woke us up, and the miles passed faster without us noticing. 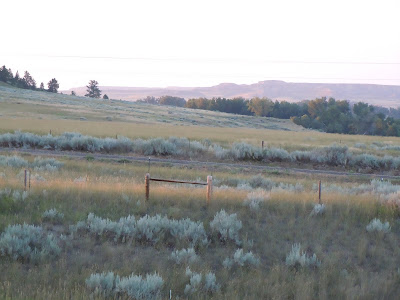 Rugged beauty.
A bunch of miles before Forsyth, we found a rest area where we took a break in the shade and filled up our water bottles. We spoke with a nice couple who are in the Scottish weaving business and drive around the country to festivals to sell their tartans and such. We also met Ben, who was driving back home to Washington from Chicago. He was very friendly and easy to talk to and he took our picture. He said he might camp at the same place as us tonight. We were all tempted to camp at the rest stop, but we decided to abide by the “no camping” regulations. 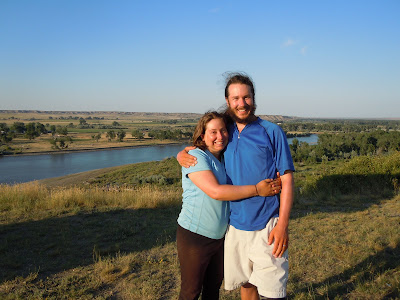 Thanks to Ben, here's a nice shot of us with the Yellowstone River Valley in the background. 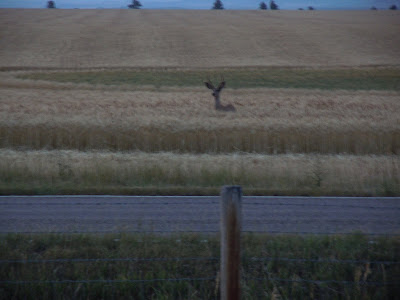 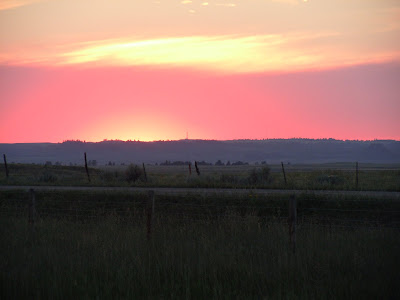 Such pretty sunsets out here.
It was dark by the time we reached Foryth. We found an all-night diner in town (probably only in business because of the large train yard literally across the street) and decided to get some food before looking for the campground. We got directions to two different campgrounds, and set out, filled with cheeseburgers. We checked out the public one first, but it was kind of creepy because no one else was there, and we couldn't see well where things were. We backtracked some and ended up at the WagonWheel Campsite.

We pulled in, it was dark, and we couldn't make out much, but figured we'd pull into one of the empty spaces, set up for the night and go to sleep. We had just picked a spot, when out of the darkness (well, there may have been a streetlight around somewhere) we heard a real old-timer's voice: “Ken I hep yew?” He wasn't shy, so his voice was loud. Brett talked with the nice old man who ran the campground, and he decided he could take a check and we could pay in the morning. We won't forget his laugh, or some of the things funny ways he said things for a long time. We then walked around looking for a different spot, but ended up back where we started. Setting up the tent in the dark is not really a problem since we know it so well, and we have our routines down pat, so little is said once we set to work. Then, we made sure the bags were closed against any rain that might fall, and went to sleep.
Posted by Jenny at Wednesday, July 28, 2010