Another very hot day awaited us when we woke up this morning in a very large bed. Torn between riding and taking some time to work on line was hard for us this morning. We were overwhelmed with all that we wanted to accomplish, decisions to be made about things back home, and how WE were getting home, so we stayed in the motel room until close to 11:00 working on things.

With bags of ice to keep the food cool, we crossed the street to buy some supplies for the day. Bread, chocolate, beans, water, cheese, chips, and some sandwiches for later all got purchased and then put in our bags, and we also got some food to eat right then. There were so many things strapped to the top of the bike today!

Leaving wasn't easy in the heat. It was wicked hot. Much like yesterday, we wondered if we should really be riding at all. In the parking lot, we found a bouncy ball. Jenny took it along and after we got going, she bravely dropped it as we were rolling along, and it came right back to her hand! She caught it, and we kept going, much amused. Sometimes it's the little things in life...

The temperatures were high, but the country was beautiful. The scenery changed gradually to more large sandy hills. We stopped for pictures several times, each time thinking it couldn't get much more pretty. We did keep hoping for some shade or a cool breeze, but in 97 degree heat, in North Dakota, there isn't much you can do but drink water and keep riding. 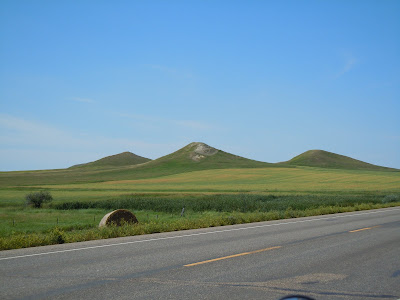 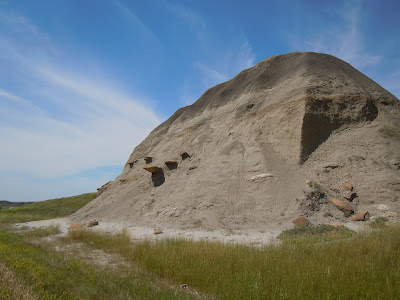 Then it started to look more like this. There were so many pictures to take today. 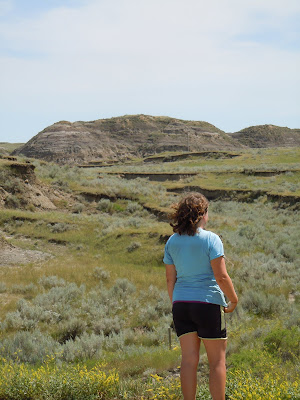 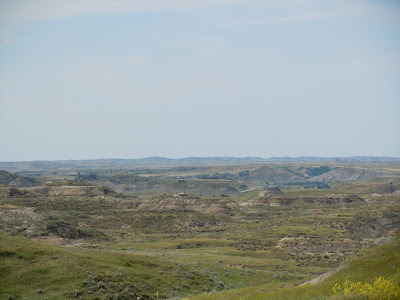 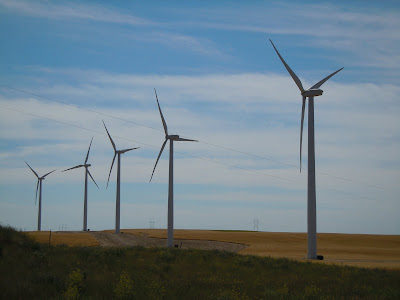 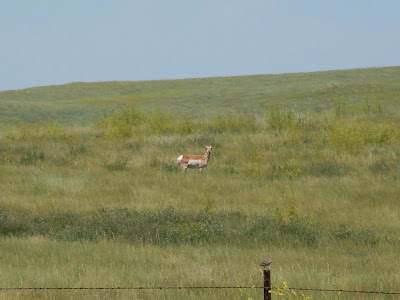 This is a boingy deer. When it runs, it resembles a kangaroo. It's just standing there right now, but maybe you can imagine it. 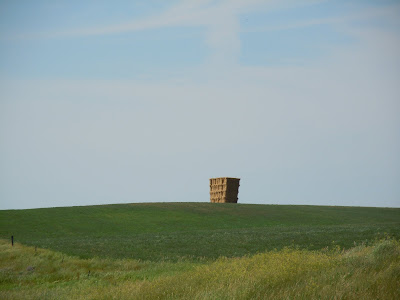 Hay. Doesn't it look like it's going to fall over?
We were excited to make it to the last town in North Dakota along Route 12, Marmarth. Coming into town we saw signs for road construction, and indeed the road was dirt through the very small “town.” We sought out juice and ice cream sandwiches at the little store/cafe there, and spoke with a few locals. With our cash supply dwindling, we bought a big bag of ice. It was bigger than we needed, so besides filling bags with it to keep food cool, we also filled our water bottles with it! This turned out to be a great thing, and we didn't let any of that ice go to waste (unless you call a few ice cubes down a couple shirts a waste). 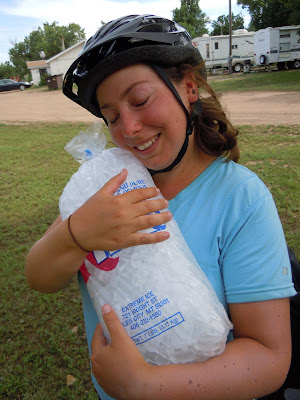 Ice is nice.
While the ice was being stored, we also ate our sandwiches bought at the start of the day. We also drank lots of water. We drank a ton of fluids today in general, and perhaps that explains the better success we seemed to be having in the heat, though it was still tough.

Once the ice was all packed or melted and our hunger was satiated, we got back on the bike and back on the road. We weren't more than a mile outside of town when we hit the real construction. There was a line of traffic, waiting for the okay to go through the work zone. After a while, the traffic in the other direction started coming through. We were offered a ride by some of the workers, and one of them, Wendy, seemed particularly impressed with our trip. We asked them how bad the road really was up there and Wendy said it wasn't too bad, so we thanked them kindly but said we'd ride it.

We didn't know exactly what to expect, but the road was pretty much completely gone. We were shunted off to the side onto dirt that looked like it had only been packed down by one day's traffic (or less). We were nervous, but pretty confident that we could ride it, and we did! We didn't quite keep up with the speed of the other traffic, but when we got done and our kind escort behind us pulled alongside to turn around, he said we made it through better than some cars. Heh. We're good. It was fun! 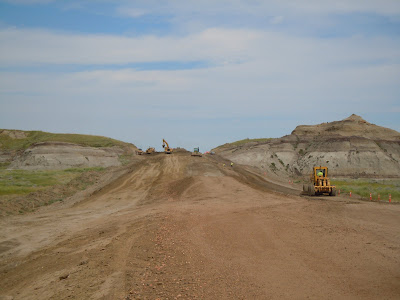 Um, where is the road?
Marmarth was only 5 miles from the Montana line, so once we were through the construction zone, we knew we were close! We made it over the line, and then found a fun sign awaiting us. We read it, and then Jenny decided it would be fun to climb up on top of it for a picture. Once spoken, an idea like that is hard to shake, even though getting up there proved a bit more difficult that originally thought. 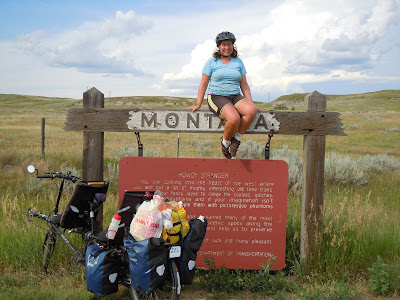 Welcome to Montana!
With a little help from Brett, Jenny managed to get herself up on top of the sign, and sat there long enough for a few pictures in a few different positions, before it became a little scary and it was time to come down. Still, we were having such a good time today! 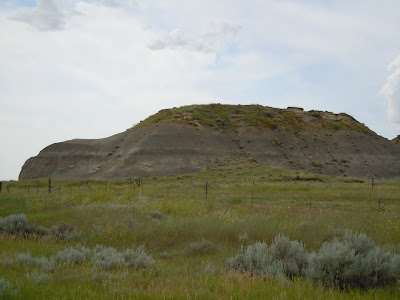 We named this Turtle Rock because it reminded us of Turtle Rock on Bustins Island in Maine.
Off in the distance, we saw clouds that looked like they might make a storm, and we had been told by one of the construction workers that we'd hit rain before too long. The storm never got near us, and we never really even got much shade from the clouds, which was annoying. We were really rooting for that storm to come over us and drop some nice cool rain!

Onward we pushed, seeing something we hadn't seen before on this trip: oil derricks. We might have seen one or two on the North Dakota side of the line, but after we crossed into Montana, it seemed almost as though we were surrounded by them. Suddenly, we thought of one more song we could sing that we knew most of the words to! “Grandad worked the derricks, way back in '23; I swear the oil got in his veins and he passed it on to me. Work-over riggin' and wildcat diggin' were the things I knew there, and the smell of crude on the oh my dusty Oklahoma air.” Bill Staines again, this time “Prudhoe Bay”. We were very excited to have another song to add to our rotation. We still aren't sure of a verse or two, but that doesn't stop it from being fun to sing! 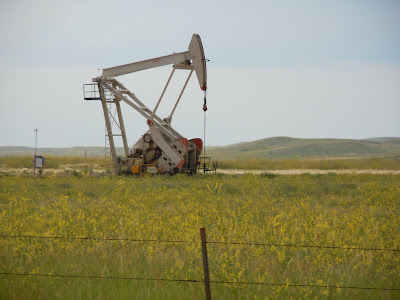 We passed so many of these today. 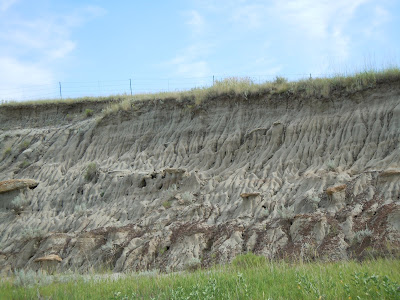 Such interesting patterns in the sandy cliffs!
Finally, we made it into Plevna, our destination for the night. We had passed through Baker, MT trying to get as close to the long stretch without any services as possible. There may not have been services in Plevna either, but there was a playground/park right next to the train tracks. It had vault toilets, and a water spigot, but not much else. It turned out to be extremely mosquitoey, too.

As soon as we got to the park and knew we were done, Jenny began feeling quite ill. We suspect it was a little bit of heat stroke. She was in charge of setting up the sleeping arrangements inside the tent, and it took her a long time, but she managed. Brett was in charge of cooking a meal to get some food in us. He was really tired, too. We both had gotten too much sun, and we were a little sunburned in places.

We enjoyed a meal of pasta, red sauce, broccoli and garlic in the tent. Jenny was feeling a little bit better after having rested some while Brett was cooking. After dinner, Brett started too feel way too hot, so he went back outside and washed the dishes, and himself, in the cool water from the spigot. As we lay in the tent tonight, we worried about ourselves and our bodies holding up in the heat. Jenny was nervous that she would still feel bad in the morning. We really wanted to make it to the big highway and the big city tomorrow, more than 70 miles away. We decided to just get some sleep and try not to worry. We would see how we felt in the morning. Of course, the multiple trains that rumbled through in the night, blowing their loud whistles literally about twenty feet from our heads didn't help much. 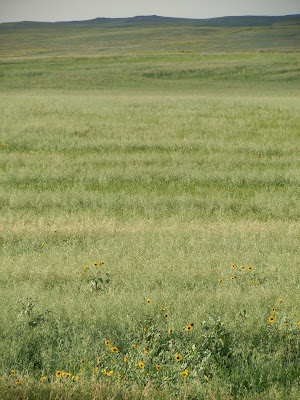 One of our favorite shots of the day. We're a sucker for sunflowers.
Posted by Jenny at Monday, July 26, 2010