Sometimes we wake up feeling pretty good. Today was not one of those days. We awoke tired and sore from our long and eventful previous day. Plus, the bike computer wouldn't start working again, no matter what we tried: moving the sensor to different places in relation to the magnet on the spokes, taking the battery out and putting it back into the sensor, etc. We weren't in good moods anyway, and the lack of our beloved cycle computer made things worse, and it wasn't until 11:10 before we finally left the campground.

Jenny was right, though: we didn't have to climb any enormous hills (that Brett felt so sure the night before would be straight up). On our way back to the paved roads, a monarch or two came flying by and landed on some milkweed plants. Jenny spent a while taking pictures and and got a couple decent shots. It was really beautiful out and our bad moods started to lift a bit after the short stop to watch the butterflies.

Watching this butterfly lifted our spirits.

We made it back to Brevort (on Route 2), and found a little motel/restaurant to eat at. Breakfast was disappointing because Jenny's order got mixed up and someone else's food was brought to her. By the time the right food was prepared and finally delivered to our table, Brett was all finished with his breakfast. The food wasn't even that good. We considered getting a couple pastys there for our next meal, but it didn't seem like a good idea. We figured we would wait and there would be better spots, since it seemed like every store we passed sold them.

We biked along for the next few hours, making short stops to fill up water bottles and stretch. We crossed over the Cut River Bridge and continued to have beautiful views of Lake Michigan along Route 2. We took a longer stop at a roadside park that happened to have a wireless signal coming from a hotel across the road. We worked on line for a few hours, enjoying the shady place to sit and the cool breeze. 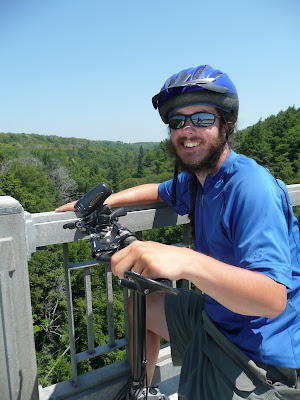 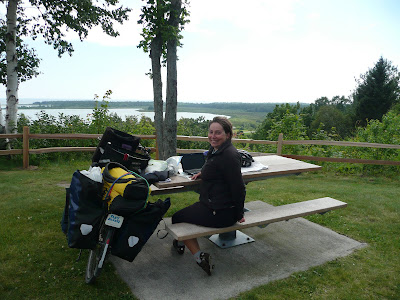 Jenny works on the computer at a beautiful roadside park.
It wasn't until about 5 or 5:30 when we left the park and the Internet behind. Our laptop battery had been depleted, and we tried to psyche ourselves up for biking. Our water bottles were almost empty (the water at the roadside parks tasted gross) so we were looking for a store to fill up our bottles. When we stopped at a little shop that sold gifts and fudge, the owners told us that we should fill up our water bottles at the spring just down the road. They claimed it was the best tasting water ever, and it was just pouring out of a thing that looks like a "beehive". We thanked them, bought some fudge, sat outside in the shade and ate some, then pushed on to find the water source. 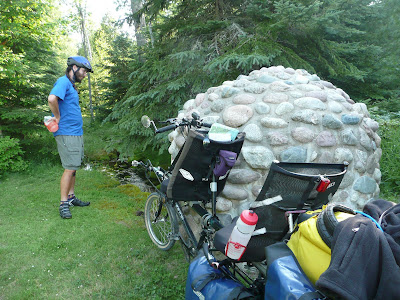 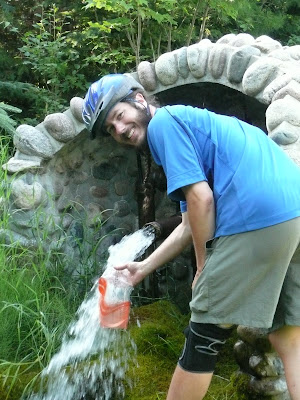 This is what we found! The water that was flowing out was ice cold
and was very refreshing to drink. Brett fills up a water bottle. 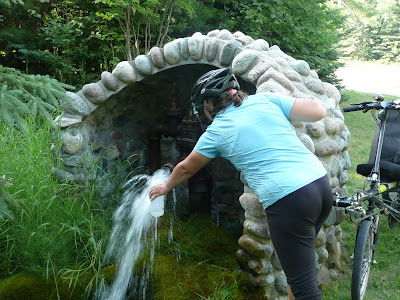 Jenny fills up another. Very shortly after this picture was taken, Brett dumped his newly filled up water bottle on Jenny, which started a water fight. A truce was called after both bottles were empty.
Soon enough, we made it into Naubinway, a little town with a few stores and banks and such. We wanted to buy some dinner, and we wanted to know where the nearest campgrounds were.

Their were some friendly patrons and staff at the only open place at 7:00 P.M. on Sunday, July 4th. They had Internet, and some knowledge of the area, and talked about the closest campground as less than fifteen miles away, or far fewer if you cut along the private beach road. We even had a kind offer to stay in a man's cabin six or seven miles out of town. But really, we were finished. Wiped. Worn out. We decided to just book a room in the motel in Naubinway, and bike no more this day.

The motel didn't have Internet, though, so we used the cafe's connection right up until they closed at 9:00. Jenny worked on uploading pictures, while Brett reserved the motel room. We also spoke with several other patrons, including Jay and Anne, who were curious and impressed with our trip. Jenny ordered some soup for dinner, and then we both had ice cream cones just before the shop closed. 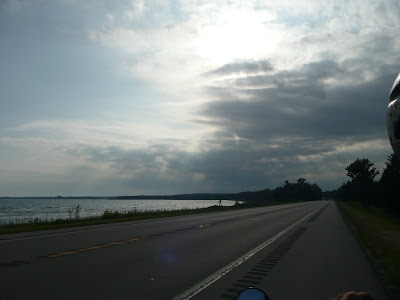 The sun behind the clouds as we bike along Lake Michigan.
Since the motel didn't have Internet, we hoped to catch up on all the days of the blog (about three or four). However, when we got there, we were so tired, we hardly wrote notes for this day, never mind writing nice long descriptions of the other days. We fell into bed, and that was that.

It was disappointing to have gone so few miles, but some days are like that: you just can't get going, you just can't push yourself further, and you just feel like stopping already. We made our peace with that and hoped the rest would do us good.
Posted by Jenny at Sunday, July 04, 2010