The night was colder than we had thought, and we never really slept well until it warmed up in the morning, so we slept late. We didn't even get out of the tent until 10:30! It was a beautiful day, with cooler temperature then the day before, and we took our time packing up camp and writing. By the time we left the campground, it was our latest start of the trip: 1:30. 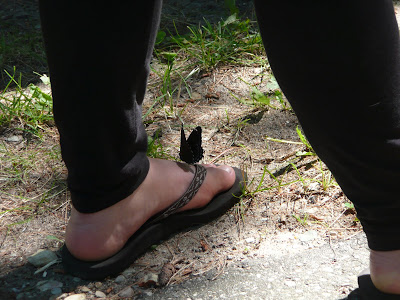 This butterfly stayed around our campsite the whole time we were packing up in the morning. It was so friendly and beautiful. 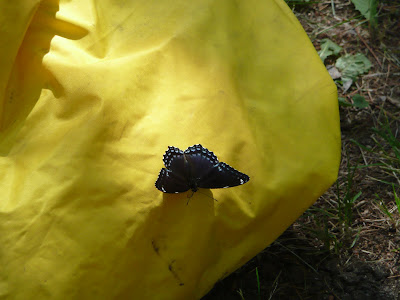 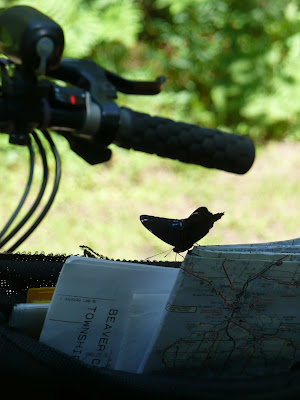 A butterfly on our map. A good omen?
We had been thinking all morning about ways that we could avoid biking back up the big hill we came down in the dark last night: perhaps we could walk the bike the couple mile trail through the woods out to the road, or maybe there was some other road we could take that wasn't so uphill, maybe a ranger would come by with a big truck and offer us a ride up, etc. In the end, we decided it probably wouldn't be so bad and we just biked back up the hill. As it turns out, it wasn't really a hill after all, just a gentle incline. All day long we joked that today was the day of “magical” hills and any hills that we happened to make a mistake and go down, would be flat if we had to climb back up them. We will have to remember in the future that hills we bike down at night sometimes appear to be steeper then they actually are.

Despite the late start, our spirits were high, all the more so when we got to the top of the “hill” and out of the campground. We turned north on Route 93, and found ourselves going up and down medium size hills, real ones this time. Atop one, we stopped to call friends and family: Brett called Dan to congratulate him on becoming a dad and thank him for the stretching tips while Jenny called her parents. Going on a big trip like this makes us appreciate our loved ones all the more, and perhaps vice versa, too. Anyway, it makes us emotional, and we love to connect with people we care about. 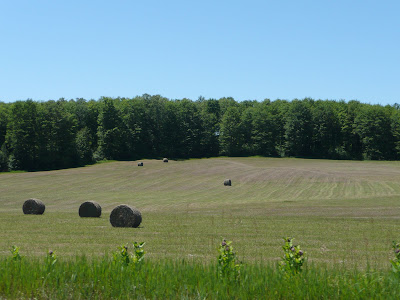 Pretty fields we passed today.
The heat of the day was catching up to us, though, and we were without real meal food, so we were hoping to get to the town of Waters fairly quickly. We had to ask for confirmation on our choice of road one time, but we were right. (It seems just about every time we stop to look at the map or ask directions, we're right or there's a sign just ahead to help us out.) After we caught a glimpse of a “downhill truck sign” we gathered our withering spirits and flew down the hill, right into Waters. That was our first big downhill in a looooonnnng time. 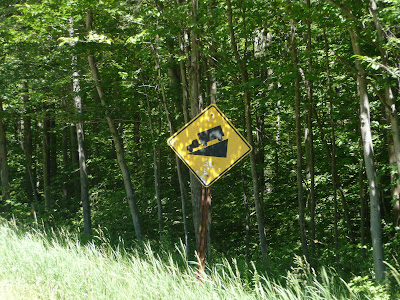 We LOVE downhill truck signs!
We found a place to eat with a wireless Internet signal, much like we had at the Tool Shed back in Munger, but there were some differences. This time, it was only 20 free minutes of Internet, the staff weren't very friendly, the food was only okay (they left off bacon from Brett's club sandwich), and no one offered us directions.

Back out into the heat we went, having used the 20 minutes to post one more blog entry. It was HOT. We pedaled north, now back on Old Route 27. We were grumbling about the heat, when we came to a State Park that had a beach on Otsego Lake. We asked if we could just bike in and swim, and the answer was, “Sure, go ahead!”

Elated, we went and changed, and then went swimming for just the second time of the trip. We had thought we'd find many more pretty rivers and lakes to just jump in along the way, but the rivers haven't been clean-looking or we haven't seen them at the right times. Otsego lake was great, though, and they had fun bathrooms. 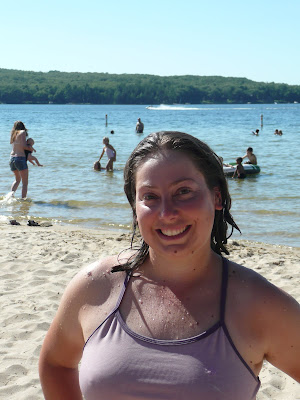 Jenny was so happy to go swimming.
Refreshed a bit from our swim, we changed back into riding clothes, leaving on our wet shirts, and pushed back out into the 90+ degree heat. North on Old 27 once more, we were eager to get to Gaylord for food and a better Internet connection. When we got there, we tried a diner that had deLICIOUS malts, and yummy nachos, but no Internet. We walked across the street a bit, and found a good signal, though. While we were updating the blog with another post, Councilman Joe found us. 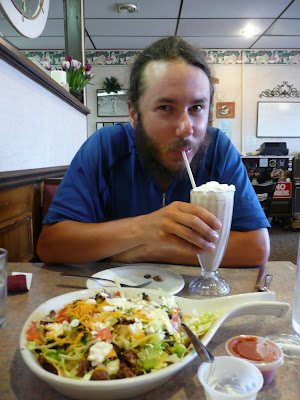 That chocolate malt was one of the BEST treats we've had the whole trip.
Joe seems like a great fellow, and he's also a bicyclist. He excitedly asked about our trip, and offered us a place to stay at his house for the night. He also offered dinner, saying that he had pulled pork in the slow cooker back home! If it had been different circumstances, we'd have gladly taken him up on his offer. As it was, we'd only biked 20-something miles so far, we'd just eaten, and we were anxious to get further along now that it was finally cooling off for the evening.

Joe also reminded us that the long stretch of bike path north started in Gaylord. We forgot to ask exact directions, however, and although we asked a few others, no one had even heard of it. Finally, we decided just to find Old 27 and see if we could find the path paralleling it ourselves. We found Old 27 easily enough, and then saw a sidewalk/bike path beside it. Figuring we'd found the path we wanted, we had just gotten on it when it veered off into a college and then disappeared.

Brett was getting pretty upset because we had it in our heads that we wanted to get all the way to Burt Lake State Park that night and that was still 30 miles away. Jenny was annoyed too, but mostly because Brett was being so pessimistic. She gently reminded him to relax and that was helpful. We biked on Old 27 for a few miles, looking for the path along the road, and for someone to ask directions from.

We asked directions from a nice couple in a roadside park, but half a mile later we couldn't remember what they had said. Was it on the left or the right? We turned off onto a little road on the right and Brett bravely walked up to a house and knocked on the door to ask directions. The friendly man who came to the door told us that the path was just a block up on the road across the other side of Old 27! Yay!

The bike path was AMAZING! It was hard packed stonedust and used to be a railroad bed, so it was very straight and the grade was very gradual. We went down hill for miles! We could sometimes see the highway off to the side of the path going up and down hills, but we just continued to along at a slight downhill grade the whole way to Burt Lake State Park! 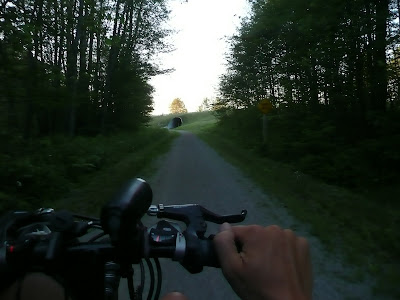 The path we followed was an old railroad bed, so it was flat and downhill for miles! We even got to go through a cute tunnel.
We hardly stepped off the bike after asking directions, so it took us only three hours to go the thirty miles to the park. We got in after dark, but had called ahead and knew there were likely to be spots open. We found the signs on the door at the entrance house, and headed into the campground to check out the open sites. We picked one in the dark, and set up by bike light and headlamp. It felt so great to have gotten to our destination with such a long last push!

Brett took a shower, but Jenny was already asleep by the time he got back to the tent. It was a very long day, but it was downhill quite a bit, as you can see by our net elevation gain of -617 feet!
Posted by Jenny at Friday, July 02, 2010