To recap: Sprinklers and noisy locals kept us from sleeping well, and we had planned to be up early. Brett's alarm went off at 5:00, and we got up shortly thereafter.

Once we made the push to get up and out of the tent, we were greeted by many very persistent mosquitoes. Rushing around packing up and taking down the tent was stressful and we both were sleepy still, but really wanted to get out of there as quickly as we could before we got eaten alive.

On the road by 5:36, our earliest start of the trip, we felt relieved, but exhausted. It was a wonderful thing to have the sun behind us for a little while when it came up! We enjoyed a few cool hours of biking before it started to get hot around 9:30. We were slow, but proud of ourselves for making our plan of starting earlier to avoid some of the heat actually happen.

Thanks to the information from locals we spoke to the night before, we knew our choice was obvious: avoid the Hysham Hills on the Interstate by taking the “old highway.” For the few miles before sunrise, we were mostly going between corn fields. We paused just long enough in our flight from the mosquitoes to grab a banana and a few prunes from the back bag. The sun rose and soon after we turned north to cross the Yellowstone River. 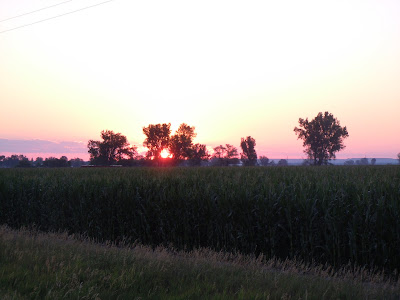 Our very first sunrise picture of the trip?
We paused on the bridge to take some pictures. Then, since there weren't any mosquitoes on the bridge, we stayed for a snack of Manna bread. Brett wasn't satisfied, so he poured himself a pan of cereal and rice milk. Right afterwards, we decided to stay and cook sausage and zucchini! After our lengthy stay on the bridge, we crossed to the other side and began riding through more pastures and a few crop fields. 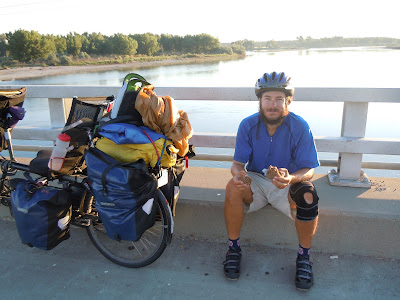 Eating on the (mosquito-free) bridge. 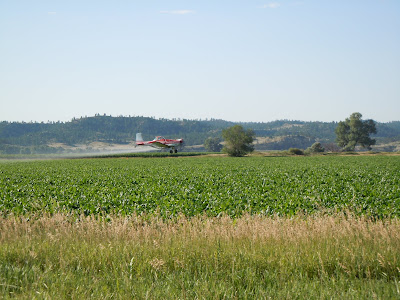 It was neat to watch the crop duster fly so low over the fields, and a little scary to be so near the chemicals.
Both of us love birds of prey, so we stopped to take some pictures of a couple of red tailed hawks that were circling above, making their loud piercing cries. They kept landing in trees right near the top of the cliffs we were following along the north side of the road. So majestic! 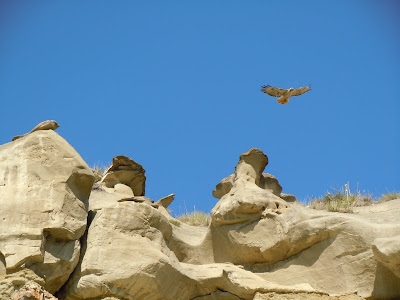 Jenny captured this great shot of one of the birds we were watching in awe. 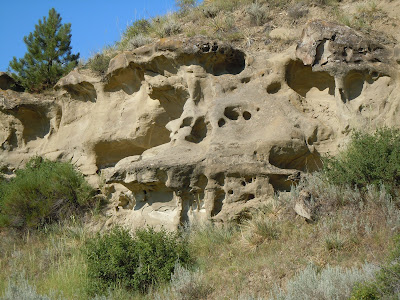 The cliffs were so cool to ride by!
Less than a mile later, we stopped again to take pictures of birds. This time, it was the swallows that make their mud nests under cliff overhangs. There were so many! It's amazing what sights you see when you don't take the expansive highways and stick to the little roads. We don't even have to go out of our way to see neat things and different scenery.

These birds were so much fun to watch.
A farmer that had gone by in the same direction in his pick-up earlier pulled to the side of the road and shut his truck off to talk to us. He was curious how far we had come and where we were headed. Unlike some people, he was so calm and easy to talk to; he was in no rush and not particularly excitable. The conversation only came to an end because someone else in a truck pulled up from the other direction. 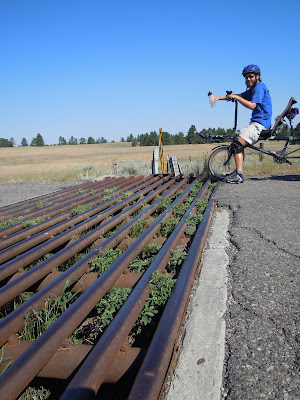 This is a cattle guard. They keep the cattle from wandering where they shouldn't. They take the place of a fence across roads. Kind of annoying to ride over, but not too bad.
Continuing on, we climbed our one hill of the morning. There were some small ups and downs, but this was the only hill. We stopped one more time to take pictures beneath a beautiful cliff with amazing rock formations. Then we finally made it through some more fields and down to the bridge across the river into Custer. 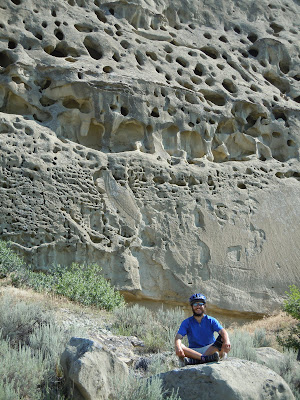 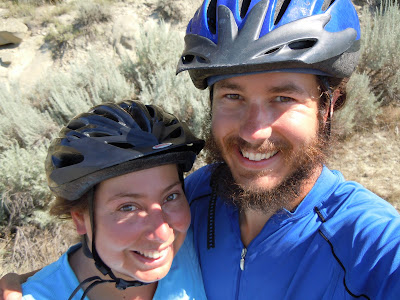 Two of the pictures beneath the cliffs.
There wasn't much open in Custer, but we did find a cafe still alive. The owner said he gets by with only a few customers during the day since he gets a fair number in for breakfast. He does all the cooking, cleaning and serving, but he manages to rustle up a tasty lunch for a reasonable price.

The cafe was a break from the intense heat that was now upon us, but we were back out in it soon enough, and it was still warming up. We stopped at the gas station in Custer for ice before heading back to the Frontage Road to head west. A few miles down the road, Jenny mentioned that she REALLY wished we could go swimming. Just then, we came upon a sign for a fishing access!

Hoping it would be a good place to swim, we excitedly turned toward the river on the gravel road. Not far along, we found the river. After talking with two of the people there, we made our way to a spot where no one was fishing, out of sight of everything except the river. We parked the bike in the shade of some trees, shed our socks and shoes, and walked down to the bank of the Yellowstone River. 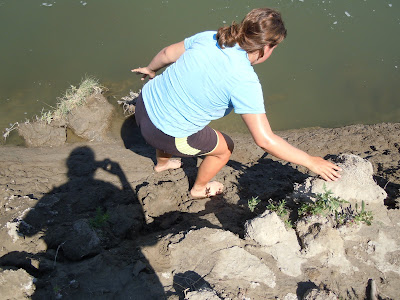 Yay!
Oh how delightful it was to swim around in the water! The cool, refreshing water was such a welcome break from our hot day. We were in the sun, but not burning up! Amazing! We played in the river for quite a while, making our way upstream on the back current, then jumping in the forceful downstream current. We found a few cool stones, lost them, and found a couple more. After almost an hour, we reluctantly climbed out and relished our wetness as we put our shoes and helmets back on for an afternoon of riding.

Looking for a break and maybe some food and water, we found the town of Pompey's Pillar to be only a bar so we headed back to Frontage Road and continued on. We found a tiny spot that looked like it could be camping, but it would have been really noisy wedged between train tracks and the road, with the highway not far off. So, we opted to check out what Pompey's Pillar was all about.

It turns out that Pompey's Pillar is pretty neat. Besides being a cool rock that sticks straight up in a very flat landscape, it's a national monument best known now as the only place left where you can see physical evidence of Lewis & Clark's exploratory expedition (1803-1806). We went into the air conditioned visitor center. We didn't feel like reading the exhibits, but were pleased to learn we could climb the Pillar for free since we came by bicycle. 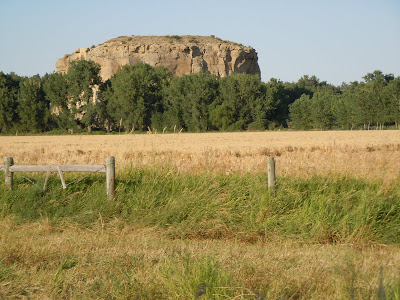 Pompey's Pillar.
Walking up stairs is not as easy when you've been biking all day, every day, but we climbed up to the signature, snapped a few pictures, and then climbed to the top. It's only about 200 feet high in total from the flat land below, but it offers quite a view since it's the only high thing on that side of the river for miles around. 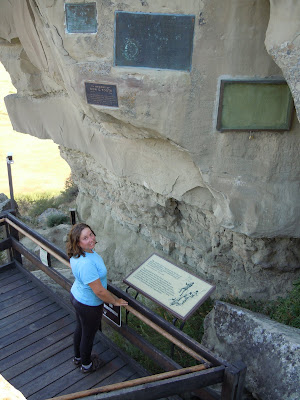 Lots of people have made their mark on this large sandstone formation over the years. 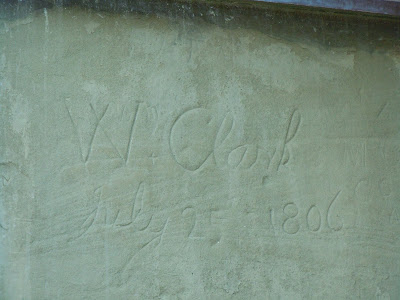 William Clark's signature from just over 204 years ago. 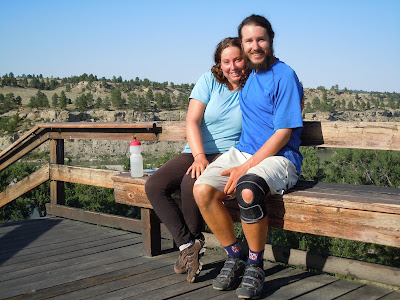 We were tired, but we made it all the way to the top!
Back at the bottom, Brett wasn't feeling well at all, but we had asked about camping in the area and were told there was a fishing access we could camp at less than a mile away. Brett rallied after a few more minutes in the air conditioning, and we pedaled up the road to Bundy Bridge Fishing Access.

It smelled a little funny, and there wasn't much flat ground for pitching the tent, but there was a vault toilet, and we managed to find a decent little spot. Unfortunately, the mosquitoes found us, and we headed inside as quickly as possible. We were tired and hungry, and not feeling great, but we had made our goal of starting early and ending early happen! It was only about 7:00, and we had covered 58 miles. We ate in the tent, and then fell asleep exhausted.
Posted by Jenny at Friday, July 30, 2010