We woke up to the sound of light rain falling on the tent. Once we got up, we moved ourselves and all of our gear into the shelter to eat some breakfast. Oatmeal, hard boiled eggs, avocado and chips made a delicious meal and we were ready to leave by 9:30. Nice cloudy skies surrounded us as we set out, a welcome change from the past few days of heat. 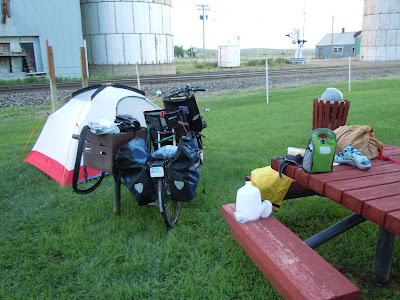 A rainy morning. After the heat, that was okay with us!
We were both feeling better than we had last night, having gotten some good rest, despite the very loud trains passing in the night. We woke up whenever they passed, of course, because they blew their whistle for the crossing and it seemed like they were headed right for our sleepy heads, but they always stayed on the tracks. As fun as trains are, we're tired of camping near them at night.

As we were setting out, Brett was worried about his knee. After days of good feeling there, yesterday it had given him pain. This morning, before we left it popped disconcertingly. After riding a little ways today, both knees felt much better, thankfully. By the time the knees felt better, we were leaving behind the few houses that we saw for the first ten miles or so. Then it was clear we really were on our own out in the middle of nowhere. 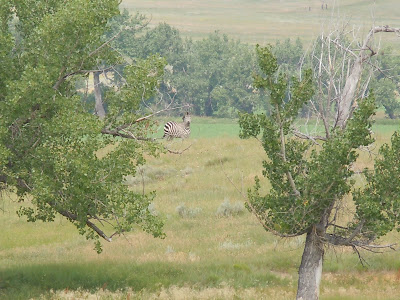 Okay, so that's not a horse, or a cow. Did you know they had zebras in Montana? Neither did we.

Turns out, “nowhere” is BEAUTIFUL! We took a lot of pictures today. There were lots of picturesque pastures, marked by barbed wire fences. Sometimes we'd see cows inside, but usually we were alone even from the cows.

The sun did come out, as much as we wished for it to stay hidden behind clouds all day. Today at least we did get some relief from scattered clouds. We kept rooting for the clouds to come rolling in and stay, but they always passed by after a little break. Blocking the sun must be hard work. 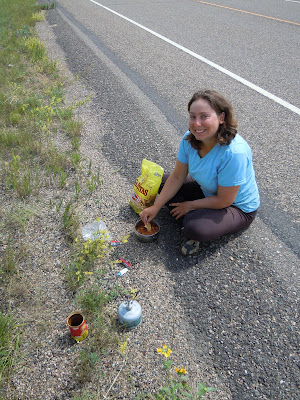 Lunch/snack of chips with beans and cheese. 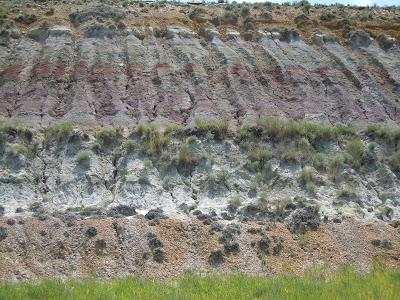 Look at all the different colors!
There were going to be hills. We knew that from looking at the elevations on line ahead of time, two nights ago at the motel. They weren't as bad as we feared, being mostly rolling hills. There were some nice descents, and of course a few decent hills, too. On the hills and other times, too, we did a lot of singing. We've probably mentioned it a bunch already, but we really enjoy singing together. Maybe we'll carry this habit home with us, and do it more than we used to. 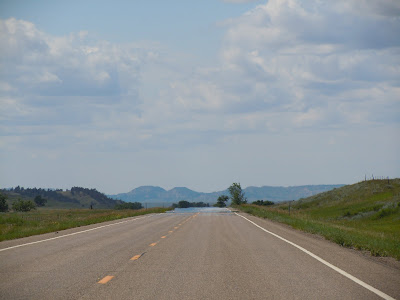 They don't call it Big Sky Country for nothing. 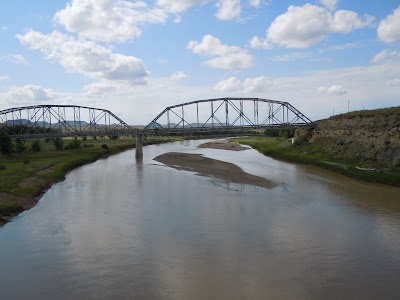 The Powder River.
Around mile 40 or 45, the bigger hills started. They were long suckers, and fairly steep, but we climbed them fast enough. And of course it would figure that the sun would out and really pour on the heat just as we were climbing the big hills. We started taking more frequent breaks, both just for breathers, but also for food (a carrot, peanut butter and jelly sandwiches, chocolate). 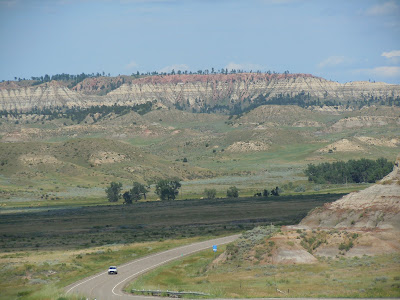 Climbing up and looking back. Amazing layers! 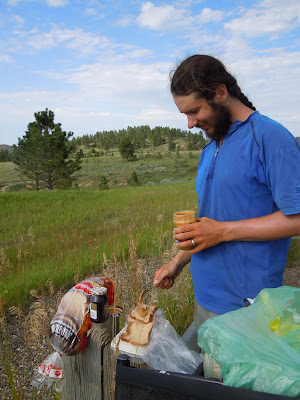 Brett with peanut butter and jelly. 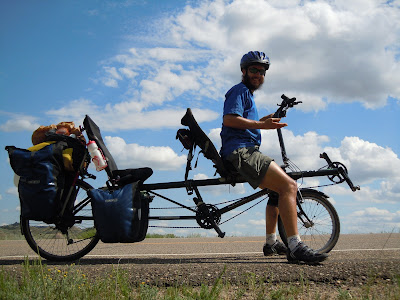 During a break in the middle of a long climb up a hill, Jenny found some shiny rocks on the sandy cliffs near the road. She brought them back for Brett to hold.
Also from looking at the elevations on line beforehand, we knew there was a big downhill awaiting us at the end of the wilderness, so we had that to look forward to all day, and it kept us going. We did one last big climb, and then suddenly felt ourselves headed down. It was two miles before we caught our breath from the awesome steep downhill, but it was another two miles of mild downhill before the ride was over! 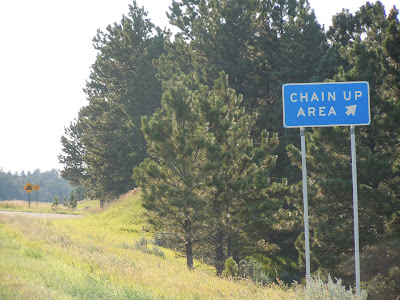 The signs of a downhill to come.
At the bottom of the mountain, leaning the bike against the Junction 94 sign, we took a short break. Hundreds of grasshoppers jumped away as we stepped into the short grass alongside the road. There are LOTS of grasshoppers around here. Sometimes they jump onto us from the side of the road while we're biking. It's startling.

Less than a mile past the overpass for 94, we found a private campground and decided that we were ready to be done for the night. Big Sky Campground had laundry facilities, showers , Internet, and nice grassy spots for our tent. After we got settled in and cooked up some dinner, we took turns taking showers and switching the laundry, while the other did some writing inside on a couch away form the mosquitoes. The owners of the park even gave us some chicken for a second dinner while we were inside the lounge area! 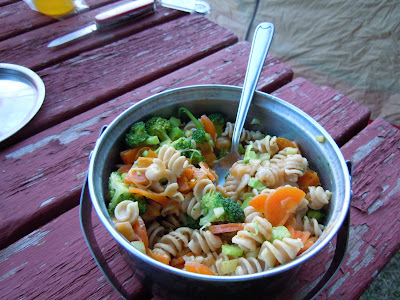