We didn't start riding at the crack of dawn like we thought we might. We didn't even wake up at the crack of dawn. We had the window open when we fell asleep last night and the train whistles kept us awake until we realized in the middle of the night that we could close the window to make the noise stop. We slept better after that. When we did wake up around 9:00, it was raining HARD. We checked the weather and saw that it was a pretty big storm. Figuring we'd be better off waiting for it to pass, we set about posting a blog entry and packing up together.

We left the motel, headed for Subway to get some sandwiches. We also picked up four chocolate bar treats at the gas station in the same building. We didn't feel like eating our sandwiches right there, so we pedaled north on Route 10 a ways, until we felt really hungry. A guardrail was all that we had to sit on, but at least we could lean the bike on it. The sandwiches were really good. 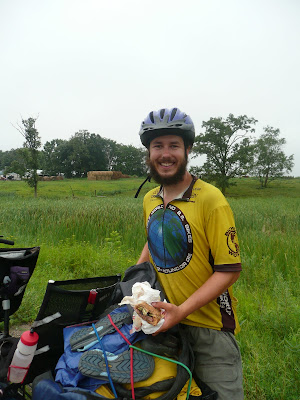 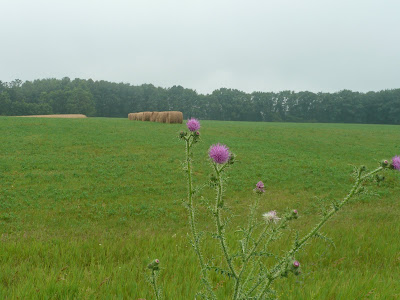 Jenny the photographer at work (or is it play?).
The weather was still overcast, and there was a little bit of light rain as we rode. We were making our own route to Parkers Prairie, and it was designed to be the most direct, so at times we got a little confused following the small roads and making more turns than usual. We turned off of Route 10 onto 18 heading west and followed that until we found a dirt road that we thought was the one we wanted. We used the compass quite a bit today to make sure we were headed in the direction we hoped we were going. It was slow going on the dirt road and then the storm clouds that had been looming all afternoon finally decided to let loose. We kept biking through the light rain, thinking we might be able to outrun the storm, but when it started pouring we took shelter under some trees. 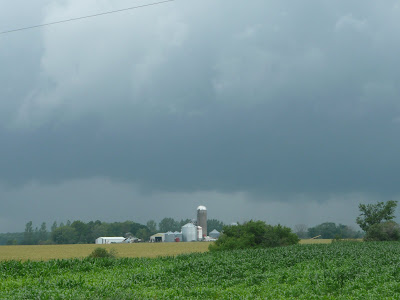 The storm clouds that we were riding into. 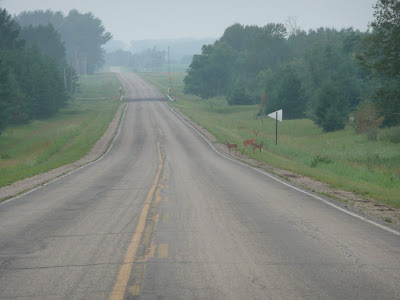 Cute deer.
Taking so many back roads might not have been the best idea, in retrospect. We were running low on water and there were deer flies following for us most of the day. We could never seem to shake them. Also, we didn't have much food to eat. We knew we were going to stay with Selena and her parents, so we didn't buy extra food for the day. We ended up eating three out of four chocolate treats. Mostly, the dirt roads and confusing directions slowed us down a lot. Some of the small dirt roads were actually sandy, and after the rain they were really soft. We actually walked the bike past one particularly boggy section. 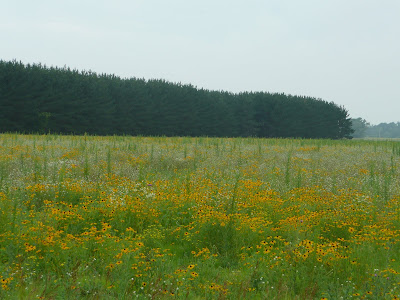 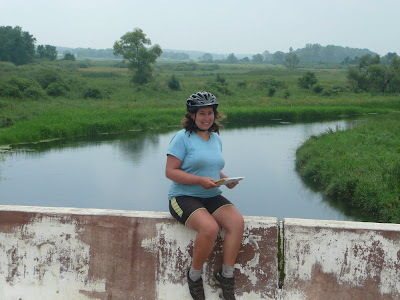 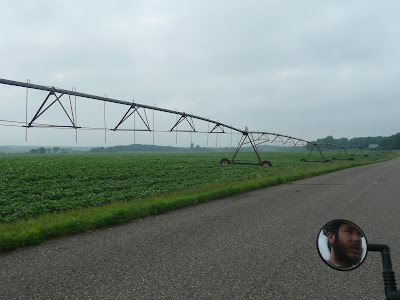 A few views from our crazy day.
The sun came out and heated us up quickly. Then, our water ran out a few miles shy of Otter Tail County Road 42, the road Selena's folks live on. We knew we were close, so it didn't bother us much. Unfortunately, our tired, hot, addled brains dismissed the signs we were seeing for the plant nursery that Selena's family runs. We knew we were close, but the directions we had from Google Maps ended up being incorrect. When we got to County Road 42 we turned south instead of the way we should have gone: north. Selena's parents live less than a mile up the road! 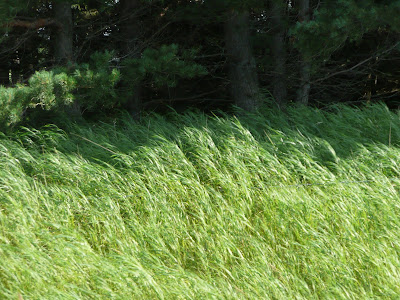 There were strong winds against us after the storm passed.
After we had gone a good 5 miles in the wrong direction, we started to get nervous we had passed the house and not realized it. We stopped and Jenny called Selena. Not realizing which way we were headed, and figuring we were coming from the other direction, Selena reassured us that we hadn't passed the house and that it was only about another 3 miles. Excited and relieved, we kept biking. By the time we hit the town of Parkers Prairie, we knew something was wrong. We called Selena again and figured out what had happened. After we had called the first time, she had hopped on her mom's bike and pedaled the 3 miles out to meet us, but of course, we never showed up!

We didn't have to ride all the way back out the almost eight miles, though. While we were looking for some water, a man in a big red pick-up truck pulled alongside. It was Lowell, Selena's dad! “You're going the wrong direction!” he yelled from the truck. We all pulled over, Lowell handed out some water he had, and we piled the bike and ourselves into the truck. It wasn't the triumphant entrance we were looking for at all, but the time had passed for that. We were really sad not to get good pictures of arriving, but sometimes things don't work out the way you hope. We were still really excited to have made it all the way to Selena's parents' house on our bicycle! 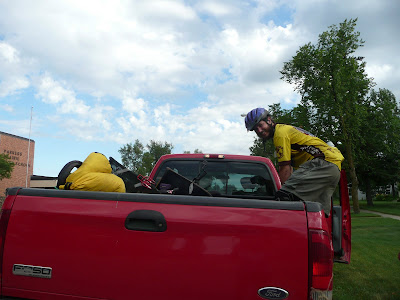 Thanks for picking us up, Lowell! 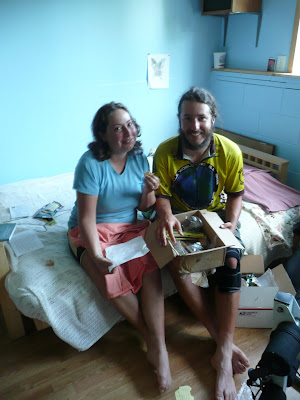 Jenny eats a cookie from Kathy, Brett's mom. The packages from our parents were nearly the same in many ways. Both had yummy treats, both had sweet notes, both had useful items that will come in handy, and both were the same size! We feel so lucky to have such loving and supportive parents. 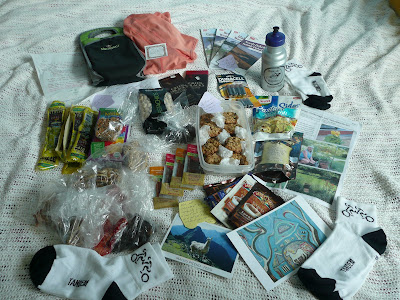 All of the great things that came in the thoughtful packages!
While we got settled in and opened up our two WONDERFUL packages from our parents, and looked at the postcard Brent and Abby sent, Selena cooked a delicious meal, complete with wild blueberry pie for dessert. It was so nice to be in a place that felt like home, and to be around our dear friend Selena and her parents. 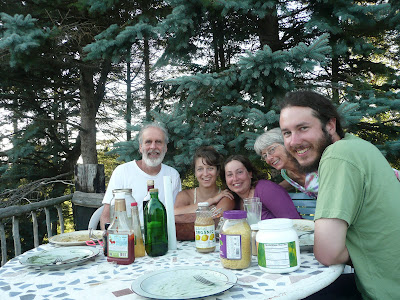 Lowell, Selena, Jenny, Audrey, and Brett. Dinner was so good, the plates look clean!
Posted by Jenny at Wednesday, July 14, 2010