The birds we saw last night were still there when we woke up this morning! Brett saw them first when he peeked out of the tent in the morning. It's easy to get up when there are cool birds outside to look at! Quickly and quietly we dressed, and with camera in hand, walked down to to the water to take a better look. Brett thought they were possibly whooping cranes, and Jenny guessed they were some kind of pelican or weird-looking swans. We watched them swim around for a while and then they took flight. 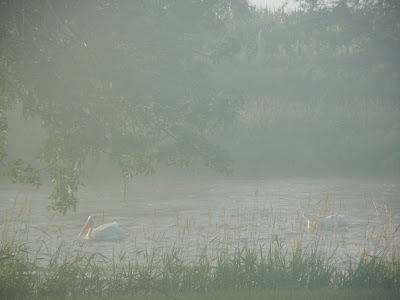 Our first view of the big white birds in the morning! 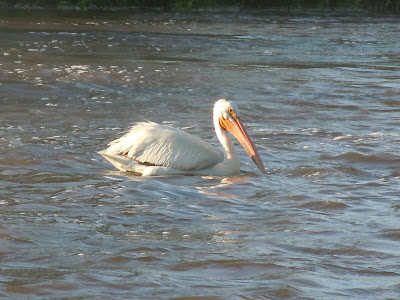 We found out later that these birds are white pelicans. 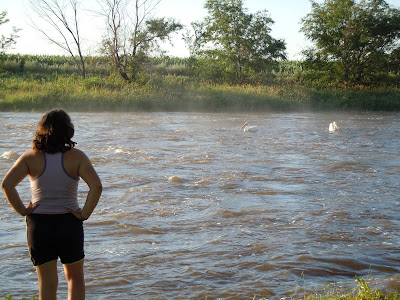 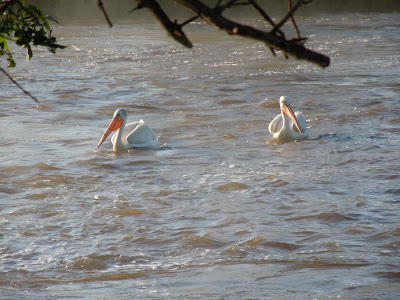 What an inspiration to wake up next to such unexpected wildlife.

We left soon after the birds did, but instead of getting an early jump on the miles, we headed back to the alluring Internet at the gas station on the east side of town. On the way, we went through the town streets instead of the highway, and we found the grocery store. After some food shopping, we got down to the fun of updating the blog.

The Internet held us for quite a while, but we got a bunch done, including taking care of a few things back home that we'd been meaning to do for a while. We didn't leave until almost 11:00, so it probably isn't a big surprise that we were kind of slow today. The wind was once again against us, plus it seemed to be uphill most of the way. (Looking at the elevation later, this is confirmed by the gain of almost 700 vertical feet.)

Our first town of note today was Edgley, but it's mostly a big intersection of two highways and a gas station with a large store in it. We hooked on to the wireless signal, and made a few phone calls, too. The best part, though, was near the end when a group of about eight old farmers came trickling in. Jenny overheard them talking about their respective watermelon plants. One man's plants were small and not doing well and the other man was giving him a hard time about it, in the cutest of ways. They all started up a game of cards just before we headed on to do some more pedaling. It was really neat to see community come together, even if it was at the tables in the gas station. 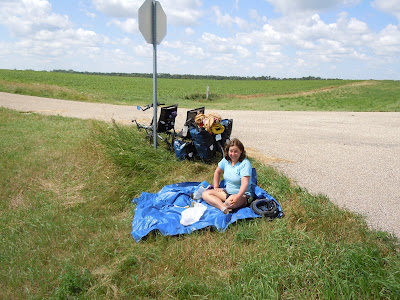 With no shade in sight, we took a break and had a picnic lunch on our tarp.
It was hot and we getting grumpy. The riding was fine, but the direct sun wasn't so fun. When we saw there was some shade at the end of a line of trees along the roadside, we took our chance to chill out in the shade. When we were ready to leave after a long rest, we felt a bit better, but still just not in the mood to bike. It didn't help that six miles down the road, when we took our next break, Brett realized that his phone must have fallen out of his shirt pocket back at our last resting spot!

Making the decision to go back to get it wasn't hard, just depressing. We were just hoping we would find it once we got there, so that at least the backtracking wouldn't be in vain. Also, heading back east for six miles was a lot quicker then what we had just done to get where we were. Boy, does the wind help! About halfway back Jenny jokingly suggested, “Lets just keep going this way!”

After a very long search in the grass where we lay down to rest before, the phone was found by Brett. Relieved, we turned the bike around and headed back west on the very familiar road. The only difference was that this time, we were biking directly into the rain. While we were looking for the phone, a bunch of huge dark clouds caught up with us. 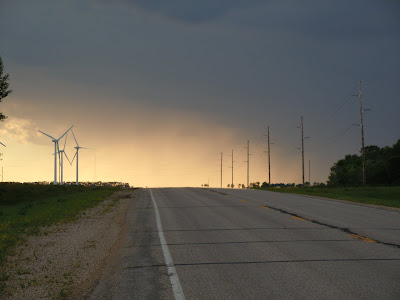 The sky we were headed into. We weren't sure if we should seek cover or not.
The storm wasn't too bad. There was a lot of wind and quite a bit of rain, and very dark clouds all around us, but we were biking through it quickly. When the storm started to dissipate, everything was beautiful! The sun was starting to go down and the world was a mix of misty pastel colored clouds and a huge rainbow that spanned across the whole sky. 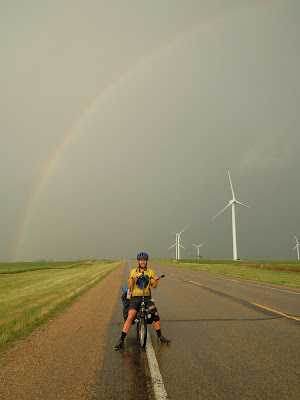 The amazing sky behind Brett and the wind turbines.
When we neared the town of Kulm, we spotted a sign for camping. It took us a minute to decide that we really were ready to stop, and that it really was a good idea to take the mile detour into the center of the small town to check out the camping situation. Sometimes we are so tempted to push on once it gets cooler at the end of the day. Unfortunately, with the coolness of the evening, comes the darkness, which is not ideal to bike in. 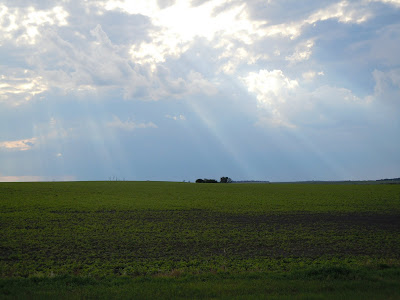 After the storm passed, it turned back into a bright sunny day with that "clean" look.
The campground in Kulm turned out to be in a town park. They had electric hookups, but no bathrooms that we saw. There were nice grassy spots and Brett set up the tent while Jenny battled the mosquitoes and cooked a mix of hot dogs, pasta, broccoli, and pepper jack cheese for dinner.

In the tent after dinner, we took some time to check in with ourselves about the day and to relax. Brett's knees hardly hurt him at all today, so that was good. We were mostly damp from the rain, but also tired from the sun, the biking, and being grumpy. Being in a bad mood takes more energy than you think. We agreed it was a better plan to be happy.
Posted by Jenny at Tuesday, July 20, 2010