What a beautiful day to wake up to! It was sunny but the temperatures were cool, a rare combination on this trip. After packing up, we backtracked the little way back to Old 27. We stopped briefly at a Subway shop to buy more sandwiches, because they worked out so well the day before. Three miles into our ride today, we broke 1000 miles!! It was very exciting. 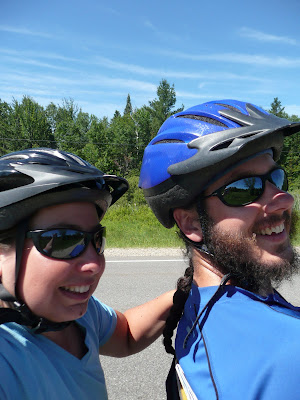 Here we are, just after pedaling our 1000th mile of the trip!
While we were on the bike we were cruising. We took lots of breaks, though, which both kept us in good spirits and able to bike quickly. When we got to Roscommon, we stopped to ask about maps at the township hall. They only had a free map of Roscommon County, which we were only a few miles away from exiting. The ladies were very nice, though, and gave excellent directions. Plus, while we were outside on the grass eating our sandwiches, one of them brought out copies of maps for the next section of our trip! 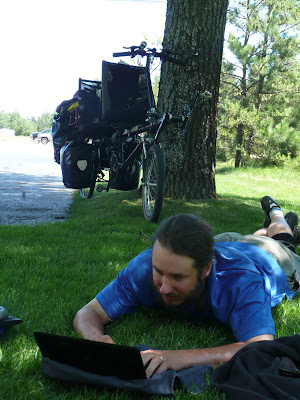 Brett writes for the blog (or just checks his email).
It did get pretty hot later in the day. We kept stopping at places, looking for shade and Internet and good places to sit and write the blog. When it's so hot in the middle of the day, it's much better to stop for a few hours and take a break, if we can find a place. In some shade outside a grocery store, Jenny talked to her sister on the phone, and lots of people talked to us about our trip. One man took our picture and said he would write an article about us in the paper he works for. An older woman swore when she heard we were biking all the way to California. “HOLY S**T!” were her exact words. It was unexpected, but cute.

After all that, we had a pretty long stretch in the woods on smaller roads. Almost all the traffic we saw had some sort of outdoor gear: an RV or trailer, fishing poles in the backseat, jet skis, boats, you name it! Soon we found ourselves back on a bigger road, flying down a long hill into the town of Grayling. We were hoping for the magical combo: Internet, good cheap food, electricity, and good place to sit at the laptop together in the shade.

We found the magical combo at Wimpy's, a fabulous diner just outside town. The staff were all really friendly, too! They even took our picture for us. We stayed there for quite a while, eating our ice creams and then later a hot dog. By the time we left, it was cooler and getting on into the evening. 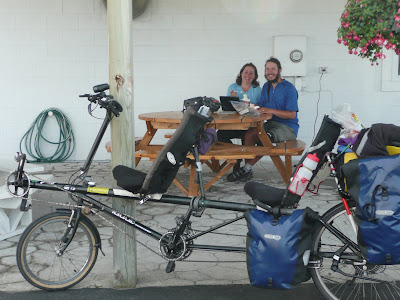 Thanks to the great staff at Wimpy's for this picture of us!
After our break and our ice cream, we took the bike path out of town all the way to Hartwick Pines State Park. It was mostly flat most of the way and then at the end down hill to the entrance. We were going very fast the whole way there without a huge amount of effort. We entered the park, checked in, and then proceeded to go downhill in the dusk/dark to our campsite. All the way down, and for some while afterward, we were dreading the climb back up in the morning. 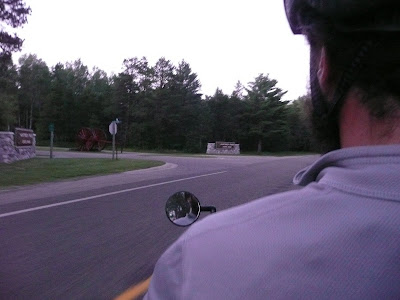 Brett steers us into the park at high speed!
The park was nice enough, but the temperature had dropped sharply, and we were shivering as we got into bed for the night. We had trouble getting to sleep because of the cold and tossed and turned for a while trying to get warm. Because we were awake we heard a hoot owl in the night. At first the sounds were far away and then right overhead! Maybe the campsite we chose is this hoot owl's favorite night time roosting spot?
Posted by Jenny at Thursday, July 01, 2010