Waking up this morning was not as fun as usual. We were stiff and not feeling so great, but we got ourselves up and out of the tent, and by the time we did that we felt a bit better. Still, after yesterday's push to get to Minnesota (yay!), we didn't have high expectations for ourselves today. We figured we would just take it easy and see how many miles we end up doing.

Jenny made a breakfast of granola, rice milk, and cherries while Brett fixed the points on the Google map for the trip. After breakfast, we switched and Jenny uploaded lots of pictures and worked on writing while Brett packed up some and went to go pay in the office of the campground. Brett came back from the office with word of another nice campground in Isle, about 50 miles away, but right on the route we were planning to take. Once again we traded off the computer and Brett wrote more while Jenny took down and packed the tent. We think we make a great team.

On our way at last, we got to cruise down the big hill we climbed to get to the campground the previous evening, and then climb a slightly bigger hill once we got back on the highway. Halfway up the hill, though, we took a break by the “Welcome to Minnesota” sign. We took some fun pictures, and then proceeded on our way, munching the last of the good beef jerky from Fifield, WI. 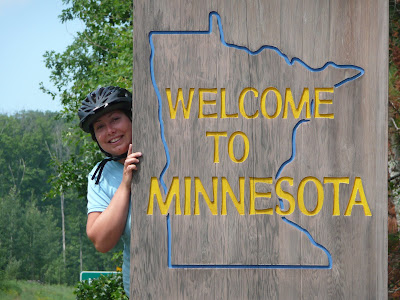 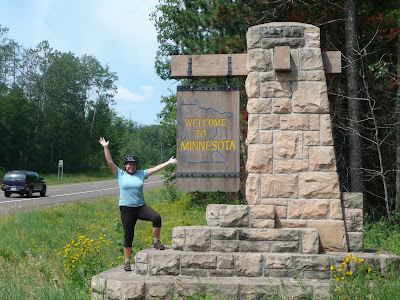 Yay! We made it to Minnesota! We can't wait to see Selena!
Although some of them were different, the wildflowers continued to be beautiful along the sides of the road, just like in Wisconsin. It really brightens our outlook on things to have pretty flowers to look at along the way. We never get tired of them, even the same ones over and over. 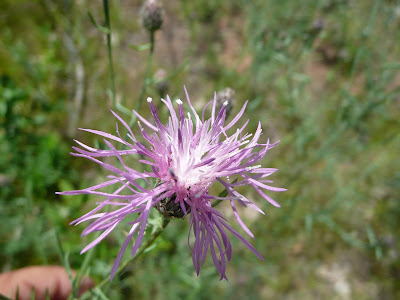 Pretty thistle flowers dot the sides of the roads. 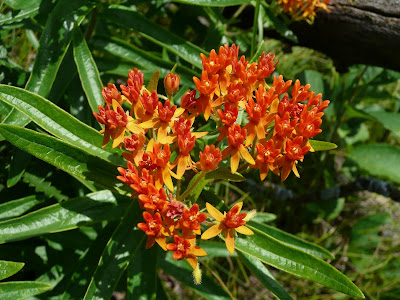 For a few days we've been meaning to capture an image of this orange flower that grows along the road. It looks familiar, but strange at the same time. Anyone know what it is?

We had been warned about some hills, but it was really just that first big hill and the rest of the terrain was small rolling hills. We rolled into Cloverdale, which is really just Tank's Tavern, and stopped for a meal. We were amazed at the quality of the food. We had by far the best bacon cheeseburgers of the trip! So good!

When we left, the sun finally convinced us to put sunscreen on, and we did that in a little park across the street from Tank's Tavern. Then, although we weren't feeling like riding much, we continued west. There were some more rolling hills, and then after much groaning, we finally made it to Hinkley.

There is a casino in Hinkley, and a big highway going north/south, so there were lots of fast food restaurants and motels and such. We really wanted to find some shade and an Internet signal, but finding one that was strong enough was difficult. We finally found one that worked well behind a burger joint. They had a few trees and picnic tables in a grassy area, so we set up for a while there. We worked together on the blog, and then Jenny did even more while Brett called his mom and had a really nice conversation. 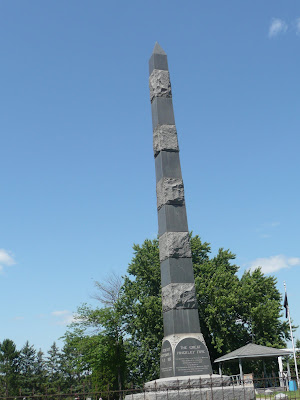 The town of Hinkley burned down at some point, and this statue marks that historic event. 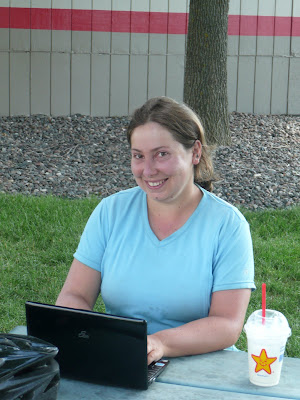 Jenny works on the blog. Brett broke down and bought a shake/malt from the fast food place. It was pretty good, but not like the real ones.
Getting up and going can be hard after a nice break, but riding is almost always good for us. After crossing over the big highway, we found a cute little downtown to Hinkley. We also found the grocery store, and we decided we had better get some more food for meals later. Our shopping basket ended up holding salami, cheese, a can of olives, a can of black beans, a jar of peanut butter, a small jar of pasta sauce, a small juice for immediate consumption, and a big container of juice for later (delicious mango/peach/apple).

Leaving Hinkley behind, we started moving along faster than before. By this time it was evening, though not nearly dusky yet, and we enjoyed the faster pace, raising our average speed to 10 after hanging around 9 or 9.5 most of the earlier part of the day. We were following County Road 18 and then County Road 3. Then we turned north.

After a while, Brett's knees were getting really tired. In fact WE were really tired, and so we stopped for much-needed snacks by the side of the road. We put down our tarp, and ate enough to feel better. Sometimes it's hard to tell when you just need some good food and when you should push a little further on. We were surprised at how hungry we were, so we were really glad we stopped. Things were a little better after that. 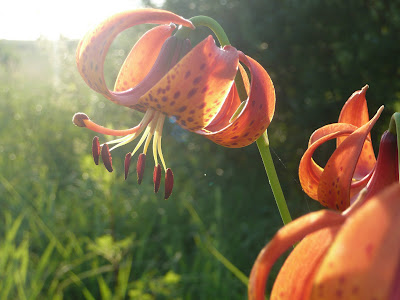 Another pretty flower along the roadsides that we love to see. The wildflowers really are one of our favorite parts of this whole trip. 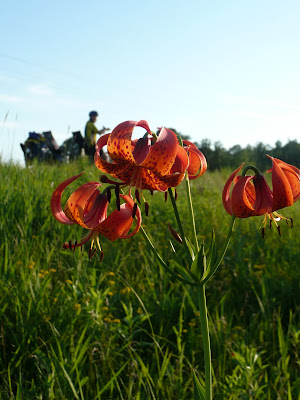 A nice shot of the lily, with Brett in the background.
We turned west again on Route 27, and now it was dusky. We turned our flashing rear light on, and continued on. It got dark while we were still on Route 27, and we decided that although we had hoped to make it to the public campground at the state park a little further west, we should just stop at the first campground we got to, even if it was more expensive. 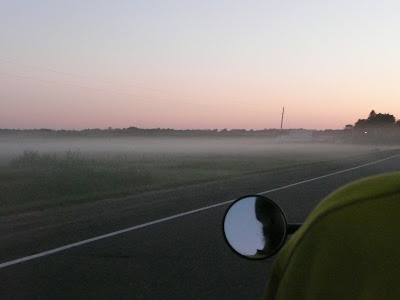 Biking in the evening gives you some amazing views that you wouldn't see in the day. This mist was really fun to bike through.

South Isle Family Campground was the first one we saw, and it was also the one we had been told about at the previous campground. We pulled in about 10:00, and some dogs started to bark at us without stopping. We felt badly, and tried to look for the late registration directions. They just said to go up to the house. We didn't want to disturb anyone, but before we could even get to the house, someone came out and welcomed us.

The proprietor, Wally, was super nice. He was really supportive of our trip, but also generous. He didn't charge us full price and gave us half a bag of ice for free. Thanks so much, Wally! We set up camp in the first site we came to, then Brett iced his knees for a bit. We took a shower and brushed our teeth before we checked the blog for comments. We found a few and that made us really happy. We went to bed tired but satisfied.
Posted by Jenny at Monday, July 12, 2010