Today we woke up about 6:30, Mountain Time! Jenny got Brett up, but we didn't rush the packing. We had come in after dark the night before, so there were plenty of things to be sorted out. Jessie and Clifton stopped by, having been up all night moving trailers. We thanked them again, and they wished us well. On their advice, we headed to the cafe in town.

We found a booth with plugs to charge our camera and computer, and ordered some food. The waitress was really nice, and so was the cook, Patrick. Afterward, Patrick came outside with us to check out our bike and talk to us. You know how some people are just easy to be around? He was like that, and really great to talk with. We all agreed that more people should travel, and he noted that the hardest part is the first step. He told Jenny that we have good auras. “I wish I were going with you,” he said, and then: “When you get to the ocean, tell it 'hi' for me.” We really took that to heart and can't wait to greet Pacific for Patrick.

We left the little town of McIntosh, SD then, but it was hard riding, with the wind hard across our bow. We were a bit cold, too, and Brett's ears were uncomfortable from the chilly wind. It was a struggle, and the sky was grey at first, so we thought it might rain on us, too, but we made it to the next tiny town. We found an inn where we used the restrooms and filled up our water bottles with some pretty yucky-tasting water, but also stayed a little while and used their electricity and Internet. 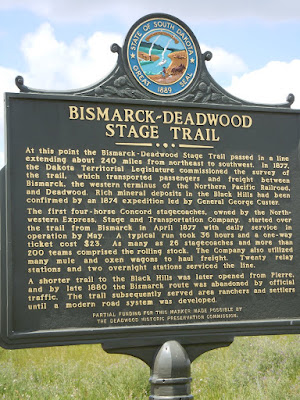 Some more of the interesting history of the area. Not sure if you can read it all, but it's amazing to think of all the resources that went into running a stagecoach for passengers over long distances. 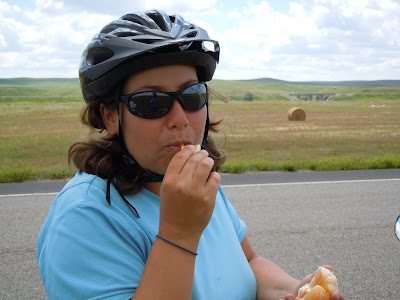 We were simply playing the word association game, when suddenly one of us said "Orange!" Immediately we remembered that we had an orange to eat in the food bag and we stopped right there for a much needed snack.
Riding was a bit easier after our stop, and it wasn't cold anymore because the sun was shining! We passed several more tiny towns, and it seems there isn't much to really say about them. There isn't much in the way of businesses out here, and often storefronts that had businesses are just closed up or for sale. 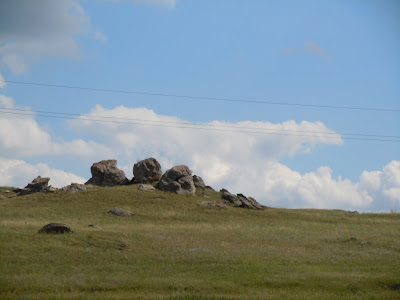 Some more of the interesting terrain (aka poky hills). 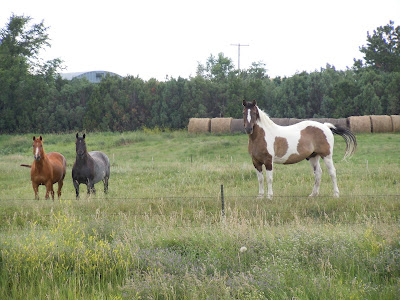 Such pretty horses! These three were some of the finest we've seen.
Some more riding brought us to our basic goal for the day: Lemmon, SD. In Lemmon, we planned to buy some groceries, and buy we did! Bread, avocado, ham, muenster cheese, juice, powerade, cherries, bananas, an orange, M&M's, brownies, and broccoli all got snatched up. We were very hungry, so we walked across the street and sat in the shade at a table in front of the Petrified Wood Museum. We feasted on the brownie treat, the ham and muenster cheese with avocado in sandwiches, and cherries. 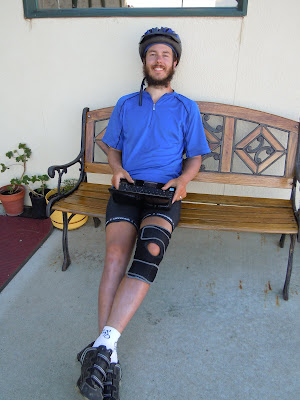 On the outskirts of Lemmon, we found free wireless outside a motel. 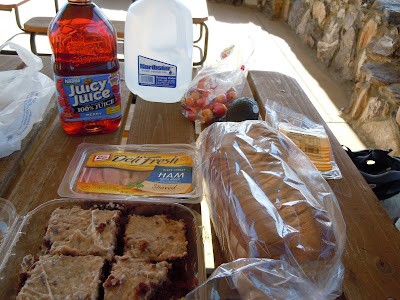 Those brownies (with coconut frosting) didn't make it out of Lemmon!
After we were fed, all felt right with the world. We spent some time drying out our wet clothes and the tent fly while we were eating and when things were mostly dry, we took a walk through the Petrified Wood area. The Museum was closed for the day, but it was fun to just see all the petrified wood that they had in the park.
After we had walked through the park and taken some pictures it was getting on to 5:00 and we were torn whether to push on to the next town, or just try to find a place to camp for the night where we were. There was a park in town, but it didn't look like people were supposed to camp there. After deciding to go on to the next town, then seeing a sign for camping right as we got back to the main road, we turned back and went to check it out. It turned out to not look that great, mostly a place for Rvs (and probably sans bathrooms), so we turned around again and this time headed out of town for good. 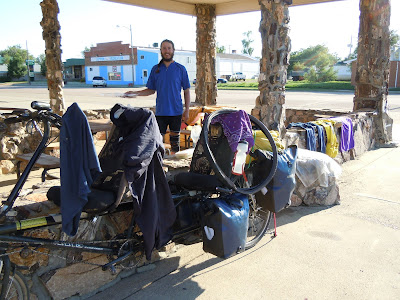 We spread our stuff out and the sun did the rest. 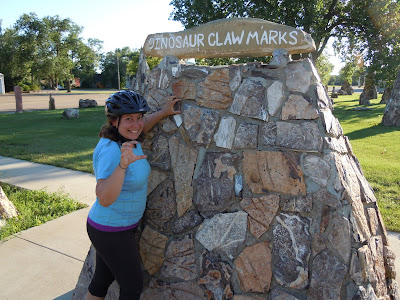 Dinosaur claw marks, eh? Did a Jennyasaurus make any of them? 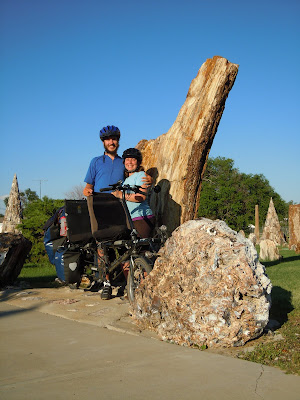 Standing next to our favorite piece of petrified wood in the whole park.
There was a large hill just out of town and we started to second guess our decision to push on as we pedaled up it. Some songs and a little effort got us up, and after that, it turned out to be beautiful riding! It wasn't so hot as the sun started to go down and it felt good to be biking. 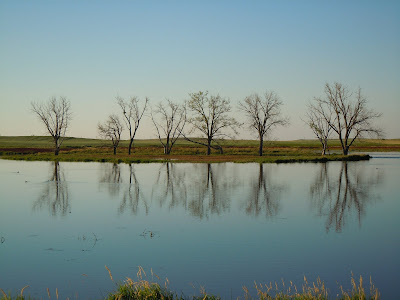 Jenny gets some really fabulous shots, like this one just a little past Lemmon.
We witnessed a beautiful sunset as we neared the state line into North Dakota! Sometimes biking at night is our favorite part of a day's ride. Things look so different in the evening. The sky has different colors. When it starts to get really dark, like it did soon after we crossed the border, our views get even more different. 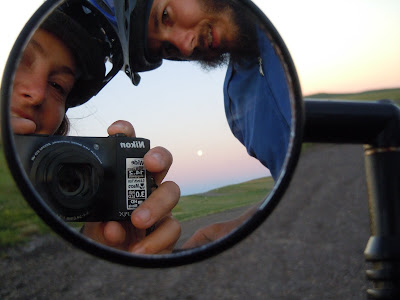 A view of Jenny, our new camera, the moon, and Brett, all in the mirror. 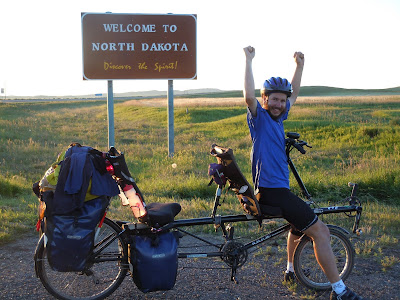 We made it back into North Dakota!
The lights from the town of Hettinger, ND were visible to us from seven miles away. Those last few miles seemed to creep by so slowly with the lights in the distance. It's hard to gauge how far away things are or how steep the hills are when it's dark. We felt like we were going about the speed of molasses.

Finally pulling into town, we stopped at the first place we saw, a motel, to ask about camping and stores in the area. They were closed for the night, and we didn't want to bother anyone by ringing the bell just to ask a question, so we went on. We found a gas station next and they told us there was camping at the park right over the train tracks less than a mile away! Yay!

When we got to the tracks, a train was crossing! We had wondered when we would get a chance to wait at a crossing because of a train. Excitedly, after the train had passed, we crossed the tracks and found the park. A baseball game was just ending in the field right near the campsites, so we even had light to see where we were going, pick a nice flat spot for the tent, and to orient ourselves before they shut them off just as we started to set up the tent.

After taking a shower and plugging in our electronics, we listened to some music before turning in. Around midnight Jenny's dreams were rudely interrupted by what we would later call, “the sick train”. At first we had no clue what it was. It sounded like some kind of steady machinery, but every little while—and this was the part that really twined itself into Jenny's dreams—there would also be a loud “CHHHHooooo!” To Jenny who was just trying to peacefully sleep, it was loud like an air horn at short range. It was very loud and startling. If there were letters larger than capitals, we would use them to describe the sound. She woke Brett up because she was having a tough time dealing with the sound. It took us both quite a while to figure out what it was, but when we finally determined that it was a train engine stopped in the train yard by the grain elevators it helped a little. Brett was very helpful in calming Jenny down, and we joked that the train was dying (from its cold, of which the “sneezes” were a symptom) and worse off than we were. Eventually it did stop (die) for the night, but it had robbed Jenny of some much needed rest.
Posted by Jenny at Saturday, July 24, 2010