With the sounds and the rain, we didn't get a whole lot of sleep last night. We were up early, though we were tired and packing was slow. In retrospect, if we could have slept more, it would have been a good idea. Both of us were pretty grouchy and we didn't end up leaving the fairgrounds until close to 11:00. Not the early start we were hoping for. 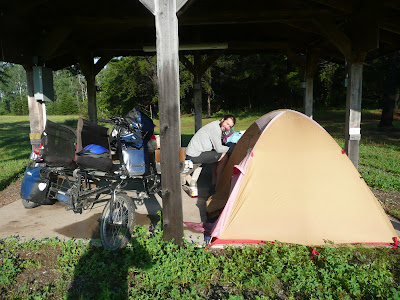 Our set-up under the little pavilion.
We did do some good things this morning, though. Right away, we split the other pasty, which was also really good. Some time was spent cleaning the bike and programing the new bike computer! We were VERY excited to have a new computer and hope that it lasts a while this time. Also, before we left, a lady who is in charge of things around the fairgrounds drove over to say hello to us. She was so friendly and glad that we camped there for the night! What a nice surprise after we were feeling so worried last night. She also mentioned that the campground we were looking for last night does exist, it's just not right on the highway and we would have had to know what small road it was on. Things worked out okay, though. 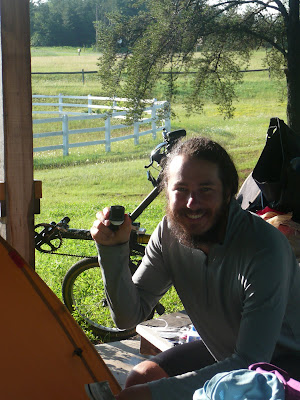 Hopes are high for the new bike computer!
For our second breakfast, we decided to stop at a cafe which was only half a mile back in the center of Florence, which was on our way anyway. We were able to charge our computer and phones, get good water for the road and a yummy brunch, complete with delicious coconut cream pie! 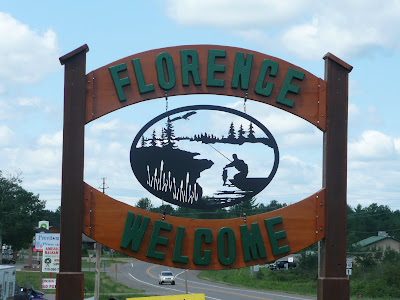 A neat sign. Not our Florence, though.
It was a little hard for us to get motivated to ride after brunch, because it was so late, now 11:45, and we had only gone a half mile so far. We tried to get a free wireless signal for a while, but didn't find one. Since we were not much in the mood for biking, stopping at the information center just out of town was what we decided to do next. They had some good maps and Jenny borrowed a highlighter and looked over the map while Brett wrote some on the computer. 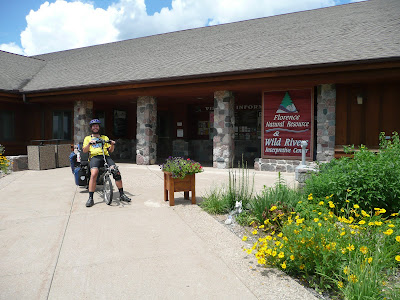 Brett looks ready to go after another long break, this one in the nice cool information center.
Finally, now afternoon, we started some real riding for the day. We turned off of Route 2, leaving it behind for good and saying 'hello' to Route 70. It was very hot and we still weren't loving the biking. Also, our bike computer seemed to stop working. We had attached the display unit on Brett's handlebars so he could see it more easily, but now that distance from the wheel was too far. Improvising on the go, Brett tried sitting on it, and that seemed to work, but half a mile later he realized it had slipped out and fallen away. We groaned mightily, but turned around to look for it. About ¾ of a mile back we found it, unharmed, on the side of the road. We spent a few minutes rigging it up in the spot where we had our old computer display unit, closer to the wheel, but this one has to be sideways. Oh well, at least it seemed to be working again.

On Route 70 we hit some of our first big hills since NY! It was exciting and a little hard at the same time to be biking up hills again. Going down was a lot of fun, especially after the hot climbs. We both have missed the downhills. We also loved the scenery today. There were so many wild flowers on the sides of the road. We both agreed that, so far, Wisconsin is our favorite state that we've been through on the bike. To combat the oppressive heat, we stopped to refill water bottles at a bar. Having ice cold water to drink makes such a difference. 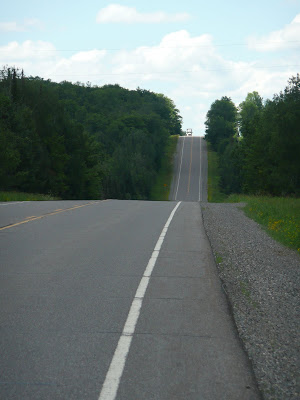 Up and down, up and down! Hills can be fun! 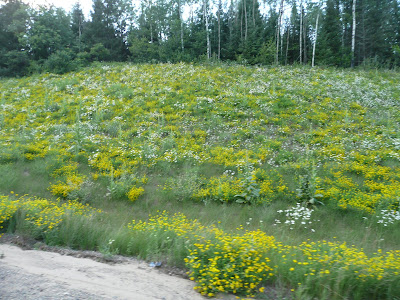 The roadsides along Route 70 are just covered in wildflowers!
A little while after we got on route 70 a lady in a truck going the other direction stopped and said, “Just to let you know, there are a couple of bears up there around the next bend. Good luck!” We thanked her for the warning, Jenny took out the camera and we pedaled on. There was a quick review of bear protocol, as we quietly held our breaths and carefully scanned the sides of the road. We wanted to see a bear so much. We looked and looked. It's never clear when drivers say things like, “It's just around the next bend," whether it will really be what they say. It almost always ends up being further, so we kept looking. We never did see the bears. They must have gone off into the woods by the time we got to the place the lady was talking about. Maybe next time. 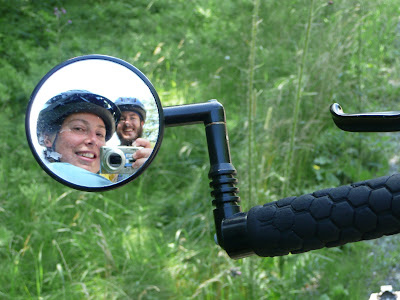 A fun photo off the mirror while stopped for a break. Sometimes fun photos help boost our spirits, too, making it easier to pedal on.
When it was getting on towards dinner time, we found a spot to stop and cook some beans, cheese, carrot and onion. We ate chips and beans while swatting mosquitoes. It wasn't the most relaxing meal, but it did put some food in our bellies. We left when Jenny found a wood tick on her leg. 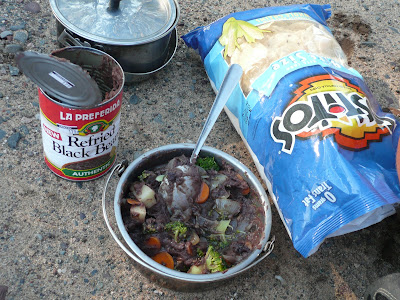 Dinner was better than it looks, and it was fun to have something different.
Now tired and ready to find a place to camp for the night, we were still 5 to 8 miles from the state park campground we had picked out as a destination for the night. When we passed by Forest Pond Campground, we pulled in to take a look. It was a beautiful place. There were nice spots to set up a tent, tons of firewood for guests to use, and a bathhouse with solar powered showers! For 10 dollars a night, we decided to stay. There was no one else camping, so we had the place completely to ourselves. The showers took 2 dollars worth of quarters, which we happened to have, with one to spare, so we took a nice warm shower before bed. 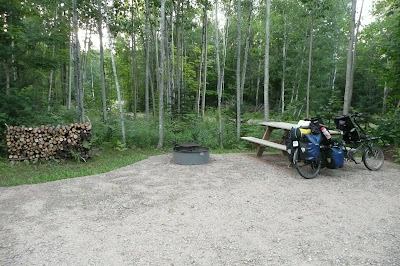 Our lovely little campsite.
Posted by Jenny at Thursday, July 08, 2010