We woke up this morning a little sore, but in good moods and excited at the prospect of making it into Wisconsin by evening! It was also not raining, which we were happy about. Before we got out of the tent we finished up notes for all of the days we hadn't fully written yet, which felt great to accomplish. 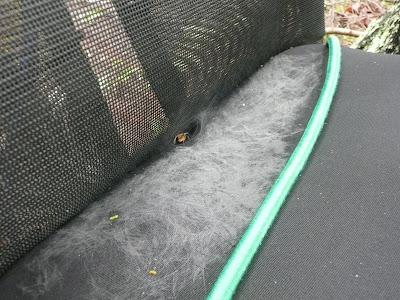 This spider decided that Jenny's bike seat would make a good home for the night. Jenny gave the spider notice as soon as she found out he had moved in.
We were both very hungry, but the mosquitoes were crazy outside. We packed up as quickly as we could, and after taking a short walk around the campground to look at a little bridge, we backtracked about half a mile to the little grocery store in town. The store ended up having a good selection of foods and we stocked up on supplies for our next few meals. We also bought a bag of ice, because even though it was early, it was already very hot outside. After we ate some breakfast outside the store, we spent a while fiddling with the broken bike computer, unfortunately to no avail. We REALLY miss having our computer. Before we left, we also lubed the bike chain.

Jenny looking at the high water after all the rains. 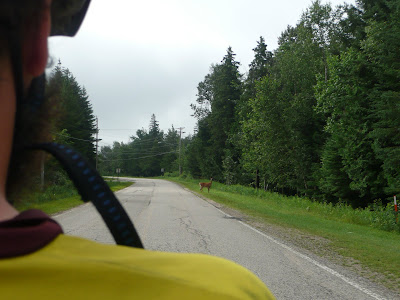 We have seen so many deer, but we still enjoy them when we pass by quietly.
Continuing along Route 2 was tough this morning. It was very hot and we were both cranky. Brett's knees felt okay, but he was just in a bad mood. He was frustrated about the bike computer not working. Jenny just felt tired and hot and wanted to go swimming. When we found a roadside park, with a picnic table in the shade, we took the opportunity to stop for a while. We ate some more food, used the restrooms and tried to relax. 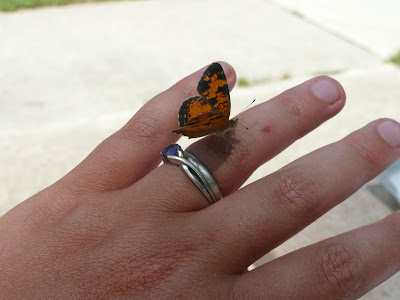 This butterfly loved us. 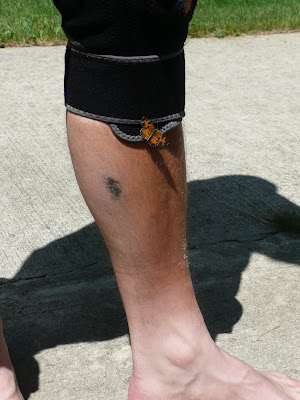 Brett walked all over the place with his new friend riding on his leg.
When we finally set out again, we had a new plan: Bike to swimming spot. Swim. Feel better. According to our map, there was a park with a lake only a few miles off of our route. Jenny navigated us to the turn and we had some nice downhills along the way. When we got to the lake and were almost at the entrance to the park, we saw detour signs and realized that the small bridge (and the entrance to the swimming area) were blocked off because they were redoing the bridge! 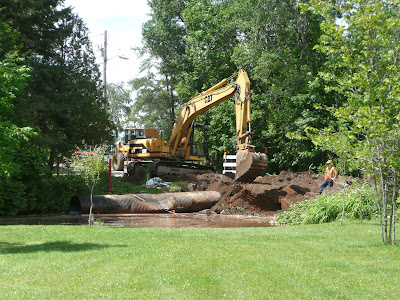 The bridge was really gone!
Pulling off the road into a driveway, we stopped and watched for a few minutes, wondering if there might be a way around the bridge and into the park. The homeowner, who had been out watching and taking pictures, came over and talked to us. We asked her if there was any way around the bridge, and there was but it was all the way around the lake. She kindly offered her footbridge across at the back of her yard, though, which we accepted gratefully. She walked across with us and opened the gate on the far side, which opened up right into the park! 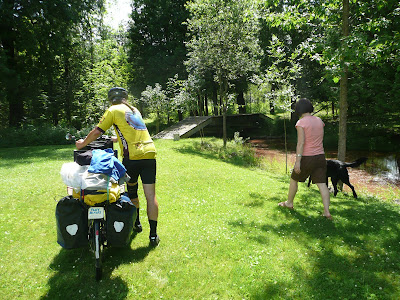 Our detour across the river into the park.
We got ready to swim, and then enjoyed the cool refreshing water. It wasn't a very big swimming spot, but you don't need much to make you happier when you've been pedaling in the hot sun. Feeling cooler, we made our way back to the bike feeling much better about everything. We packed back up the things that we had put out to dry, and headed back to Route 2, still going northwest. 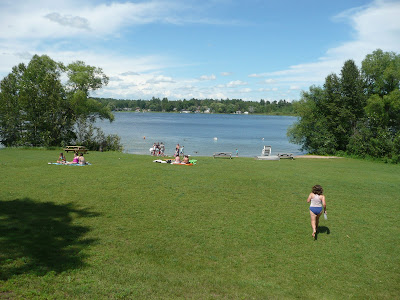 Jenny runs to the water! 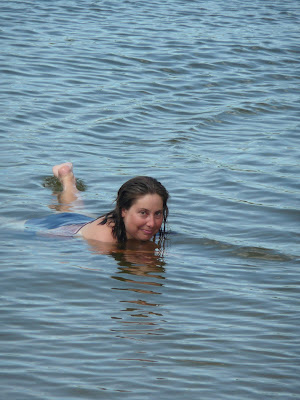 Swimming is a wonderful break from biking on a hot day.
We made it into Norway, bought a map at a gas station and then bought two footlong subs at Subway. There was no Internet signal to be found (or none that would work), even outside McDonald's. We didn't need the Internet, so we didn't stay in town long. It had started drizzling again and in three miles we found a pasty shop! They also had Internet! We bought two fresh pastys for breakfast in the morning, but just as we were thinking of leaving, it started raining harder, so we stayed in the little pasty cafe and spent some time on the computer and the phone. Jenny was happy to get to talk to Jim for a little while. She misses him. 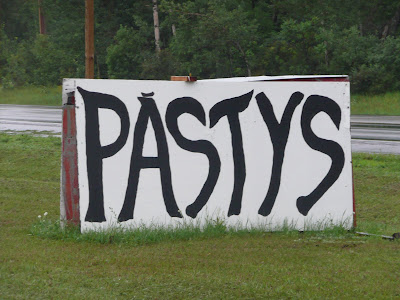 The pastys we got at this store were only our second ones. They were almost as good as the first.
It was getting pretty dark as we biked through the outskirts of Iron Mountain, but it was raining less. When we passed by a Walmart, we decided it was a good idea to turn around and go inside to get a few things while we had the opportunity. The store was even down a short but steep hill. We were proud of ourselves for turning around and stopping. It's hard for us to do, even when we know it's a good idea. An employee at Walmart said it was alright to leave our bike undercover inside the doors while we went in the store, so knowing that our bike would be safe and dry, we did some shopping. We got bike lube, a new bike computer, some fruit, cheese, and a bike light. Jenny tried on a shirt, but she decided not to get it.

It was still raining when we left Walmart and it was now almost fully dark. We knew we were close to the border, and our desire to make it into Wisconsin kept us going. We biked through the small city and then we crossed the border by speeding down a hill and over the river. Jenny had her eyes mostly closed because of the rain and Brett whooped with excitement as we coasted into a new state! 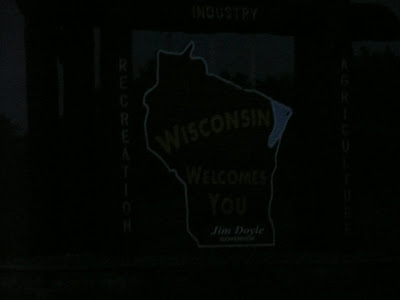 Can you see the "Welcome to Wisconsin" sign?
It was very dark as we pedaled through the first 12 miles of Wisconsin. We were looking for a county park that we saw on our map, but as we got close to Florence, where it was supposed to be, it was nowhere to be found. We pulled into the the town around 11:00 and Brett asked for directions in a bar. Jenny talked with her parents while Brett was inside. It's so exciting when people call us and our phones are on so we can answer. When Brett came back outside, he had directions to the fairgrounds in town which he was told would be a fine place to camp.

It was a little spooky setting up camp in the dark under a pavilion in the large fairgrounds outside of town. We had gotten permission from the man at the bar, but it still felt a little funny. It was still lightly raining as we split a delicious pasty for a snack, brushed our teeth and climbed in the tent for the night. It hard to get to sleep because we kept hearing sounds. Eventually we did drift off, but slept fitfully.
Posted by Jenny at Wednesday, July 07, 2010