We were both very tired when we woke up this morning around 7:00. Jenny had to use the bathroom, but she was afraid the mosquitoes would get her, so she went back to sleep for a little while longer. We decided to brave the outdoors around 7:30. Brett went out first, and Jenny followed. The mosquitoes were still there and almost as bad as they had been the night before! Constantly moving, we quickly took down the tent, shook everything out, packed it away, and went to put our shoes on in the bathroom. We took turns swatting the bugs while the other put on socks and shoes (the mosquitoes were even in the bathrooms!) and then we got out of there as fast as we could. 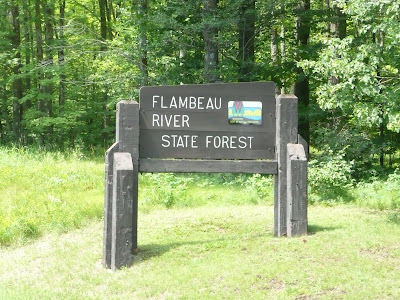 We biked through a lot of State and National Forests.
Once we were on the road, we felt relieved, and hungry. We had been in too much of a rush to eat anything for breakfast and now that we were biking, we didn't want to stop. As soon as we turned back onto 70, we saw a bald eagle fly overhead! It was early enough that it was still somewhat cool, and besides being hungry, we felt good. There were a few deer flies following us, so that contributed to the not wanting to stop as well.

It took us an hour and a half to bike the 15 miles to the town of Fifield. We found a breakfast place and thoroughly enjoyed our first meal of the day. After eating we spent a little time writing before we moved on to the grocery store in town. We never know what we're going to find in the little towns that we pass. Sometimes the stores we go into have nothing besides white bread and soda. Other times they pleasantly surprise us. This store had lots of local products, natural and whole foods! We were eying some beef jerky and wondering what was in it (there were no ingredients on the package) when the man working behind the meat counter came over and told us that they make the jerky there and they don't put anything in it besides spices and some nitrate! We got some to try, along with some nice hard cheese for later.

We enjoyed seeing wildlife today. We passed by a baby deer standing very still under a tree by the side of the road. When we circled back around to take a picture, the faun was still there. A little while later Jenny spotted some wild turkeys on a hill, and we saw a few birds of prey in the sky. Jenny kept looking for bears in the woods, but none were spotted. 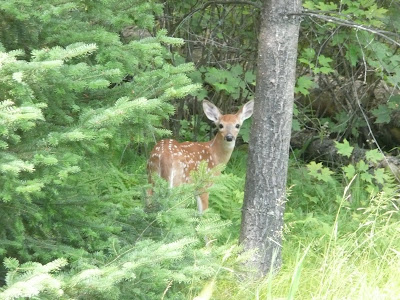 Aww!
In the afternoon, we turned off of Route 70, leaving it behind for good. We felt sad to be leaving it, since it was such a nice road to bike on. As we headed northwest on County Road B, we started looking for a place to stop so we could cook a late lunch. Our criteria: a place to sit, without bugs, and shade. 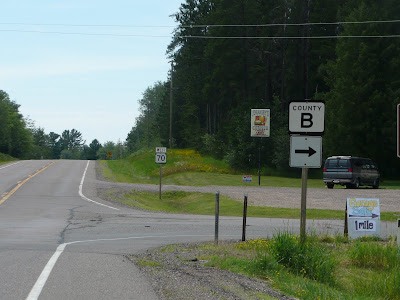 Route 70 was a great road. We will miss biking on it.
It took longer than we would have liked, but we found just the spot as we were about to cross the west fork of the Chippewa River. There was an RV park there, a restaurant/bar, and a boat launch. Boating and fishing are huge in this whole region. By the side of the river, we spotted an unused bench in the shade. There were a few bugs, but nothing compared to the horrors we sometimes encounter when we try to take a break.

Our late lunch consisted of egg noodles, broccoli, baby zucchini, garlic, oil, salt, and a touch of cayenne, with the extra sharp cheddar somewhat melted into the mix. The garlic really made the meal, and it went down nicely with the ice water that we made from the bag of ice we bought there. 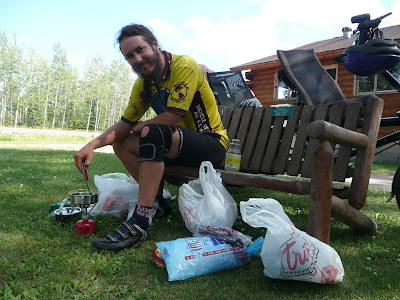 Brett cooks up some food. It feels good to stop in the shade. 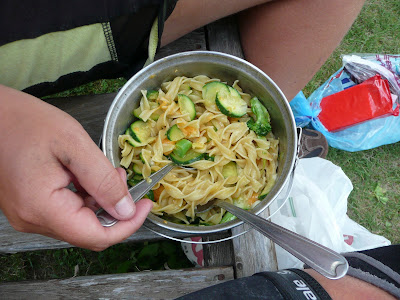 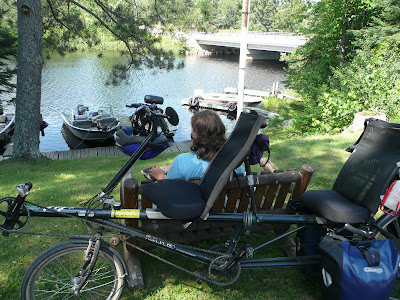 Jenny takes advantage of the relaxing spot we found.
The computer picked up a wireless signal, so we did a little updating of the blog, which has been neglected quite a bit since we got to Wisconsin. We love the state's roads and scenery, but haven't made time for finding the Internet, which seems harder to do here. After updating the map and posting a day's entry, we looked for campgrounds just a little further west. We didn't really find what we were hoping for, so we set off without a real plan.

We had a choice, it seemed: try to find a campground soon and finish riding quite early in the evening, or ride a lot more miles and see how far we made it. Both options sounded good, and we were feeling a little tired but basically fit to ride until dark. Still, we decided to finish early so we could rest and work on journaling our great adventure. There will be other days to push for every last mile we can squeeze out.

A quick stop at a restaurant helped us locate a large campground just five miles away. Unfortunately, four of those miles will have to be biked tomorrow, as they take us south on County Road CC. Our only real worry was that Sisko's Pine Point Resort would be full on a Saturday evening, but it wasn't. We found a beautiful spot up above Lake Chippewa, with a brisk breeze blowing away pesky mosquitoes!

Once again, we had excellent and friendly neighbors. The couple next to us excitedly asked about our trip and offered to feed us corn on the cob and chicken when it was done cooking. But that wasn't all! The fellas across from us talked to us for quite a while, sharing travel stories and marveling at our journey. They also offered us dinner: salad fixings, sausage, and RIBS. Yum! We were double-teamed, so we had to accept both offers. We had delicious corn, then went over to Don and Randy's table for ribs, sausage, and veggies. Thanks to all who offer out of their hearts to others. 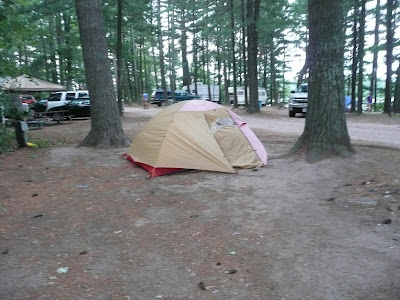 Our campsite wasn't much, but the view over the lake was great and the stiff breeze kept the bugs away!
The campground had Internet, so we used that some after dinner. It felt marvelous to be clean after a nice shower and to sit outside at picnic tables and not get eaten alive and driven inside our tent! We posted again, and wrote a bunch more. We cleaned up our spread-out mess, then hit the tent for a few more typed words, and a well-deserved sleep, even if it took us a little while to get actually fall asleep.
Posted by Jenny at Saturday, July 10, 2010