We woke up early, but as we often do, we took our time getting up. We like having a relaxed start to our day, even though getting an early start is something we almost always wish for the night before. Our morning consisted of packing up, uploading pictures, and planning our route. We love to look at the map anyway, and sometimes we actually have decisions to make. The campground was really quiet, as it was a weekday, so we enjoyed our time to ourselves and made a nice little meal of pasta and red sauce, cheese and broccoli. Wally, the owner of the campground, came over and chatted with us for a while which was really nice, too. We even spent time exploring the unique playground they had created over the years. 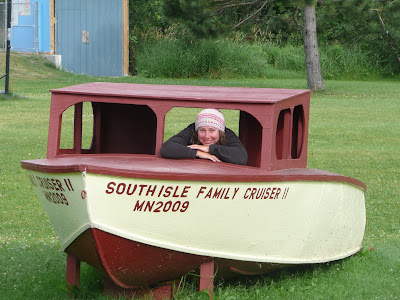 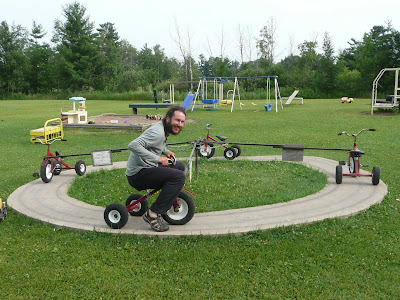 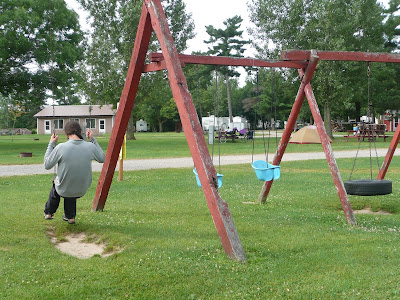 Playgrounds are fun. We think more adults should play in them.
When we got back on the road, Jenny wasn't feeling tip-top, so we took it easy. We pulled into Isle, curious about the town and looking for fuel for the stove. The hardware store didn't have it, but they suggested a few other stores a while later on our route. We talked to some fun folks in the parking lot, and they asked us all sorts of the common questions about our trip Then we headed across the street to Isle Bakery and bought two treats: an apple fritter and a raspberry cream-filled donut. We split the apple fritter right away, and it was amazingly good. 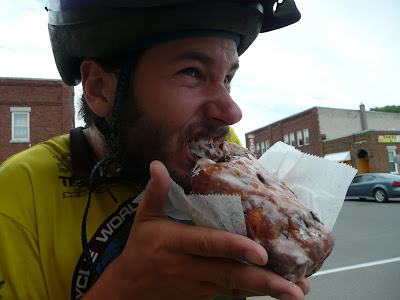 Brett takes a turn om nom nomming the amazing fritter!
Finally rolling out of town, we were fighting wind, fatigue, and whatever was ailing Jenny. A little while later we saw a boat launch, and pulled in to take a nap. Jenny rested on the tarp for a good 20 minutes while Brett used the time to do some writing. When Jenny got up she was feeling a lot better and it was Brett's turn to take a nap. After our break, and consuming the raspberry cream-filled donut, we set out again. The wind was still strong and against us, but we pushed on and made it into the town of Onamia.

Both of the stores we checked outside of town didn't sell the fuel for our stove. We were excited to find a pair of Keen's for Jenny, however. Brett was very patient and encouraging while Jenny tried on the shoes and finally decided on the right ones for her. Jenny has a tough time buying shoes. It is so hard to know if they will be comfortable after you leave the store. Brett has been really enjoying his Keen's, so we have hopes that Jenny will feel the same way about her new footwear. 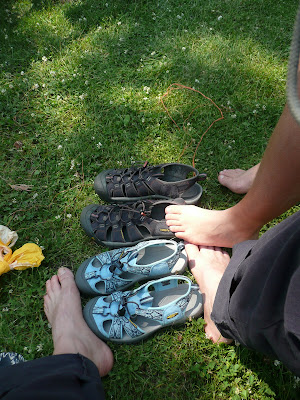 Matching shoes!
The temperatures never got too hot today, which was a welcome change. We pedaled on, enjoying the scenery of farms and flowers along Route 27. About 10 miles out of Onamia, we decided to take smaller County Road 47 because it went more directly west. 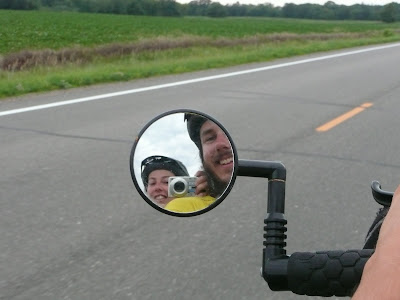 Another mirror shot to add to the collection. It's fun to take lots of photos!
One highlight of our day was crossing the Mississippi River! This was our first big-name river crossing since the Hudson River we crossed on Day 2 of our trip. The bridge was nothing special, but we looked from the sides as we crossed and smiled at each other in the mirror. The river wasn't very large here, so far north, but it still felt significant. Directly over the river we came to Camp Ripley, a very large military base. It was a little daunting to ride alongside the fence for a few miles, looking in at the camouflage Jeeps, tanks, and large buildings. Loud planes kept flying quite low overhead. We were glad once we were past the base. 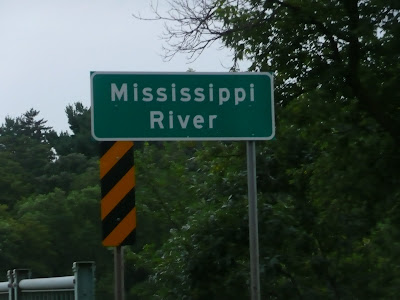 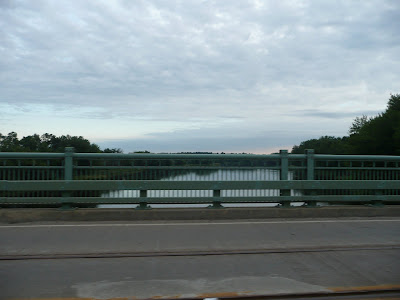 The view from the bridge.
There were clouds in the sky, and they seemed to be gathering for a storm, so we hoped we could make it to a campground before it started to rain. We sang songs to try to stay upbeat, and when we got close to Randall, we were tired and called ahead to a campground/motel to ask about staying there. It turns out they don't have bathroom facilities there, so tenting was out, and there isn't much else in Randall, MN. We took a few minutes to adjust to the news that the motel room was the obvious choice, and the owners even gave us a little discount because we were coming in on a bicycle.

In the end, staying in the motel room was great. We were dry when it started to pour outside. We got to watch the end of the Major League Baseball All-Star Game, which had been a hope of ours anyway. The room was really cute, and we did have Internet access which always soothes us a bit. We fell asleep with hopes to get up really early, and make it to Selena's parents' by lunchtime! 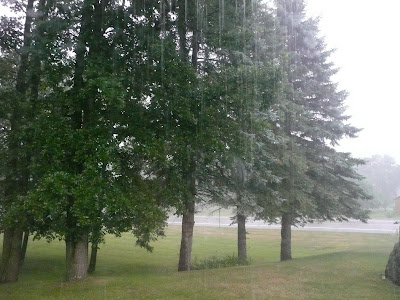 The view from our motel room window. Note the rain streaming off the roof. It was nice and dry inside!
Posted by Jenny at Tuesday, July 13, 2010