Up early, we didn't feel like getting out of the tent right away, so we didn't. When we finally did venture outside, we found a beautiful morning awaiting us, with cool temperatures and a little breeze. We were gone from the campground by 7:30, already in good moods. We left without having eaten breakfast, but didn't feel the hunger for a few miles. We were hoping to find the health foods store listed on the campground's brochure.

We did find the store, but there are some drawbacks to leaving so early: the store doesn't open until 10:00 A.M., and it was only 8:30 when we got there! We continued on, with our spirits still quite high. We had a couple things to help keep us in the good moods. One was the new bike computer. Today would be the first full day of riding with it working properly. The other thing that made us happy in the morning was our wildflower count. We were counting to see how many different wildflowers we could spot. We saw at least 23 different wildflowers by the sides of the road, and we were really amazed. There are so many, but if you don't look closely, some of them will slip by unnoticed. 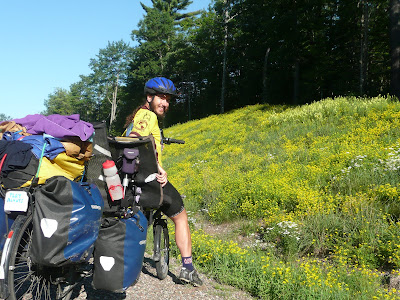 We saw so many different kinds of flowers! Most of them were yellow.
We arrived in Eagle River hungry and happy, ready for some food and a break. We found the grocery store, Trig's, and started picking out foods. We bought broccoli, zucchini, garlic, hummus, bread, Bavarian cream-filled donuts, Virginia ham and turkey pastrami from the deli, a 3-pack of non-perishable rice milk, two avocados, a peach, $.39 of lettuce from the salad bar, and two bowls of chili to eat right away.

After buying our food, we sat outside on a bench, ate our chili, made a few phone calls and checked email and the blog with an Internet signal we found coming from somewhere near by. Lots of people stopped to talk to us while we were sitting there. One woman said that she and her husband have the same bike! She told us about the time she hiked the Appalachian Trail and kept a blog of her travels. She said that she kept a paper journal and called her husband back at home every few days to read what she wrote. He would then type it into an email for others to read. She said that every time she went on and read his email she thought, “Man, I'm having a good time!” 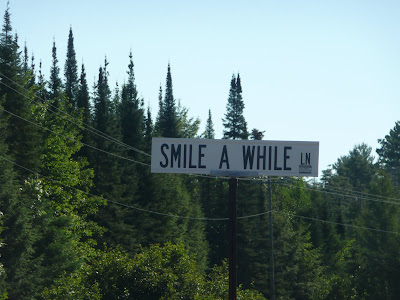 This would be a nice road to live on, we think.
Once we decided to ride rather than work on posting to the blog, we set off around 10:45. We made our way back to Route 70 from in town, and continued west. Just west of Eagle River the road was very busy, and that makes for less pleasurable biking. It was hot, with just a few clouds sprinkled in to keep us from overheating. Pretty soon Jenny even found an alternate road to take that looked less busy. It had the same amount of sun, but far fewer cars, and along the shoulders were painted bike lanes. It's nice to know that some road planners are designing things with bikes in mind, or at least helping cars be aware of bicyclists. We did see more bikes along beautiful County Road J, so something is working. 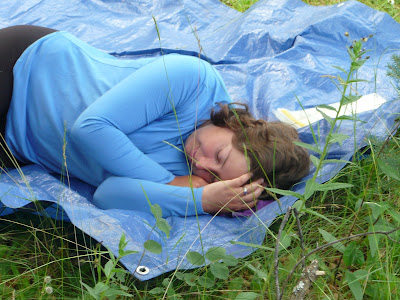 Jenny took a little nap on the tarp when she was feeling sleepy in the late morning. 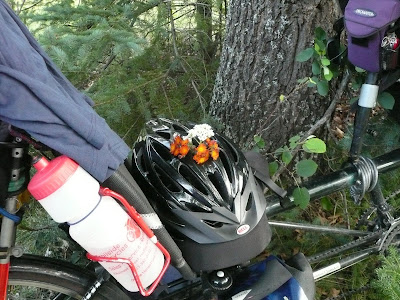 When she woke up, she found a bouquet of flowers in her helmet! Aww!
One thing we did to pass the time today was to race against time a bit. We were very close to 11 miles per hour as an average speed, and as we approached the 3 hour mark today, we raced to see if we could ride 33 miles before the 3 hours were up! It was very close, coming down to the last ten seconds or so, but we are happy to report that we succeeded.

Soon after our race against the clock, we found a lake! Carroll Lake is a nice, clean lake with a park adjacent! We turned in and immediately set about going for a swim. Most folks use the park as a place to launch their boats to go fishing. Even the bald eagles use the lake for fishing. Yes, that's right: bald eagles. For people out here, bald eagles aren't rare, but where we come from they are a treasured and uncommon sight. We saw one or two swoop down to grab a fish from the lake, and just after the lake we saw an aerie. 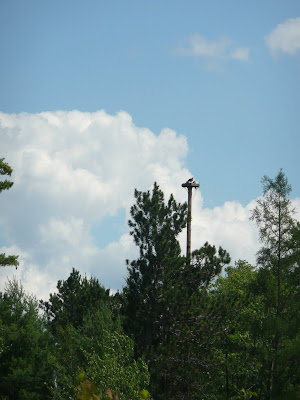 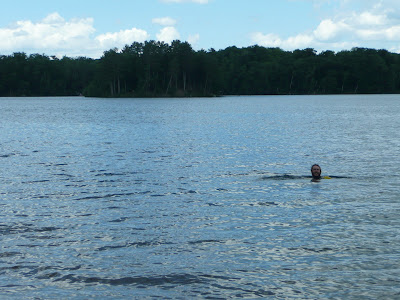 Brett cools off in Carroll Lake.
We ate some delicious sandwiches from the food we bought earlier, applied lots of sunscreen, and then got back on the road. We turned back onto busy Route 70, heading west of course, and found that once we got away from the businesses, the road grew quieter and less traveled. From the map, we expected the next section of Route 70 to be desolate, with nothing and no one. Instead, we found more activity than the day before, but it was still pleasant riding. 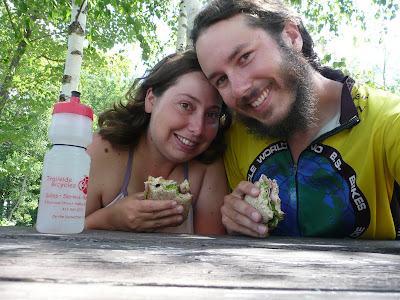 We made the most delicious sandwiches for lunch. 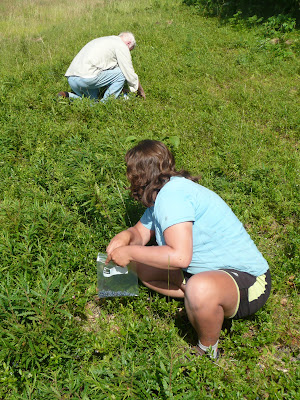 After we left the lake, Brett spotted a patch of wild blueberries growing along the road. Another man was picking them already, but there were enough to go around.
After a while, it did get less populated, though. The deer flies started swarming us, so we had plenty of company. We tried to go faster to shake them, and we even tried “evasive maneuvers” but they were persistent. The terrain was pretty flat, but when we would go down a hill we would lose them for a little while.

We were excited to cross into Price County, but even more excited to get to 60 miles! We were looking for a park to the north, but the parks aren't all that well marked. Usually there is just a sign on the highway that says there is a park to the left or right. The sign rarely says how far, or even the name of the campground. We were guessing from the map and from our mile count that the turn we came to was the right one, but we weren't sure.

The road off the highway was gravel and dusty. We were surrounded by deer flies, and it was a bit tense as we pedaled toward what we hoped was the end of our day. About two miles off of Route 70, we saw a beautiful covered bridge and the campground just before it! We were relieved to be at the end of our day with more than 66 miles done, and it was only about 7:30! This was our 3rd longest day! 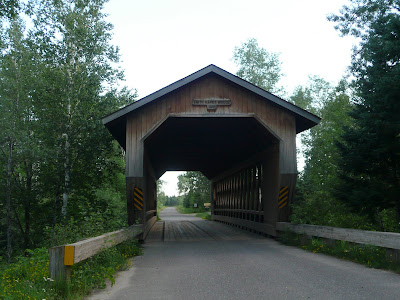 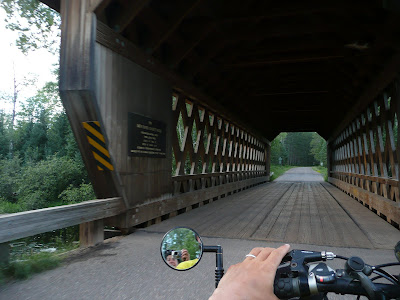 We really liked the sides. 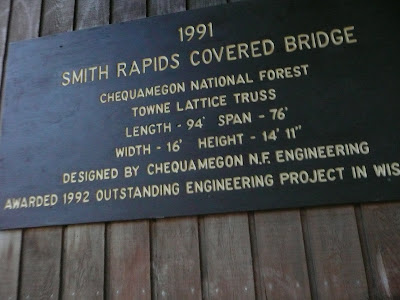 Everything was great, until we started unloading the bike and setting up the tent. There were more mosquitoes at that campground than you can shake a stick at. We were not happy, and the mosquitoes were. We managed to get the tent set up and we got inside the tent for the night after tying up the bags. Even going to the bathroom after that was an ordeal. We had brought the food in with us, so that wasn't so bad, but when we went to put it outside the tent after we were done, a SWARM of mosquitoes flew in!!

We almost panicked, because even though mosquitoes are tiny, when there are 60 of them and only two of us, it can seem overwhelming to try to kill off that many before they get us. It took us quite a while, but we managed to kill all of the little insects after perhaps 10 or 15 minutes. Then we practically collapsed into sleep.
Posted by Jenny at Friday, July 09, 2010