It was raining when we went to sleep in the tent, and it was raining when we got up at 7:15. Sometimes it's really hard to get up when it's raining and wet, but this morning we got up more easily, maybe because we had company in the campground. Jenny made breakfast while Brett packed up the tent, but Tom was still ready to go first. We weren't too far behind. 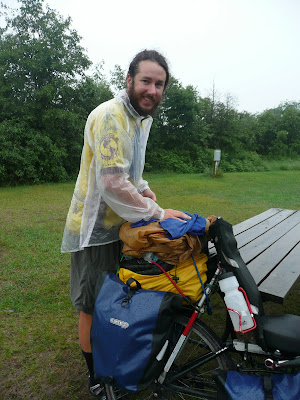 When it's wet, we strap the tent fly and other wet stuff on top of the bags.
The rain started falling harder and more steadily as the morning progressed. We made a “deal” with the skies that it could rain as much as it wanted on the way to Escanaba as long as it was dry when we left the city. You never know if the sky will keep its end of bargains like that, but we sure hoped it would. We were already wet by the time we got back out to Route 2, and morale was a little low.

To lift our spirits, Jenny started singing. Once we'd been through the songs we know fully, we felt quite a bit better. Nearly daily we sing “Ol' Jack” (Bill Staines), “The City of New Orleans” (Steve Goodman), “The Lilac and the Apple Tree” (Kate Wolf), and “Barrett's Privateers” (Stan Rogers), but we add in some others, too.

Besides the singing, seeing a family of sandhill cranes also brought us up. We love seeing wildlife of all kinds, but the cranes are pretty neat. 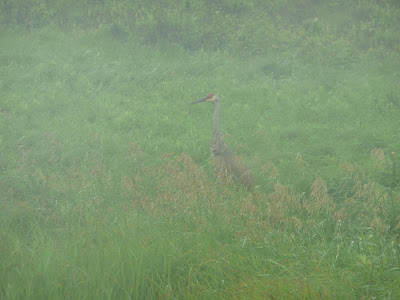 Jenny is used to seeing sandhill cranes in Florida, but it was exciting to see them here when we were least expecting to.

We didn't make many stops, partly because of the rain, and partly because we were still behind Tom and hoping to catch him. We passed him when he stopped to buy a new knife along the way. Shortly after that, we took a break for a snack of carrot, cucumber and chips. A little while later, Tom caught up to us, and we rode together along the smaller, quieter roads into Escanaba. We were glad for a chance to rest, but also a break from driving on the gritty, messy shoulder, full of sand that gets thrown up on Jenny's legs and nails and tacks that Brett attempts to avoid.

We found an Internet signal at the public library in Escanaba. Unfortunately, since we were wet the inside of the building was unbearably cold. So, since it had stopped raining, we cooked outside on some benches. 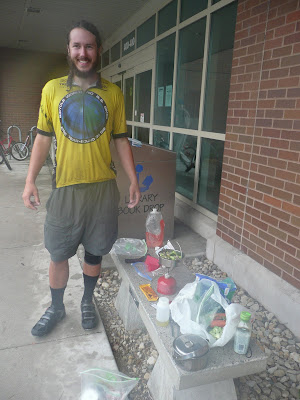 Can you tell that Brett's clothes are soaked?
While the three of us were outside eating and looking at maps, lots of people stopped on their way in or out of the library to ask us about our trip. A few were particularly curious or helpful. One man gave us a county map, and talked to Tom about his route. Another woman talked to all of us for quite a while, saying she has ambitions of biking across the country someday, too, and hiking the Pacific Crest trail. A third woman must have overheard us explaining things on her way into the library, because she came back a few minutes later and handed Tom $20 saying, “I hope your dreams come true.” Tom said he thought her eyes might have been misty. Tom was thoughtful and generous, too, as he gave us half. We haven't seen that kind of generosity much on this trip, but we've seen all other kinds in abundant amounts, and we're so thankful for everyone's help and support. 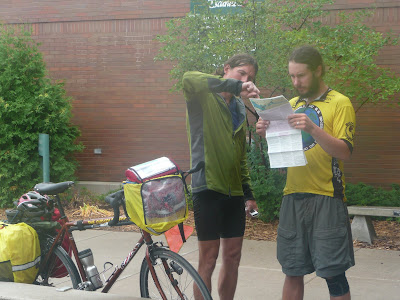 Tom and Brett look at maps.
After we finished eating and cleaning up, Tom was ready to get going and we were ready to brave the cold and spend some time inside where the Internet connection was better. We exchanged hugs and goodbyes before going our separate ways. We really enjoyed the time we got to spend with Tom, and maybe we'll run into him again in our travels. For now our paths really do diverge, because while we were continuing west, he was taking a detour south.

We ended up staying inside the library working on the computer for a long time. While we were inside it started raining again, including one huge downpour. Brett stepped out long enough to move the bike under an overhang more, but otherwise we stayed inside, shivering. We looked at a road atlas to get a better idea of where we're going in the days and weeks to come. The library also allowed us a chance to charge up our phones and the computer.

Leaving the library when the rain had once again stopped, we asked at the local Chamber of Commerce about campgrounds in the area west of Escanaba. They didn't really know of any. We were also hoping they might have a map of Wisconsin, but they didn't. We hurried over to the offices of the Department of Transportation, but got there just minutes after they closed for the day, so no map for us.

Our next stop was going to be the most exciting of all: RadioShack for new batteries for our bike computer (both the sensor and the display unit)! The store was open, they had the right batteries, and we bought a 3-pack. However, the darn computer STILL didn't work after all that!! There was much disappointment, but there was nothing to do but ride on at this point, still without an odometer. 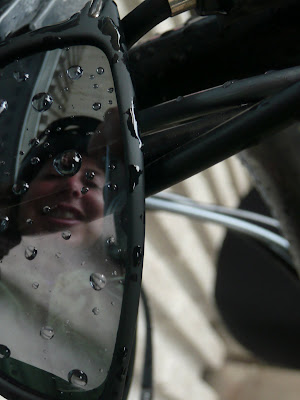 Jenny plays with the camera while Brett is on the phone with Spartan talking about the bike computer.
The sky had started to clear up and we tried to ride away, but our shorts and seats were still wet from the morning's rain, and so we were very uncomfortable. We tried to tough it out, but a block later we decided to change clothes when we found a porta-potty outside a school. Jenny still had some trouble finding a pair of shorts that were comfortable, and we were disgruntled by all of it. It's hard to be comfortable when most of our clothes are dirty and our bike seats are wet. Finally, we figured out a set of clothes that would work well enough and left Escanaba on 8th Avenue heading west. 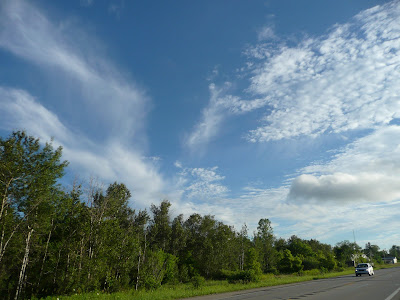 Finally, some blue sky!
Several miles west of town we met back up with Route 2. At this point we realized that we really should have bought some more food back in Escanaba, because there was nowhere to buy groceries for miles in the direction we were headed. We were also coming to a decision about which way to go. We were considering heading toward Crystal Falls on Route 69, which would have less traffic than Route 2, but Route 2 might have more places to buy food.

We stopped at the golf course we came to and asked about places to get food. Hearing we wouldn't find much, we decided to eat something from the restaurant there. We talked to several people there, both about our route and about campgrounds in the area. They told us the campground we thought was on Route 69 was actually east of us, but that there was a town park in Powers, right on Route 2. As much as we were eager to be on a road smaller than Route 2, it was clear that in our situation the right choice was to head for the campground in Powers.

About five miles down the road, we realized that Brett's phone was still at the golf course. This was annoying, because it was the very first time we'd actually left something behind! We didn't panic, though, and called information to get the phone number for the golf course, which we then called. The woman who had served us answered the phone and we explained the situation. One of the men we'd spoken with there got on the line and told us that the manager was driving past Powers and would drop the phone off at the base of the flag pole if he didn't see us along the way. We were so thankful for all their help, and we hoped it would work out.

A few miles after that, we crossed an exciting boundary we hadn't crossed yet: a time zone! Crossing this point made us really feel like we'd biked a long way. We were in a while new time zone! And we BIKED there!

As we neared our destination for the night, we spotted three skunks along the sides of the road. Thankfully, we passed by them stink free, though one of them turned around and lifted its tail in a threating way when it was startled by our presence. We were both very tired when we made it to the campground in Powers. The mosquitoes where terrible, so we set up the tent and went right inside. We both fell asleep almost as soon as we lay down. Jenny got up after about an hour and went out to retrieve Brett's phone from the flag pole (it was there, yay!!) and to secure the bags for the night. Another long and tiring day done! 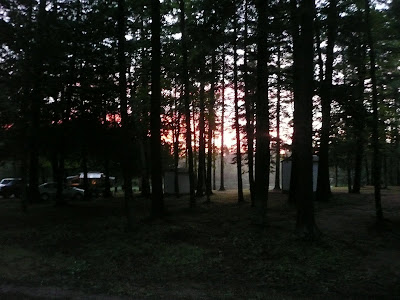 A quick picture of the sun setting, snapped by Brett, before he dashed inside the tent for the night.
Posted by Jenny at Tuesday, July 06, 2010