We both slept well last night and enjoyed a warm breakfast of eggs, sausage and potatoes, thanks to the nice family camping across from us. People have been so kind to us throughout our trip. We are always so amazed and grateful when people open their lives and share their food with us. This family was particularly generous and easy to talk to.

The head park ranger came over at one point to collect payment, since he hadn't been there the evening before. Steve was impressed with our trip, and said that he writes outdoorsy articles for a local paper. He took our picture, and a few notes, and asked us to email him few other details later. Who knows if the article will come to fruition, but it's fun to think that other people might have a chance to read about this trip which has been inspiring for some. 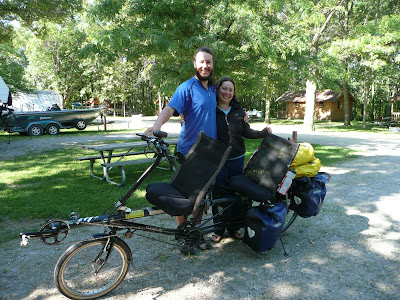 Steve took our picture, and maybe we'll be in the paper!
Since we had Internet to use, a charged computer and a nice place to sit and work, Brett did some writing while Jenny packed up. Brett had just about finished writing up a blog entry when something crashed and the file he had just been working on was lost! This is always hard to take, and though we searched for a backup of the file for a long time, we didn't fine one and resolved that the only thing to do was start over and write it again. Brett said he thought he could rewrite it pretty quickly, and so he did. 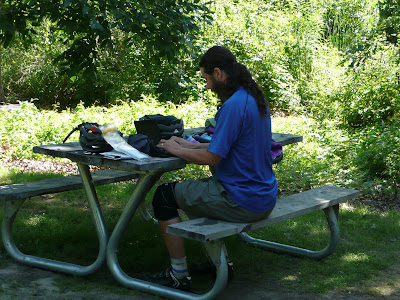 Computers can be frustrating, but we love keeping this blog.
We were excited to post to the blog and get closer to caught up, but soon we were ready to be riding. Our first stop was at Subway to get sandwiches for lunch, which we saved until we found a nice roadside park. The roads were busy for a while, after we got back to Route 23 North. We don't generally mind the busy roads, as long as they have a good shoulder (wide and clear of debris). The parts where there are tons of turns into parking lots for store after store are not our favorite at all, though. Thank goodness we tend to go through smaller towns!

Today the terrain changed. Perhaps it would be just as accurate to say that the use of the land changed. Instead of field after flat field of corn, soybeans or wheat, we saw forests again, and more evergreen trees. We even had a few hill-like bits. 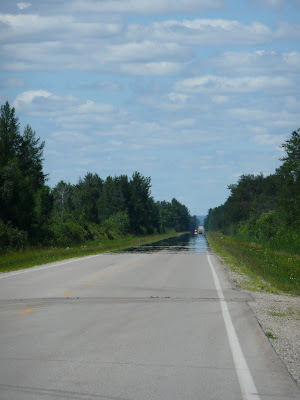 This bit was so flat that there was a cool reflection of the trees and sky in the road!
We had some pretty good sun today, and Jenny had wanted some longer pants for some time now. We stopped for a few things and a break at a Kmart, and Brett helped convince Jenny to get a pair or stretchy black pants. They are longer than Jenny wanted, but work great rolled up just a bit! 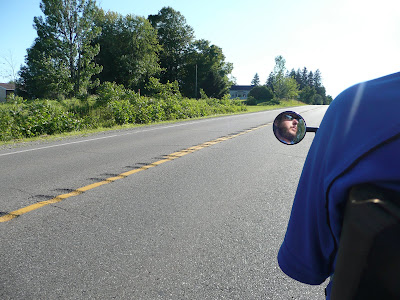 Most of the good-sized roads in Michigan have a rumble strip in the middle. Cars and trucks are very noisy when they cross over it.
Just before we got into St. Helen, there was an amazing stretch of downhill. We really enjoyed that, after days of flat cornfields. We miss the hills, just a little bit. We asked about campgrounds at a store, and were told of the town's park, just a little to the east of the center of town. In a matter of minutes, we were there, right next to a rural airport.

We were SO HAPPY to be at our destination before dark! We set up on a site, took a great shower, and ate a little bit, but we were so tired that we mostly just fell right asleep after that. This campground, we should note, was just updated: new electric boxes a day and a half before our stay, new bathrooms/showers. Everything looked great! 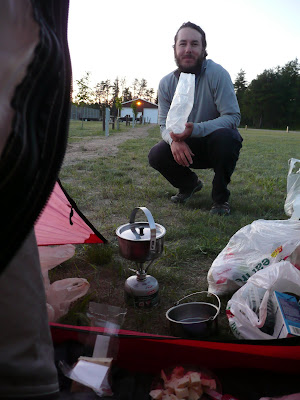 Brett munches on a snack while waiting for dinner to be done cooking. 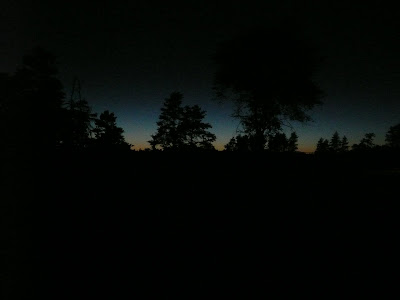 The view from our campsite before we turned in for the night.
Posted by Jenny at Wednesday, June 30, 2010