After a bit of a restless night because of thunderstorms and raccoons, we packed up slowly and didn't leave Turkey Point Provincial Park until about noon. So much for getting in a pattern of early starts. The first section of the day was a little bit hilly, dropping down to creeks and then climbing back up again. It was also raining on and off, but never hard. Gradually, the weather turned to burning sun, with a few clouds providing intermittent relief. 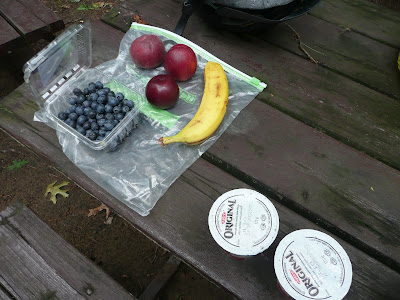 Having our first breakfast is always a highlight of the day.
It seems like half our highlights are about meals, but eating food is fun, and it sure does break up a day of riding. We stopped for a self-made lunch by the side of the road just west of St. Williams. We munched potato chips and cookies that we picked up in St. Williams, plus a bunch of food we'd been carrying since Port Dover: pita bread, hummus, avocado, juice, cheese, salami, etc. Sometimes the simple foods are the best. 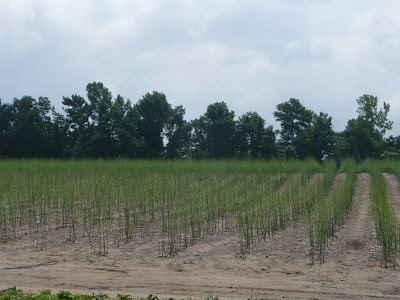 A field of asparagus we passed today. 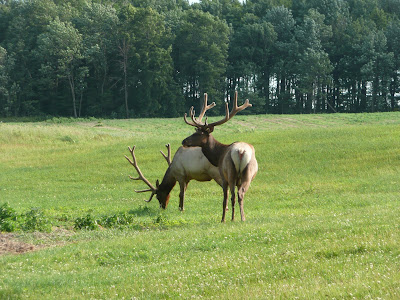 We also passed these animals! They were in a fenced area, not in the wild, but it was still fun to see them.
A few miles after our lunch came our after-lunch nap. The naps we sometimes take in the middle of the day really seem to help our energy levels, and we feel like we're listening to our bodies. After the nap, we noticed a few wind turbines again. Soon though, we realized we were riding into a “full blown” wind farm! At one point we counted as many as twenty-five turbines in view. 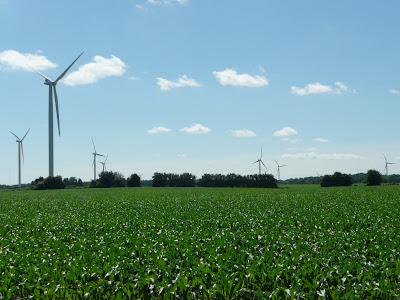 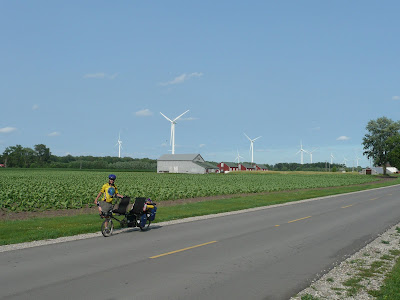 So many wind turbines!
We love the idea of wind turbines as a source of power. We think they're very pretty, though we don't live in a wind farm, and could understand some other viewpoints. Mostly we love the idea of harnessing the renewable energy sources. We stopped to read four big signs about the wind farms in the area. We had been asking each other all kinds of questions about the turbines, so it was nice to have a few of them answered. The project the signs talked about produces enough electricity for about 24,000 homes. 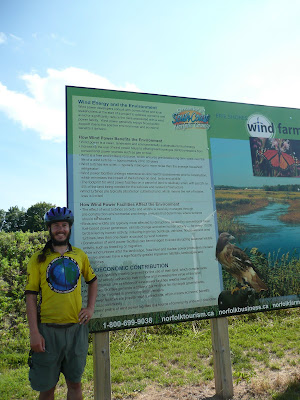 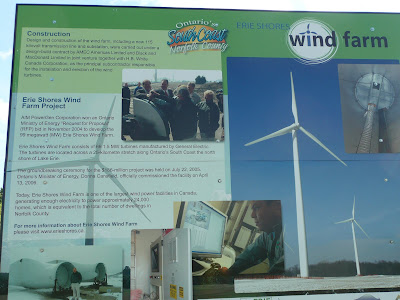 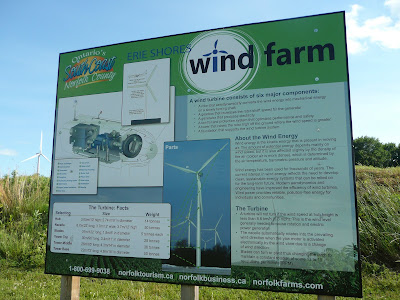 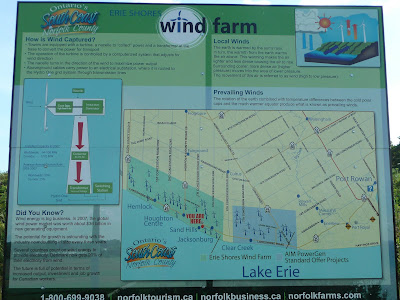 After the wind farms, we continued along the shore road until we came to an intersection where the shore road had a sign: Road Closed. Sometimes a sign like that just means they don't want through traffic, but you can get through, and sometimes it means a bridge is out and you really have to go around. We were contemplating our options and looking at our map, when a fellow pulled up in his car. He got out and said, “You look like two people with questions!”

Ron gave us information about the roads in the area, and invited us to stay at his place instead of the Provincial Park a little further west in Port Burwell. We hadn't gone many miles yet, and it's often hard for us to stop earlier in situations like this, but sometimes it's best for our bodies. Ron urged us to at least stop by for a drink, even if we pushed further on.

Ron calls his place Monarch Landing, because he saw lots of Monarch butterflies there before he acquired the property. He has turned what was once a corn field into a paradise for butterflies and birds. He has planted many different species of plants (both native and non-native), created walking paths around the property, and built a few small buildings. He hosts field trips and local nature clubs. To top it all off, he has a breathtaking view of Lake Erie from atop the cliffs the bank swallows love to build homes in. We had noticed the bank swallows all afternoon, swooping in large numbers over the hedges and fields in the area. We wish we had a video of their beautiful flight and huge numbers to share with everyone back home. We'd never seen anything quite like it. 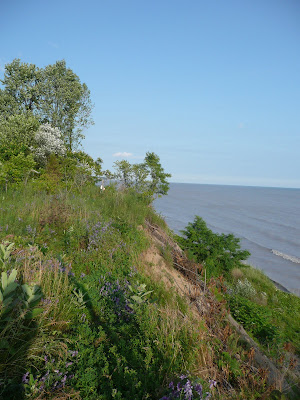 The cliffs in the back of Ron's property are where the bank swallows make their nests.

Since it was getting on to evening, we ended up deciding to stay at Monarch Landing for the night. Ron drove us into town for dinner at the beach. We ordered burgers from Val's stand there, and tried poutine (gravy and melted cheese over french fries) for the first time.

We looked at maps and talked about all kinds of fun stuff with Ron, and then settled our heads to rest in the building he calls the Community Learning Center. It was fun to be inside, and we slept until the birdsong woke us up in the morning. 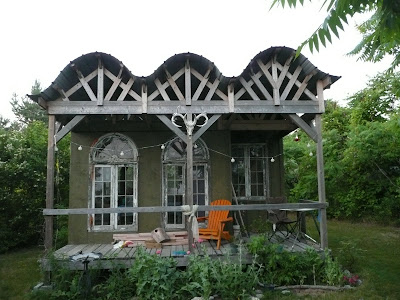 We stayed in this beautiful house. 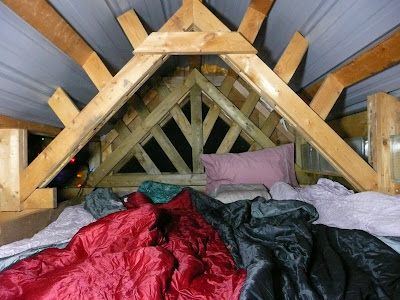