In the morning, we got up and started packing up the gear. Denise and her boyfriend Aaron came out and we all chatted for an hour or two before we hit the road at 9:30 A.M.. They are such nice people, and really easy to get along with. Jenny has known Denise for years, as they grew up going to homeschool events together. It was great for Brett to meet both Denise and Aaron, and for Jenny to meet Aaron. It's too bad we can't visit longer with everyone we see and meet, but it was lovely to get some hugs in. Thanks Denise! 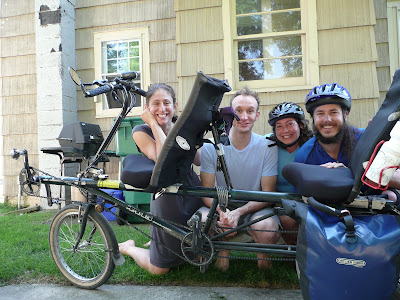 Yay for visiting friends! (even if it's only for a brief time)
We retraced our way to the canal path and stopped at the local bike shop long enough to have them look at the quick release lever that holds the steering column in place (ideally at the right tension). Something in the lever had 'popped' a while back, and although it was still holding together, it wasn't able to be tightened anymore. It certainly wasn't going to last us the entire trip, either! So, we spent the $10 to replace it without any qualms. 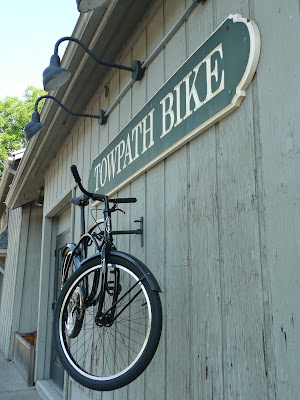 We were glad to find a nice bike shop right along the canal path in Denise's town.
Despite the beautiful weather for biking, we were cranky and spent a slow morning on the path along the canal, making lots of stops to rest on the grassy banks by the water. One of our breaks was under a ripe mulberry tree, giving us a nice little snack. After we passed Rochester, we left the towpath behind in search of food for lunch. With luck, we found a Chinese place that also had Internet! After we were full, some pictures were uploaded to the blog, our email was answered, and we had looked at some maps, we decided to leave the towpath behind for good and bike north to stay at Hamlin Beach State Park for the night. 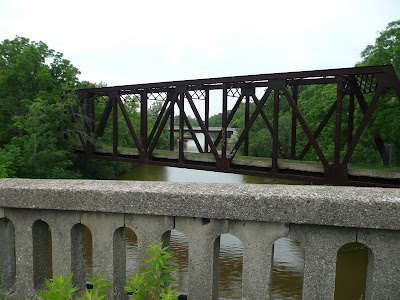 Pretty bridges over the Erie Canal near Rochester. 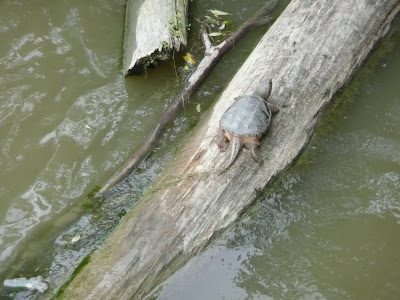 This snapping turtle was sunning itself below one of the bridges.
Our ride north to Lake Ontario felt FAST! Maybe it was all the time spent on the slower non-paved towpath, or the roads north were downhill, but we were zooming! It was very exciting to get our first glimpse of Lake Ontario. It looks like an ocean. We stopped at the first little beach that we came to, took our shoes off and waded in up to our shorts. The water was very cold, very shallow and very green from algae. 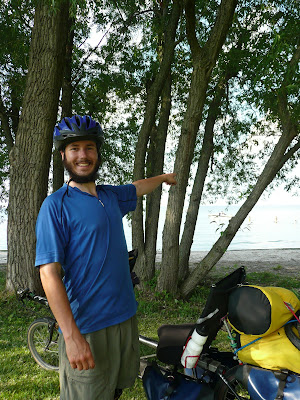 Look! We made it to Lake Ontario!
The rest of our ride to the campground was quiet and relaxing. We continued an ongoing discussion of when best to change gears, and what our favored cadences are. We sang songs and saw an owl, a turtle, more groundhogs, lots of rabbits, and just as we were entering the Hamlin Beach State Park, a deer. We set up camp, took a shower and cooked dinner. 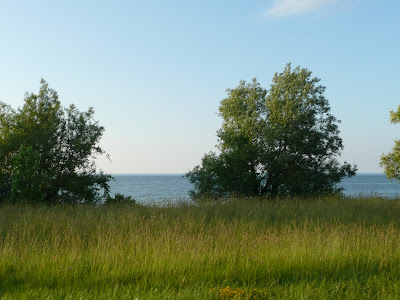 We had a very beautiful ride along the lake to our campground for the night.
Dinner this night was minimalistic, but tasty: pasta, cheese, carrot, and some spices. We wished that we had gotten some juice at a store while we were in a town that had that sort of thing. That night, we made it a goal to improve upon our habit of saying, “oh, there will be another store a little bit further along; let's not stop now to get that juice we will so desperately want later when we don't have any.” Because sometimes, later, there is no store. And no juice. And that is sad. 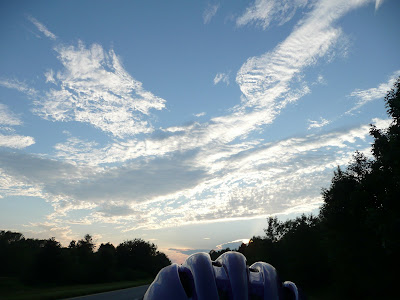