Brett woke up first this morning, around 7:30. He listened to the scouts dismantle tents while he wrote down some notes on the computer. Jenny continued to sleep a little bit longer and when she woke up we listened to some music from the computer while we took down the tent and packed up camp.

We were back in the U.S.A., and we knew generally which way we wanted to go (west), but we were also map-less at the moment. It had been raining and dark when we crossed the bridge and we hadn't gotten a chance to find a map. As we were filling up our water bottles, a fellow camper, a friendly lady named Audrey, asked us about our bike and our trip and went to get a map for us from her camper. When she realized we were heading all the way up to the Mackinac Bridge, she said we could keep it.

We thanked her and started gazing and planning, and pretty soon she brought back her daughter and another member of her family, and she told us how she has pictures of her father working on the Mackinac Bridge as it was being built. She had stories of how he was on the bridge when a plane flew under it. We had been considering the ferry across Lake Michigan, too, but after hearing all the stories about the bridge (and doing a little bit of time estimation), we decided we really wanted to go see it and the Upper Peninsula. 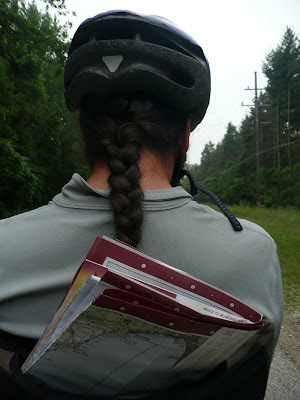 Yay! We have a map!
Back on the road with a map of Michigan in hand, we felt like we were one step ahead of a rain storm, and we biked quickly. We were following the coast of Lake Huron on Route 25, looking for a place to eat breakfast or brunch. Before we found a meal, though, we found a local donut shop! Everything looked so good and it was hard to decide what to get. Brett chose an apple-filled donut, while Jenny picked a cream-filled donut. Jenny's was amazing, and it was gone before Brett had a chance to try it. 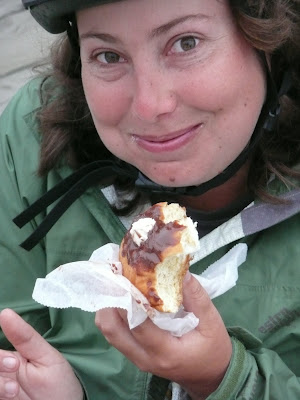 Jenny and her amazing cream-filled donut.
As we hit the outskirts of Lexington, the rain seemed about to pour down on us, so we turned back a half mile to take shelter in a cafe. We bought some food there, and did some writing on the computer while we waited out the storm. We also caught up with Spartan who we hadn't spoken to since rode with us on Day 1. 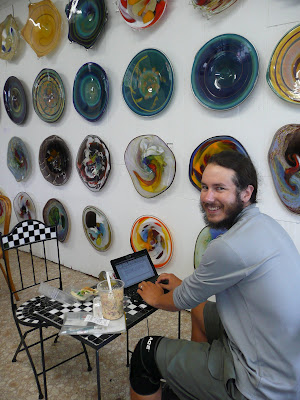 Brett takes a turn writing the blog entries.
Around noon the rain stopped, our bike was dry, and the cafe was closing, so we pedaled on, feeling lucky. We made it into the center of Lexington and spotted what appeared to be the perfect place to post things on the blog: iCraze, A Whimsical Cafe. It had a great Internet connection, plugs, and what looked like good food. We weren't hungry, having just eaten, but we bought some juice and stayed a while. While we were working happily on the computer, reading comments and uploading photos, it started pouring again, so we stayed where we were and bought some chili. 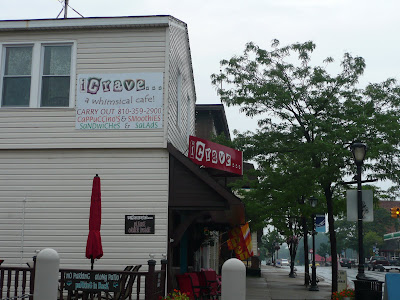 If we lived around here, we would come here often! 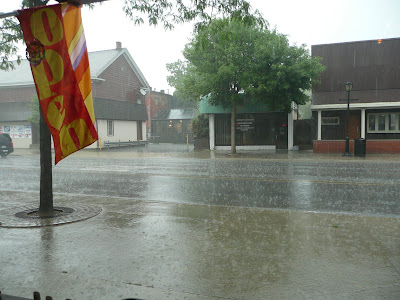 It rained so much today, but only in big downpours.
We were in the cafe, nice and dry.
We ended up staying through yet another rainstorm, and the owner struck up a conversation with us. She was really interested in our trip, and it was interesting talking with her about the Great Lakes, the economy of the area, and her cafe. She even gave us some samples of cake to try!! They were both delicious, but the coconut cream one was amazing!

Finally, we left when it was no longer raining. We were headed for Sandusky and had scouted out two motels where we could stay. We headed north a bit further on Route 25, then turned west. All along Route 25 we cruised, going so fast on the smooth, flat road. We slowed down a bit when we turned west, but were still moving. 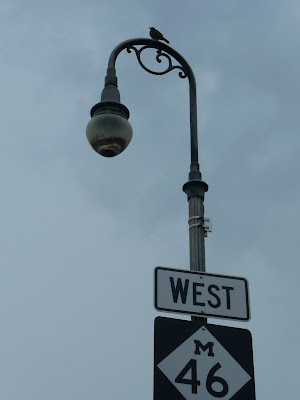 Looming clouds as we turned west toward Sandusky.
Note: Brett did not know he was being recorded. Cute, though, huh?
However, the rain finally caught up with us. We were watching the black clouds approach, and then the sky let loose. We continued riding, listening to the occasional thunder to gauge how far away the lightning was. We get soaked, absolutely soaked. Down one hill, in the pouring rain, we started laughing at the ridiculousness of it all. And we couldn't stop laughing. Jenny kept yelling that she was “drownding,” between peals of laughter. Brett was squinting with only one eye open trying to see the road, and laughing hysterically. At the bottom of the hill, we pulled over and got the laughter out of our system, and the rained lessened, too. 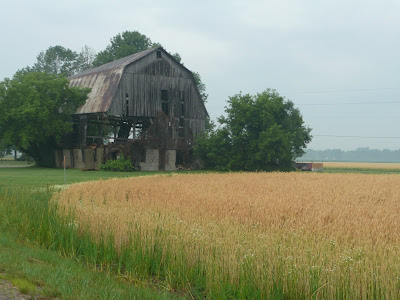 There weren't that many memorable things on this stretch, but there were a few pretty views, including this dilapidated barn.
Compared to that, the rest of the ride into Sandusky was boring. We picked the motel that had a bicyclist discount, brought our wet stuff inside to dry out somewhat, took a shower and Brett cooked some dinner while Jenny worked on things from back home and on the computer some more. It felt really good to have a big bed to spread out on, in a dry room, out of the rain. 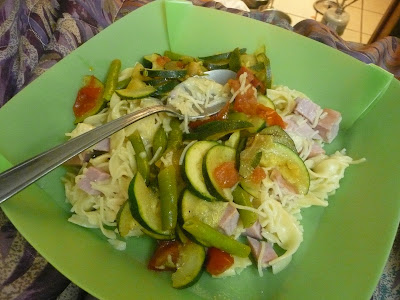 Our yummy dinner: noodles, ham, tomato, zucchini, green beans, and cheese. Brett cooked it on our little stove in the bathroom. 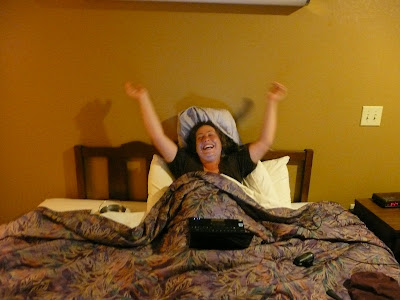 A very joyful Jenny, loving the comfy bed and the dry everything.
Posted by Jenny at Sunday, June 27, 2010