Leaving Ithaca well-rested, we were disappointed to be riding in a 60-degree drizzly rain. We made the best of it and at least it wasn't pouring. Jenny grumbled that her legs were cold. Brett's knees hurt a little at first, but when they warmed up they seemed to be fine. Once in a while he would notice a twinge, but proper gearing and refraining from pushing too hard kept them in good shape the rest of the day. 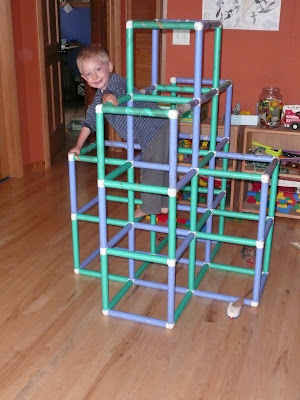 Jem shows off his climbing skills after breakfast.
We left by 9:30, after breakfast with our hosts, and made our way north through the fairly rural area between the lakes of Seneca and Cayuga. We found a decent place to eat a meal and get much-desired hot chocolates. A tuna melt and a bacon cheeseburger later, we moved on. 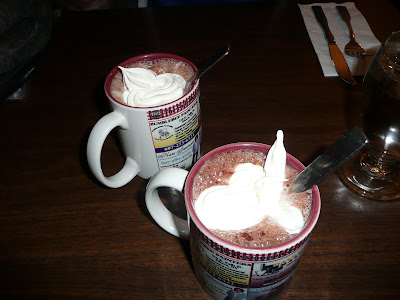 These two hot chocolates were EXACTLY what we wanted!
By the side of the road we saw two fawns. Surely this isn't a terribly uncommon sight for folks around these parts, but to us it's a rarity and the first on this trip. They were so cute, but they bounded away before Jenny could get the camera out of its carrying pouch conveniently located on the back of Brett's seat. 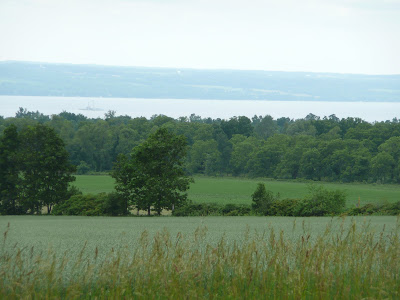 Jenny didn't snap a photo of the fawns, but did get this beautiful shot.
Much of our ride looked like this.
As we gained elevation going west between the lakes (on Route 96A), we came upon a really cute little roadside stand. They had eggs (only $1.40/dozen!) and homemade baked goods including bread and cookies. We chose to get a frosted cinnamon raisin bread. It was only $1.37! What a deal! It was so good. 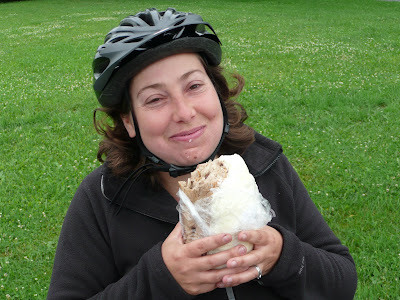 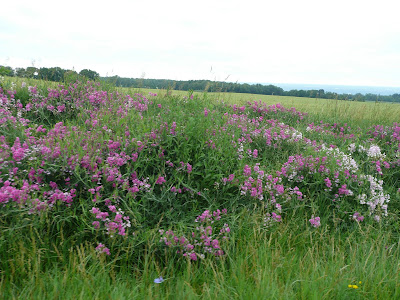 We passed lots of sweet peas on the side of the road. They remind Jenny of Grandma Boas. They were one of Grandma's favorite flowers. 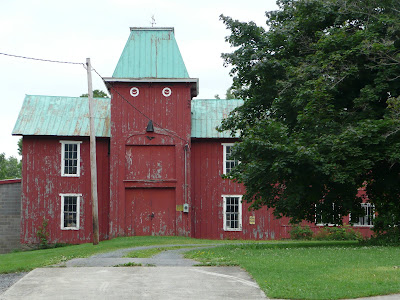 If barns could talk...
It stopped raining and warmed up in the early afternoon as we started our descent down to Seneca Lake. We passed many fields of grain, farms with work horses and beautiful vineyards. Just passed the small town of Lodi, we weren't sure which way to go and headed down a LONG hill, putting us right down by the lake. At the bottom of the hill, we saw the following two signs: “Dead End” and “No Outlet”. Panic! Panic! We did not want to climb back up any part of that huge and steep hill! We decided to keep going and hope for something like a miracle. Maybe a backyard to cut through?

What we found delighted us to no end. Where the road ended at a gate, a paved path right alongside the water continued in the direction we wanted to go! It turns out, this is a back entrance to Sampson State Park, which we had planned to go through anyway. So, for several miles, we had no traffic, nobody but the deer for company, and beautiful scenery. Eventually we found the offices of the park, used the bathrooms, and continued on another disused road out of the park. 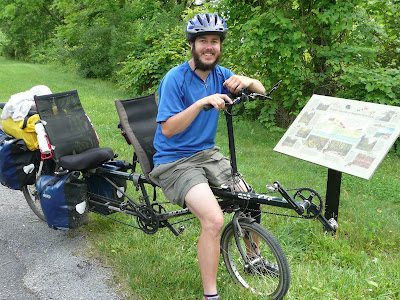 We had our own private path for a few miles.
The rest of our ride to Geneva was beautiful. We rode mostly along the lake, observing all the vacation homes, and then up a bit into wine country. We passed three or four vineyards and wineries, including the winery that our host in Geneva works at. Arriving in Geneva center around 5:30, we found our hosts in a beautiful house a couple blocks from the center of town. 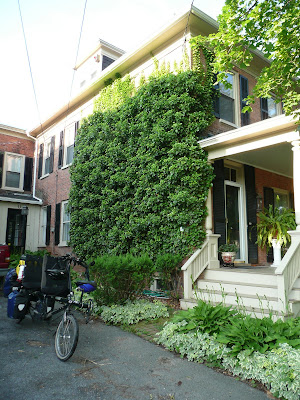 Victor and Jenna are housesitting here and also plan to trim the ivy and build a compost pile for the owner.
This was our second warmshowers.org experience, and the first for Jenna and Victor, who so kindly took us in. Jenna and Victor are both graduates of Geneva College and have been housesitting for area professors since then. The house they are currently taking care of was gorgeous and large. We were lucky to have our own bedroom and bathroom. After we got a tour of the house, did some stretching, and took showers, the four of us walked to the grocery store to buy fixings for homemade pizza. The pizza and watermelon Jenny got for a treat were delicious. Thanks you two! We made grilled pizza for dinner, but the watermelon treat couldn't wait for after the meal! 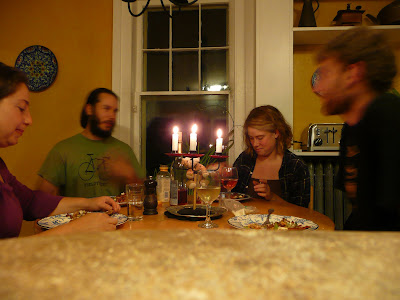 Dinner by candlelight.
We leave you with this last image, words of wisdom from the public safety complex in one of the towns we passed through today: 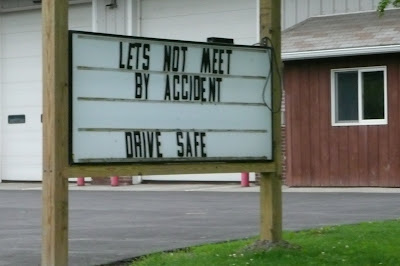