We woke up in a huge bed. Indoors. We cleaned up the room, and then went looking for the free continental breakfast saw listed on the website of the motel. Somehow, either we were mistaken or their website was wrong, and there was no breakfast provided. Wanh-waah. Instead, we loaded the Screamer up and pedaled across the street to a “Big Boy” restaurant. 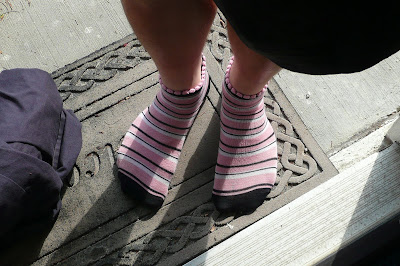 Brett's feet, Jenny's last pair of clean socks.
Two words: Laundry Day.
As strange as we felt to be eating at a Big Boy restaurant, it worked out pretty well. They had wireless Internet, we enjoyed the breakfast buffet for a pretty cheap price, and then wrote and posted a blog entry. We've been trying hard to catch up, and yesterday we got all the photos loaded for several posts-to-be, but we still have several days to write.

We didn't leave Big Boy until about 11:30, but we felt the writing and posting were well worth the time. We put on sunscreen, and headed west again along Route 46. Since there was so much of a headwind, and a bunch of traffic, we headed north a few miles outside of town. For whatever reasons, we couldn't find a groove, couldn't make any real headway, and couldn't stop laughing. We were telling each other to stop, because our sides hurt from laughing so much. 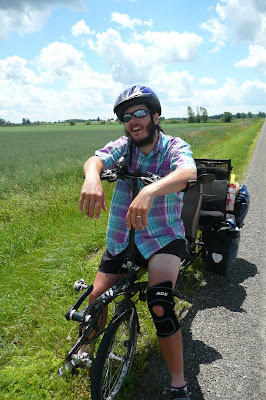 The wind was so strong and we were getting pretty silly.
Eventually, we calmed down and started on our way again, but it was still super slow going. We turned west after a few trucks went by in the opposite direction and brought with them a mini sandstorm, stinging our faces and arms. We found a small picnic area and playground, so we stopped under a pavilion. We were sick of facing the stiff headwind and making such slow progress. After quite a while of snacking, drinking juice, and writing part of a blog entry, we tried again. 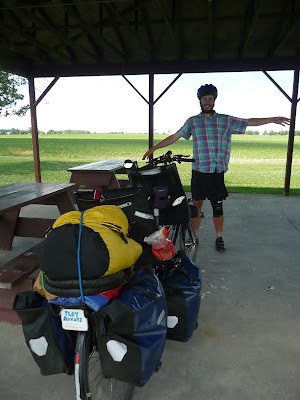 The wind was so strong, Brett was almost blown away! 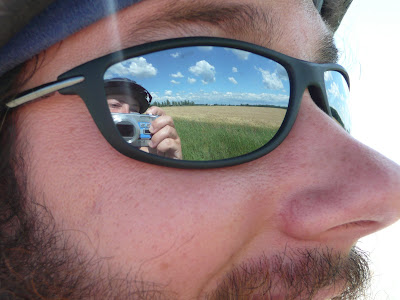 The wind in the wheat fields.
Although we were still slow, we could feel the potential for some good riding. We hit a store and bought chocolate milk, a huge Italian sub, a gallon of water (because the local water tasted bad), and a banana. We drank the chocolate milk, and headed out again. Almost immediately, we felt a difference. We started singing loudly, pedaling a little harder, and making noticeable progress across the very flat open areas. The wind was still against us, but we no longer cared as much. 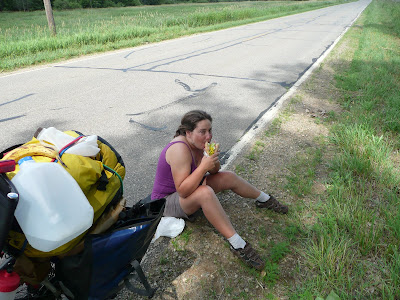 Jenny continued to navigate our way across the grid of roads towards Caro. We wanted to stop there and do laundry. It took a while to get there, and a little longer than we thought, but we found a laundromat. Their last load was at 6:30, and it was exactly 6:30. They were kind and let us quickly gather our dirty clothes and sheets and throw them in a washer.

A nice local bicyclist stopped by while we were waiting for our laundry. His curiosity was piqued when he saw our bike, and he chatted with us about the area, and gave us some hope there might be a campground in Munger. He gave us directions out of Caro, and went off on his 20-mile ride before it got dark. The laundromat closed at 8:00, so we gathered our mostly dry laundry and packed up, excited to have clean sheets to sleep on and clean clothes to ride in. This was only the second time in the three weeks of the trip that we did laundry, so you can understand our excitement.

Our navigation out of Caro left something to be desired, but it didn't take too long before we were on the open road again, headed west. The conditions were almost perfect for riding: not too hot, not too cold, not too windy (though there was a consistent headwind as there has been for some time), and we felt great after our rest at the laundromat. If if weren't for the oncoming dusk, we felt we could have ridden forever. 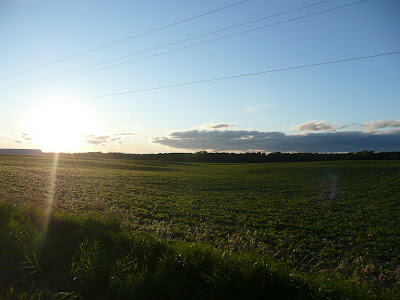 We have seen some amazing sun sets on our trip.
But, as dusk approached, and a check of a phone book didn't show any mention of a campground in Munger or anywhere else we were headed that night, we decided we should start asking along the way. We started by looking for folks who were outside so we wouldn't have to knock on any doors. Our first candidate was on the phone, so we passed on by. Now it was starting to get dark, although the sunset in the western sky that we were riding toward was still splendid. We saw two figures watching over a fire barrel, and we pulled in the drive to ask if we could camp there.

As we biked closer and explained our situation, the two men offered us a place to camp for the night. We chatted a bit, and they kindly offered us drinks, and a place to fill up water bottles. They were from Texas, but spend the warmer months here in Michigan for the work. We also met their friendly dog, who barked at us a lot, but was very sweet and friendly. The place we picked out to set up our tent was very flat and the view of the sky was spectacular. The wind had picked up a good deal, and we enjoyed the sounds as we cooked dinner in the vestibule of the tent. We made a delicious concoction of noodles, cheese, green beans, avocado, olive oil and spices. Then we went to bed, still listening to the peaceful sound of the constant wind in the grass. 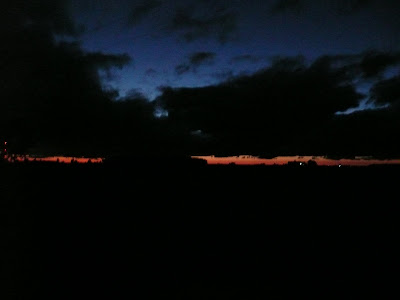 It was dark when we finally got all set up for the night.
Posted by Jenny at Monday, June 28, 2010