We did it! We put down our busy lives and biked away from Northampton, MA. We had a little entourage of friends accompanying us when we pulled away from Franklin St. at 7:56 A.M.. Guy and Selena turned back after the first significant hill out of town because they both had appointments to keep, but it was so much fun to have them along for a few miles. Spartan continued on and biked through a few towns with us (17 miles in total). When he too parted with us, it was both sad and exciting. We were finally on our own, but it was daunting to do this huge thing (bike across the country) alone. 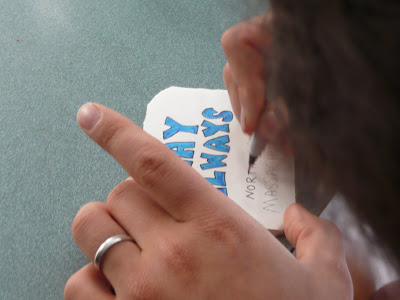 Brett puts the finishing touches on our homemade "license plate" for the back of our bike.
We had lunch today at The Old Creamery cafe. They had yummy food to eat, and Jenny had been curious to go into the establishment for quite some time. We took a piece of quiche for later. When later came, that ham onion portobello quiche was the best thing! 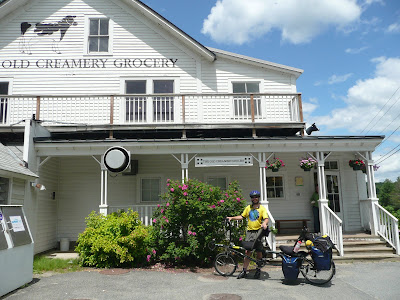 What a lovely place to stop for lunch!
Soon after we left the cafe, we noticed the winds picking up and the dark clouds rolling in. We held out until it started to pour, and then we dug out our raincoats for their first use. The rain was pretty cold, and the winds in that first storm were gusty, but we made it through and it stopped after a little while. We had more rain a little later and sprinkles on and off all day, but really the weather was beautiful. We kept remarking on the stunning clouds, and there was much sun and blue sky. 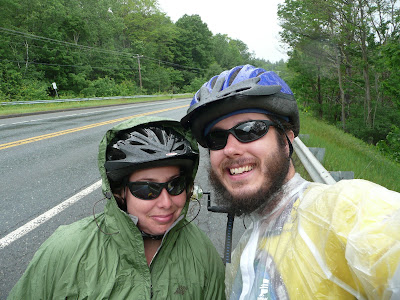 Wet, but happy.
We have heard from several sources that the Berkshires are perhaps the hardest, steepest, hilliest day of the trip across the country. If that's true, good, because those are monster hills. To make it clear, we pedaled upwards for miles at a time at least three separate times today. Some of those times we would have mild inclines to break our ascent, but nothing to really give us a break. We rarely worried about being able to pedal up the hills because we have low gearing on the bike, but the hills really did take a toll on our bodies. Tonight we are sore, and we knew from before the half-way point that it was going to be a tiring day. We just hope that tomorrow won't be significantly affected by the exhaustion of tonight. 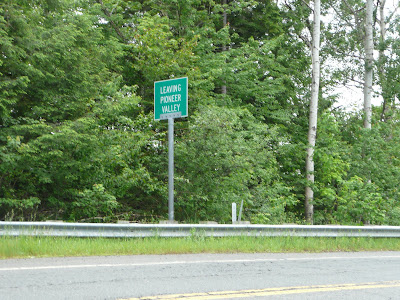 We made it out of the Pioneer Valley!
One of the best things about traveling by bicycle as opposed to automobile is observing wildlife from the road. We heard woodpeckers we would never have heard in a car. We saw numerous pretty wildflowers. We saw a fox (with cubs!) just hanging around in a field. We were so inspired by seeing the fox, by seeing something that you can only see if you are outside doing something very different than what we tend to do in our normal, everyday lives. 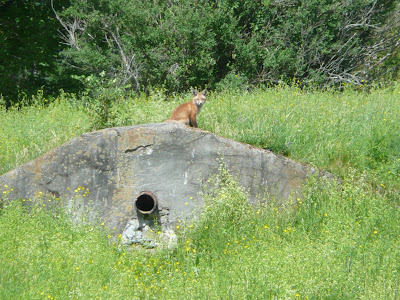 This mama fox was playing with her cubs on the rock when we noticed them. The cubs stayed out of sight once they noticed us watching them. What a treat to see!
Not that today was perfect. At about 4:30, Brett noticed a different sound coming from the front wheel. The front tire had blown a hole in its sidewall for an inch along the rim. Although the tube was seemingly intact, it wouldn't stay so for long if we didn't take action. Brett deflated the tire and with the help of Bill H., a super kind fellow bicyclist, we put some cardboard between the tube and the tire's sidewall. With a call to the nearest bike shop, we were on our way pick up a new tire. Tom, the proprietor of Ordinary Cycles in Pittsfield, MA was generous with his time and knowledge, and it was fascinating to hear his tales. 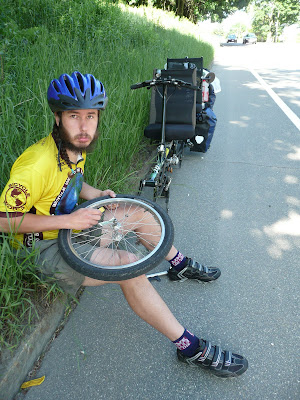 Sad Brett puts a temporary fix on our broken tire.


Since it was 6:15 by the time we left Ordinary Cycles, we called to let our gracious host know we would be a good bit longer. We found Robert R. (and his wife who we did not get to meet) through Warmshowers.org and he was a perfect host. He let us take showers (even setting out towels for us before we arrived), cooked us a yummy dinner, helped us look at maps for tomorrow, and let us do our own thing. Thank you! 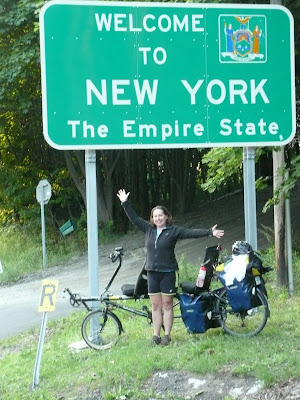 So excited to get to New York! 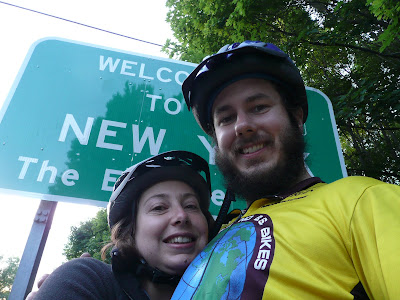 Yay!
Our main goal for the day was accomplished: we made it out of Massachusetts and into New York! We stayed Night 1 in New Lebanon, NY. We hope to spend Night 2 in Thompson Lake State Park.

Thanks to all who helped today turn out so well!
Posted by Brett at Tuesday, June 08, 2010