Hoping for a drier day, we were excited to wake up to sunshine. We packed away the tent and gear and Dennis let us look at his maps to our hearts' content. He even gave us a map of New York. We planned our route, and then left at 9:05, earlier than yesterday. Making decent progress and enjoying the better weather, we navigated our way through a few turns on small state highways, leaving behind the towns of East Berne, Berne, and West Berne. 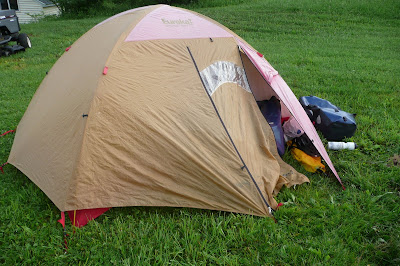 Our first night of camping, and our good ol' tent worked great! 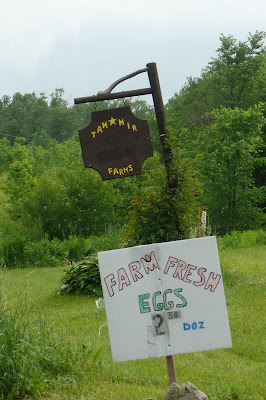 Dennis and Tammy's farm where we spent the night. 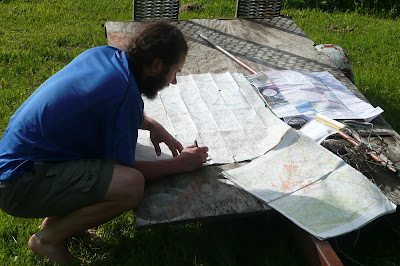 Looking at maps.
For brunch, we stopped and cooked rice and chicken masala (in precooked packages that Jenny bought at Deals & Steals before we left) at a cute little park along a river. The river flowed down over many little falls, and the rocks were full of fossils. It was a really neat place to spend a little bit of time. Before we left, we hard boiled three of the eggs that Dennis gave us, planning to make scrambled eggs with the others later and snack on the hard boiled ones. 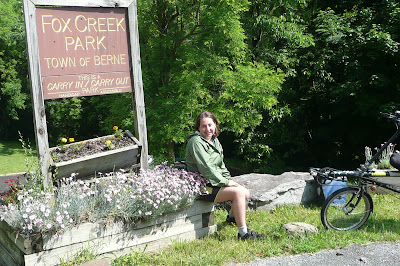 A nice place to cook and eat brunch. 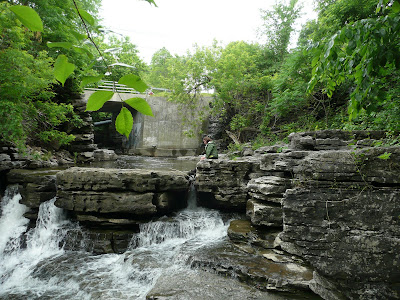 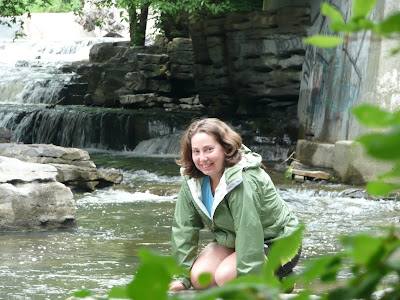 Cool waterfalls!
Not long after brunch, though, the rain returned. It rained most of the middle of the day, including a torrential downpour while we were flying down a hill. We were about to hide under the bridge at the bottom when the rain slackened enough that we weren't wincing. We were pretty annoyed with the rain and our patience for it has certainly decreased to the point of complaining about it. “It just keeps raining” was a phrase commonly used by Jenny.

We were soaked when we stopped at the Carrot Barn, a flower nursery/farm/store/deli. We felt a little bad going in all wet, but no one seemed to mind. We got a lot of comments like, “Staying dry out there?” (What can you say to that?) We bought cheese and broccoli to go with the scrambled eggs later, a bottle of lemonade to drink on the spot, and a scrumptious white chocolate raspberry cupcake. That cupcake was exactly what we wanted: not too sweet, great flavors, good cupcake and gone before we got back on the bike. 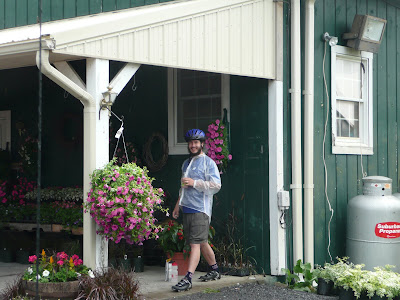 Enjoying the treats at the Carrot Barn.
Just after the painful downpour, we got another flat tire. For the third day in a row, we were delayed by a mechanical! Hopefully this isn't a trend that continues. This time, the problem was the previously mentioned gash in the rear tire tread. Either something had gotten in and pierced the tube, or the gash is large enough for the tube to sort of bubble out of it enough to give itself a small hole. To fix our problem, we first patched the tube with our kit, and then we decided to use a dollar bill for reinforcement between the tire and the tube. This took a while and we were off the road for a good hour or more. We had 3 people stop and ask if we needed any help, including Boaz, a friendly guy who was intrigued by our bike and snapped a photo to show his friends. 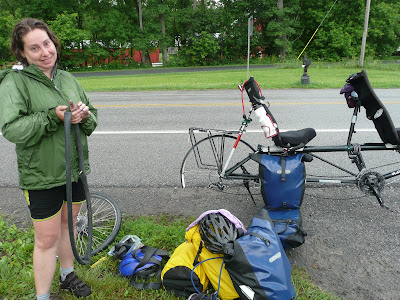 Waiting for the patch to be ready.
While we fixed the tire, the rain let up and we got some nice sun again, and in fact it was sunny most of the rest of the day. We turned west again at Route 20 and followed that for the rest of the day. It was a lot of up and down, up and down, because the valleys run north to south while Rte. 20 heads east to west. Interestingly, Rte. 20 goes all the way across the country, though we won't be taking it the whole way. It's a nice road for us in this region (besides the hills) because it has two full lanes in each direction plus a good shoulder to ride on. There really isn't much traffic, but what traffic there is tends to pull over to the passing lane almost every time, including the big trucks. 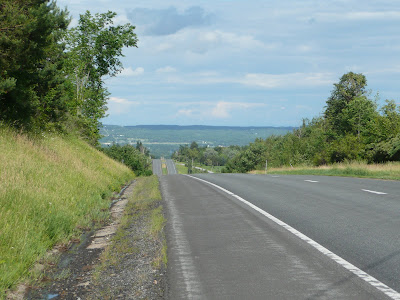 This is what our afternoon on Route 20 looked like:
pretty, but lots of ups and downs.
We stopped for some encouragement from an ice cream shop just outside Sharon Springs, NY. We enjoyed a huge banana split (though we got a bit chilled from it too). We asked about accommodations in the area and were told there was a motel in Sharon Springs, which excited us. We love the idea of camping most nights, but this night we just really wanted to find a place nearby, with Internet, and warm showers. We found the hotel, showered, plugged in our electronics to charge, and were so tired we went to bed without any more dinner than the banana split (it WAS big).

Our goals for tomorrow and the following days are to be more aware and proactive about eating good meals and drinking enough water. We aren't far off, but we can do better. 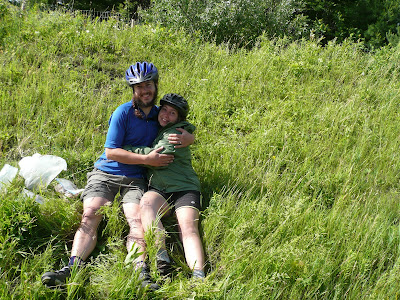