We got a bit of a late start, but a good breakfast helped our mood. Leaving the campground, we couldn't stop giggling and laughing because we were so glad to be away from that place. It wasn't really that bad, but it just wasn't a very happy place. 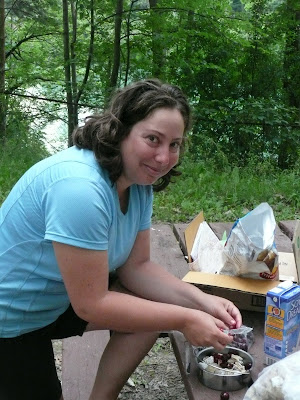 Breakfast = cherries, frosted shredded wheat and soy milk.
Grey skies overhead brought cheers after the previous day's burning rays. We were excited to be in Canada. We kept seeing little things around us that confirmed we had woken up in a different country. The post office boxes were red instead of blue, the road signs were cuter, some signs were in French, and some of the people's accents were significantly different. 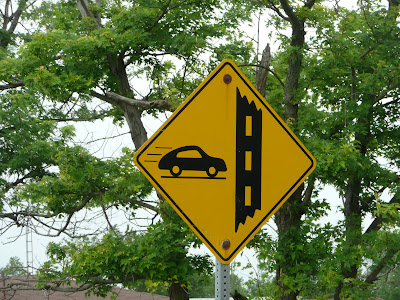 Isn't this sign cute?
We went through a tunnel in the morning on our way southwest from the village of Montrose. The tunnel wasn't long, and it was downhill a bit so it went quickly enough, but it was still a bit nerve-wracking. The terrain in the morning wasn't particularly memorable, other than the tunnel. The grey skies finally turned into rain a little after the tunnel, and continued lightly until we stopped for a bathroom break south of Welland. We are about to bike through our first tunnel! 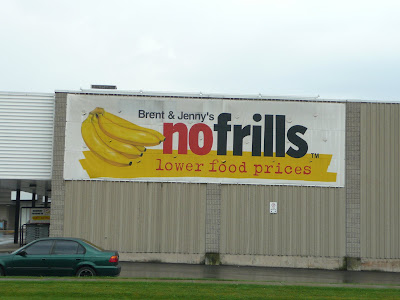 This food store spelled Brett's name wrong.
A nice fellow who admired our bike told Jenny there was a bike path just across the river that followed the canal south. We crossed the bridge and indeed there was a beautiful path right along the canal that seems to be only used by rowing teams in that northern section. As we followed the path south, the canal use changed to more industrial use, but the path was still beautifully paved and quiet. 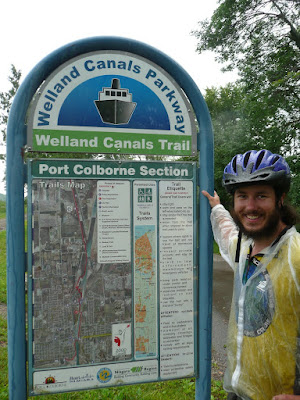 It's always fun to find a bike path. 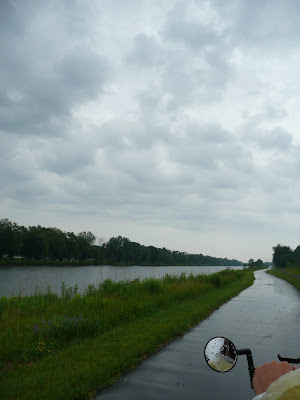 We had a great smooth ride for miles along the canal.
We took a guess at where to get off the path most efficiently in Port Colborne in order to head west. Our guess put us out exactly where we hoped, and we started riding west on Route 3. Unfortunately, Route 3 is very busy and there isn't much shoulder. While we were stopped for a water break, a man pulled up and said he was a local cyclist. He highly recommended that we leave Route 3 and follow the coastal roads because they are quieter and prettier. We thanked him, and just as we were about to follow his advice, another two touring cyclists pulled up to say 'hello.' They were out for ten days, circling Lake Erie. It was fun to meet others touring by bike.

The roads along the shore were great. It was windy, but the rain was gone and we were happy for views of the second Great Lake we'd met. We stopped in cooked lunch, even though it was difficult to get the stove sheltered from the wind enough for the flame to heat the pan right above it. We ate a delightful mix of six eggs, cheese, pepper, tomato and zucchini. 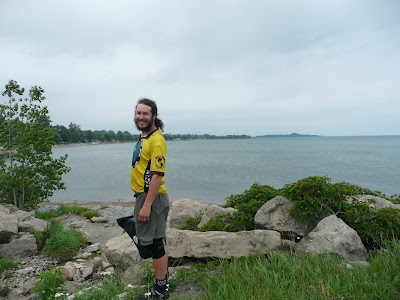 We cooked a yummy lunch on the rocks along Lake Erie.
We lubed the chain that afternoon, because it was audibly complaining, and that seemed to help. Our bike could use a tune-up and a cleaning, but it's holding up really well! We're so happy with our choice of equipment from the bike on down to the smaller things like panniers, shoes, and sunglasses. We were also happy seeing that Ontario has some wind turbines along the north shore of Lake Erie. We love the idea of wind power. 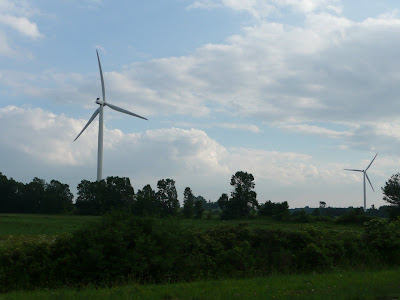 Wind turbines dotted the landscape along the lake.
We've been wanting to get on a different schedule for our days. We would love to start earlier and finish riding earlier in the day. To make this happen, we decided to pick Rock Point Provincial Park as our destination rather than try to push on and make it all the way to Selkirk Provincial Park. We ate dinner at a little golf course restaurant a few miles shy of Rock Point. This also helped make our evening shorter because we didn't have to cook and clean up after dinner.

It was tough for us to stop before we were out of energy, but it was absolutely the right thing to do. Rock Point had a stunningly beautiful beach, really nice grassy campsites, and the best showers we've encountered to this point. On the beach in the evening, we got to see a peaceful and gorgeous sunset to wrap up our day. 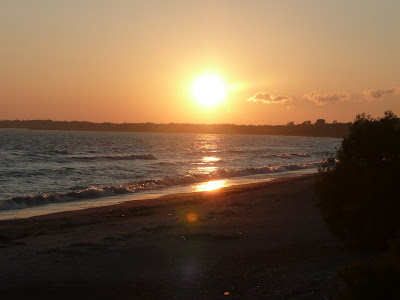 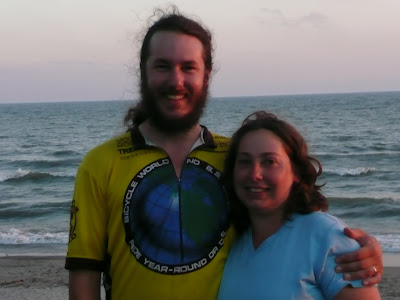 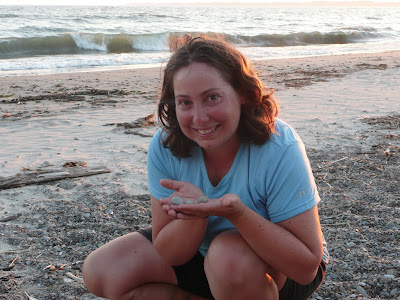 Jenny picks out a few small stones to take home as keepsakes.
Posted by Jenny at Tuesday, June 22, 2010