We woke up in the beautiful field, and packed up slowly. It was quite windy, but that was nothing new. Although we were a little bit grouchy, our strong legs gobbled up the first few miles. We didn't have much for food, so we were eagerly hoping that Munger would have something. We stopped at the first place that we saw, and although it looked much like all the other roadside diners, it surprised us. 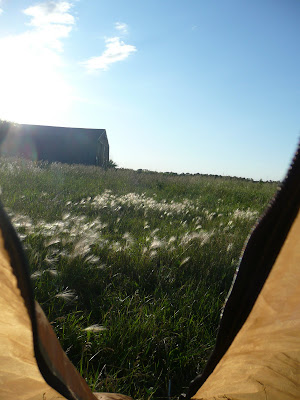 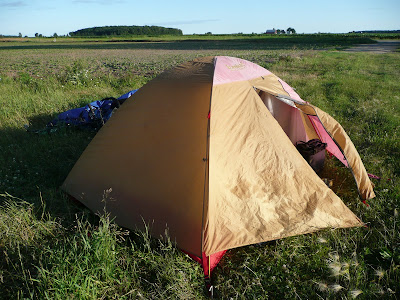 Super views in the morning outside the tent.
At the The Tool Shed, we found Internet, excellent burgers, friendly staff, and a decent atmosphere. We lost our grouchiness by the time we had eaten. We spent about an hour after we were finished with our meal looking at maps and using the Internet to answer email and upload pictures. The friendly staff gave us great directions for small roads to take into the center of Bay City, where we were headed to Bay Vac & Pedal, the recommended bike shop in town. 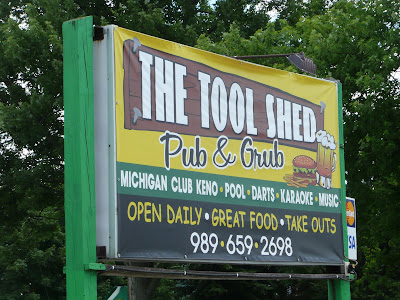 We soon found our way into the city and after going one too many bridges too far, backtracked and crossed the correct bridge and found our destination. The folks at the bike shop were very helpful, and Bill got right to work on our bike, despite having a busy schedule. The bike had been holding up admirably, but it was starting to skip gears here and there, and we had neglected our cleaning duties. We hadn't had any work done on the bike since we bought it, so we were excited to have the drive train cleaned and and the shifting and brakes adjusted. They sold us a new kickstand, too, because our old one had bent just a day before. Bill also took the old one in the shop and bent it back into shape, so we took that with us just in case. 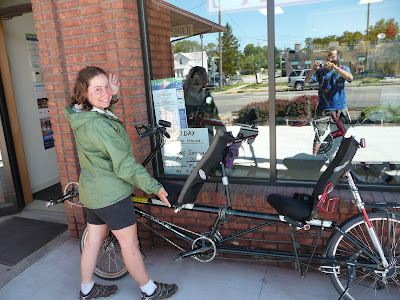 Jenny shows off our newly tuned up and cleaned bike!

We also purchased a new water bottle, because one of ours had gone bad after a hot day and some juice. Brett was a little sad, because he had been given that water bottle by Marie of Pedal People on his first training ride, and it had originally come from Basically Bicycles in Turners Falls (a shop that sells Rans Screamers). 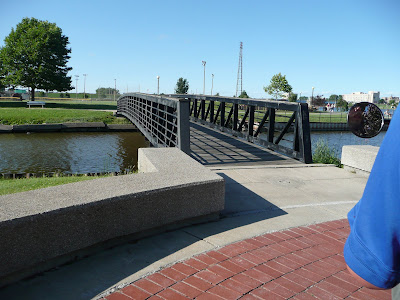 We followed this pretty bike path along the water and out of Bay City.
With our newly clean bike and our new equipment, we walked a block down the street to an all-you-can-eat pizza and salad buffet for our second meal of the day (around 5:00). We stuffed ourselves, and then headed north. We followed their bike path out of town, even though the roads may have been faster, because it was pretty along the banks of the river for a while. Eventually, the path ducked into the pretty woods, and we started cruising. It wasn't long before we came to the Bay City State Park, our first option for the night. It looked beautiful, but we felt so good riding and the sun hadn't even set yet, that we decided to push on to the next option, a county park in Pinconning. For that, we had to head west, then north, then back east. On the map we spotted a bike path heading north/south a bit east of the main road north (Route 13/Route 23), but when we went to look for it, we never found it. Perhaps it's still railroad tracks. Anyway, we were getting tired now, and annoyed at the phantom bike path, but we did finally make it to Pinconning Park. 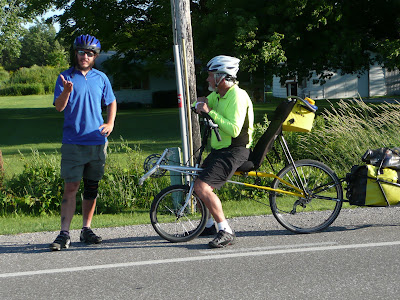 Just after we passed Bay City State Park, we met another Rans recumbent rider, biking the other way! He started in Seattle and was almost to his end destination of Rochester, NY.
We had tried to stop for dinner and breakfast supplies at a supermarket in the center of Pinconning, but they were closing as we got there. We had a little bit of food, and we weren't very hungry, so we just headed to the park. Amazingly, the family across from us in the campground offered us dinner of chicken, baked potatoes, and beans, with s'mores for dessert. They were so friendly and fun to talk to! They also said we should come over and eat breakfast with them in the morning. 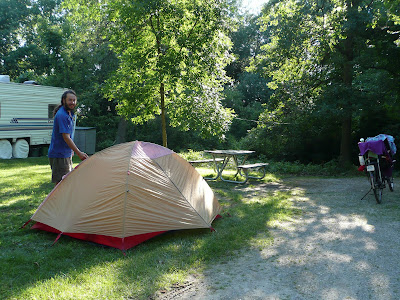 Brett finishes setting up the tent.
We took a shower after dinner, and went to bed exhausted but happy. We even got to read fun and inspiring comments on the blog, because this park had Internet!
Posted by Jenny at Tuesday, June 29, 2010