We got off to a late start today, but still managed to get quite a bit of biking in. Brett cooked a delicious breakfast of eggs with onion, garlic, and cheese, plus toast and orange juice while Jenny worked on packing up. After breakfast we spent a while on the Internet posting Day 1 and didn't end up pulling out of the driveway until 9:55 A.M. as Robert and Theresa waved us off. What a pleasure to have met them.

It didn't take us long to see more wildlife. Today we saw lots of birds, and not just the run-of-the-mill varieties. We saw a cedar waxwing, an oriole chasing a crow, a great blue heron flying higher than usual, and many goldfinches.

It also didn't take us long to ride into more of the storm front, and in fact we were riding wet and in our raincoats much of the day. Once you are wet, there's not much you can do as a cyclist, and so we just keep pedaling through the rain. Sometimes it's unpleasant, once in a while it's actually fun or pleasant, but mostly it's just 'enh'. We weren't happy that it rained both of our first two days, but we know it will even out over the long weeks/months ahead.

Despite the late start, we made good time in the morning, mostly because we were headed downhill in general (to the Hudson River). We crossed the Hudson via the pedestrian walkway on the Dunn Memorial Bridge. We biked the whole thing, even the steep incline down after the sign that said not to. The drum brake on our bike came in handy there. 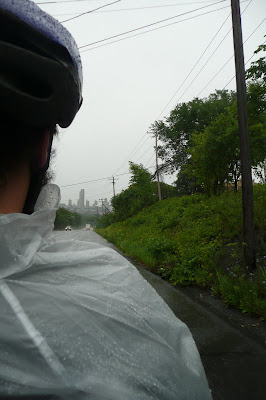 Riding down the hill into Albany, NY. 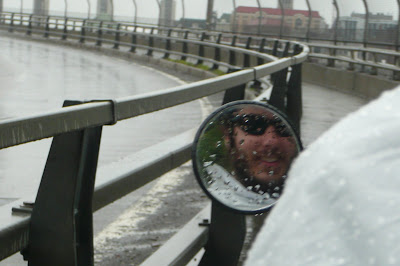 We are about to cross the bridge over the Hudson River. 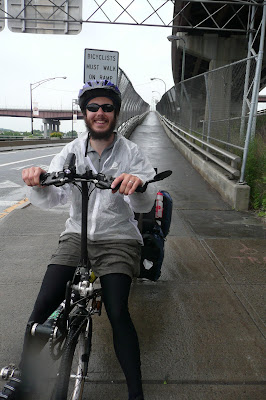 We made it!
It was kind of fun to ride through Albany, New York's capital city. We didn't take the main roads, though. We took small ones, including one by the waterfront that ended at the train tracks and started again on the other side. A car would have no choice but to go around. A bicycle, even one as large as ours has more options! We crossed the tracks with our bike and continued on. One street we turned on to was ridiculously steep. We made it up after about 45 seconds of hard pedaling in our easiest gear, and were very proud of ourselves. We saw lots of poor folks, but almost all of them waved or smiled as we passed. We also saw some beautiful old apartment buildings that have been well cared for. 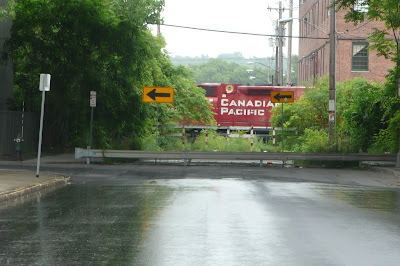 Not more than 2 minutes after we carried our bike over the rail tracks, we looked back and there was a train! It was going very slowly, but still, we were glad we crossed when we did.
Perhaps the best part of our day was stopping in a cafe on the outskirts of Albany called Perk Ups. It was a quiet shop, but it had tasty soup, yummy sandwiches, desserts, and Internet. We stayed in there a while, as the rain continued to fall (and not lightly). We caught up on our email and such, tried to get warm (as we were still wet, but not getting warm from pedaling), and just rested.

Just as we pulled away, though, we heard the tell-tale sound of a flat tire: PSSSsssssssssssssssss... This time it wasn't the front tire giving us trouble, but the back tire was totally flat. We both had much learning to do in changing it. We had (embarrassingly) never taken off the rear wheel on our Screamer before, so we took a lot longer than usual to get the wheel off and discover the problem (the tube was blown at the valve stem, though we also found a gash in the tire tread that might allow road debris to reach the inner tube), and a very long time figuring how to put the rear wheel back on after we put in a new tube. Despite the frustration of having mechanical problems two days in a row, we were able to work on fixing the problem and learn about the bike while still being really patient and nice to each other. 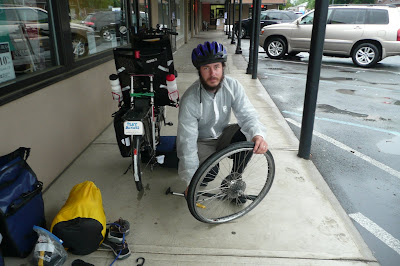 Fixing another flat tire. It took a long time.
Valuable skills were learned, but time was lost. The time was 6:15 and we were afraid we might not reach our destination (Thompson's Lake State Park) in time to check in, as the caretaker was leaving about 9:30 P.M. Also, one nice lady we spoke to told us we were going to “climb the mountain” on the road we had picked. It took us a LONG time to climb the mountain and it was dark by the time we thought we must surely be only a few miles from Thompson's Lake State Park. It was was also still raining (lightly, but still, our moral was fading because of it).

While still several miles away (we didn't know just how many), the park attendant drove by and said that he was leaving for the night, but that we were welcome to stay the night there anyway. We pedaled onwards through Thatcher State Park, but by now the darkness was complete and we were very tired. A few miles later, a nice man stopped and asked if we wanted a lift to the campground. He said he lived right near it, but we declined, thinking it would be only a few more minutes/miles. Of course, it took us close to another half hour to get a few more mile because of the hills. At that point, the man who had stopped before passed us again and turned into his driveway. As we were waving and passing, he got out of his car and yelled for us to stop, saying that he had something for us. He walked over and handed us a half dozen eggs! After talking with him for a few more minutes, we found out that our park was only a mile down the road, but he offered to let us camp in his backyard instead. That's what we did. Dennis was so nice. He helped us find a flat place to pitch our tent, gave us a light to use, and even ran out an extension cord from his garage so that we could charge our headlight.

We pitched the tent and set up our sleeping mats, snacked on some food and went to bed. By that time it was after 10 P.M. -- what a long day.
Posted by Jenny at Wednesday, June 09, 2010