Before we even got out of the tent this morning we had two conversations on Skype. It's really nice to have Internet right there. What can we say? We're addicted. Connecting with family and friends we miss is also important. That's one of the reasons this blog is dear to us.

Getting going can be tough, but at least once we make the decision to get up and on the road, it doesn't take us long to break camp. This morning would have been particularly quick, but we also wanted to set up the new bike computer we purchased yesterday while we were in Billings! Even that went pretty smoothly, though, and now we have a Schwinn bike computer wired and working, giving us all kinds of stats. It's really nice not to have to try to keep track of how long breaks are to estimate average speeds and such.

We would have used the bathrooms in the campground, but they were both locked, so we used the ones in the gas station/diner/”casino” instead. Then, after a quick snack, we turned our noses west. At first our favorite secondary road was easy to find, but then there was a turn where we couldn't tell which way was best to take. We ended up taking a road that went all the way to the next little town, Park City, so our decision worked out perfectly. We're getting closer to the mountains! 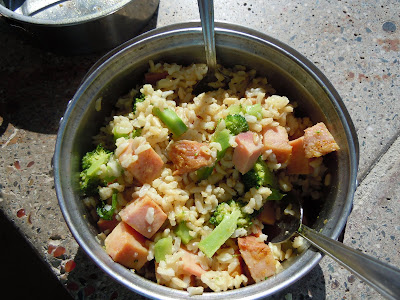 We stopped and cooked up a yummy brunch in a little park a few miles into the day.
Jenny was having trouble staying awake, and we were both in need of some shade, so we were thankful to find the shaded library lawn in Park City. We both took off our shoes, and Brett worked on writing while Jenny dozed. In a while, we both felt much better, and we continued on, following the directions of a local to the road that would parallel the big highway all the way to Columbus. Just before we turned west on that road, we bought a bag of ice and some potato chips. The ice got distributed into our water bottles, and the leftover ice went into a zip-lock bag for later. 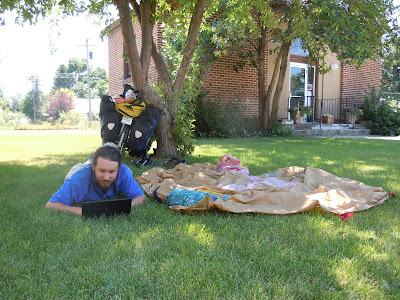 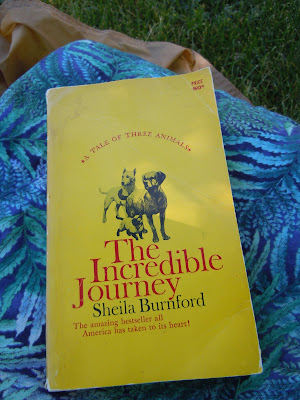 Jenny found this book in a box of free books on the library steps.
The afternoon was already upon us, and we had only biked thirteen miles or so, but we were still hopeful we'd make it to Greycliff Prairie Dog Town State Park before stopping for the night. We were back on our beloved Highway 10/Frontage Rd/”the old highway” so we could see the train tracks and river on our left, Route 94 on our right, and mountains ahead! We pushed a little harder than before, even in the hot sun, and started to make better time. We took fewer breaks (there was one at the top of a hill when we needed to transfer the pictures off the camera and onto the computer), and we were constantly remarking to each other on the amazing scenery. 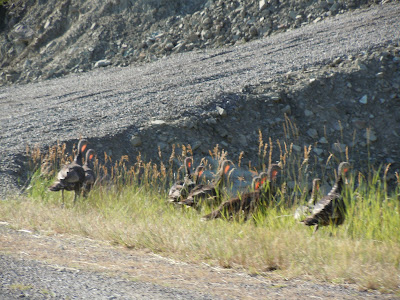 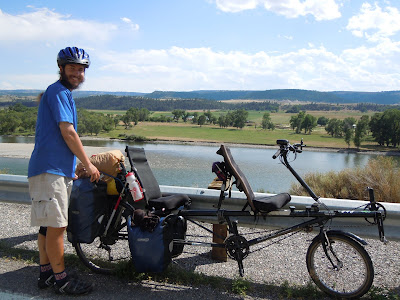 This is where we stopped to transfer photos from the camera to the computer. We also saw a bald eagle flying over the water!
Arriving in Columbus about 4:30 after a screaming downhill where we hit our top speed of the day, we were looking for a spot with Internet, and maybe a bite to eat. When nothing along Main St (that was open) had Internet, we decided to cook our own meal. Jenny cooked up the rest of the ham plus a can of black beans with garlic, broccoli, salt, cayenne, and sharp white cheddar cheese. YUM. The rain clouds were threatening, and sprinkled a few drops on us, but we didn't really get rained on today. We must have timed things just right, because the roads west of Columbus were wet with the rain they'd received earlier. 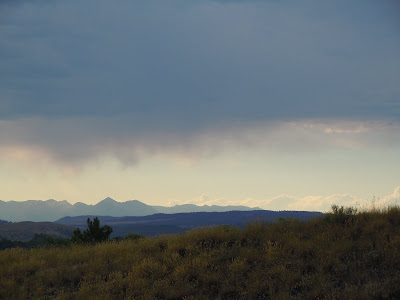 The sky was threatening rain as we neared Columbus.
On the way out of Columbus, we stopped at a children's lemonade stand. For a quarter, we bought a tiny little cup of sugary pink lemonade, just a sip for each of us, and then we answered a few questions the kids had about our bike before we were on our way again. We didn't ask to make sure, but assumed that our road continued to follow the big highway, and we were right.

Finally, we did have to get on the big noisy highway when our choices were get on a gravel road that didn't look like it even went where we wanted to go, stay on the road that we'd been on past the “dead end” signs, or Route 94. We figured we'd had a good long run with the secondary roads and it was time for the highway. It was noisier, but the shoulder is as wide as a whole lane, and there is a rumble strip between traffic and us, so its not a matter of safety. 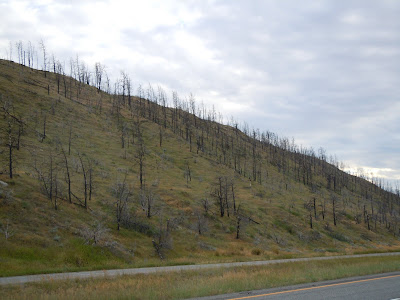 We passed a whole mountain of burned trees.
We followed the highway to Reed Point, where we got off the highway to take a break. When we saw an RV park, though, we began thinking about stopping for more than just a break. We asked the rates and if they had Internet ($15 and they did), then decided to spend the night there, about 16 miles shy of our goal. Hopefully, we'll just make up those miles tomorrow, when we don't have a super long day planned.

The park was okay. It was right next to the highway, so traffic sounds were omnipresent, but the bathrooms/showers were nice. We had to walk across the street to get the Internet signal to work, so we only looked at the wonderful comments people had left on the blog entries before setting up the rest of our camp for the night. We did a little writing in the tent, and then Brett read a few pages of The Incredible Journey to Jenny before we went to sleep.
Posted by Jenny at Sunday, August 01, 2010