Waking up in the morning at Testy Festy, all we wanted to do was get out of there. It was early and many people had finally fallen into a drunken sleep. A few people were milling around, and probably had been all night, some still with drinks in hand. Two men rode on four wheelers slowly swerving around the tent spotted field, beer bottles swaying in their free hands as they stared blurredly ahead. We couldn't pack up quickly enough. 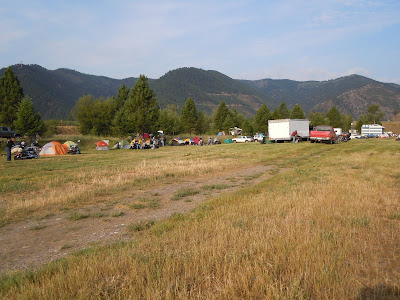 A quick photo from our corner as far from the craziness as possible.
On the way out of the field, Jenny snapped a few photos of all the tents and people, but we don't think the shots do the festival justice. Pedaling 6 miles into the little town of Clinton, we found what looked like the only place to get something to eat at a gas station/food store.

We spent a while eating a breakfast of cheese, salami, jo jo's (potatoes), avocado, and juice outside on the curb. There were a lot of the Testy Festy folks around, and it wasn't exactly a great spot, but we felt much better after breakfast, and were eager to move on.

As we neared Missoula, we made one short stop to see if we could get an Internet signal. We wanted to email a rental application form to Selena who would be showing an apartment for us today to a prospective tenant. No luck though, so we continued on after calling her and filling up our water bottles.

About a mile later, we spotted another tandem on the other side of the road pedaling towards us! The couple had also come across the country and were on their way to Seattle! They informed us that Adventure Cycling headquarters are in Missoula and that they give out free ice cream if you stop by. 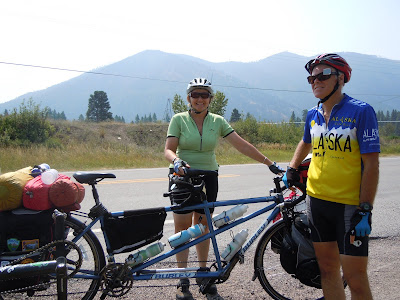 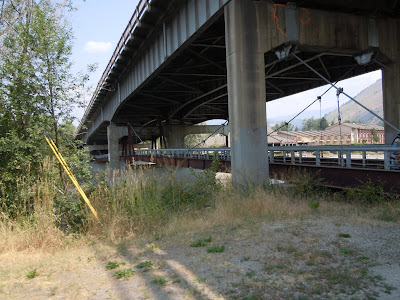 Below the car bridge in Missoula, they had a bike path bridge! How neat!
That was enough for us: we pedaled HARD to get to town in time. We got a little lost, but still made it in the door before 1:00! We wanted that ice cream! The folks there were so nice. They took our picture and put it up on the wall with all the other touring cyclists that have been through there this year. They even stayed open a few minutes late so we could take our time looking at all the cool old bikes on display and photos on the walls. They gave us a free year's membership, making the two maps we bought for our trip down the Pacific Coast cheaper. 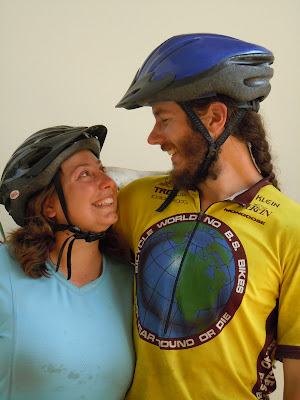 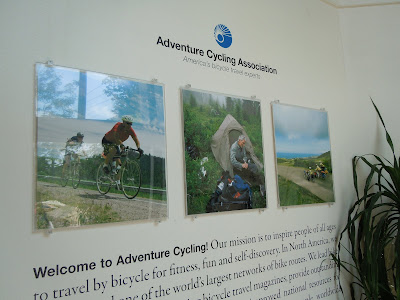 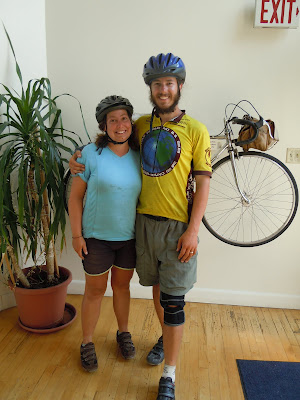 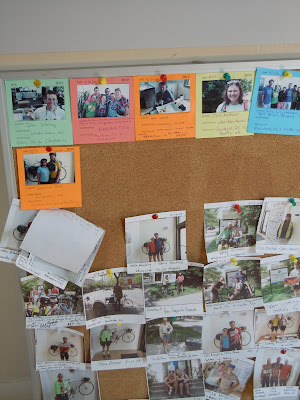 A few pictures from the headquarters/museum. Our photo is the last one with the orange background!
After our ice cream sandwiches and some photo ops, we thanked them and left the building. Outside we met a nice couple from Germany who were doing a long loop in the western United States. We love seeing folks who are also out here doing this amazing thing. 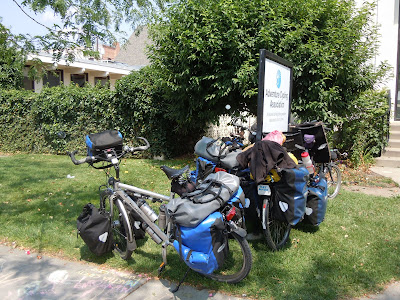 A bunch of bikes outside Adventure Cycling Association headquarters.
Next, we went to a cafe just around the corner for a while. We knew we didn't have too much further to go today to put us in great position to climb our last mountain pass tomorrow. We spent a couple hours in the air conditioning working on the computer and some correspondence. 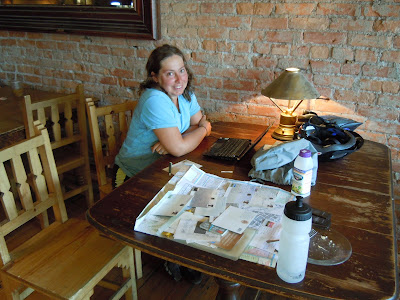 We ate a little and relaxed a lot.
As evening neared, we got back on the bike and made our last stop in town at a grocery store. We explored the bike paths to get there, though they were a bit confusing. It wasn't a co-op, but it was GREAT. We got things for the next day, and also some sandwiches for dinner, eating some now and saving some for later. Then, it was time to leave Missoula, even though it seemed like a decently cool city. 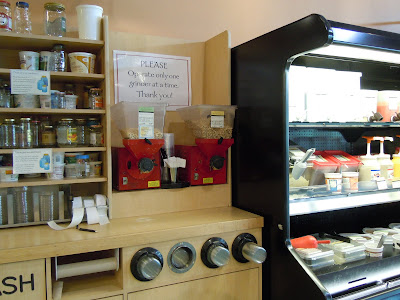 This store was great! It supplied clean containers for buying bulk foods into. They had a huge selection of bulk items, including mustards, sauces, mayonnaises, salad dressings, etc. 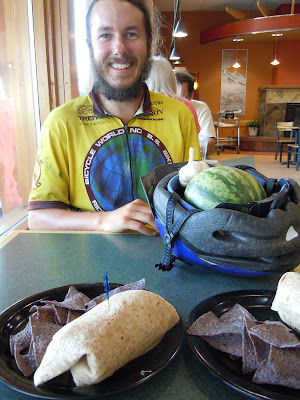 Some food for now, and a small watermelon for the top of Lolo Pass!
The ride out of the city wasn't very pretty or noteworthy. We had a couple hills to climb (haven't had those since before Butte!), and then we found the campground we were looking for. It is a dance center as well as a campground, and they were in full swing with their Saturday square dance. Most people at the dance were older and very dressed up in colorful, frilly attire. It looked like fun, but we were tired and a little intimidated. 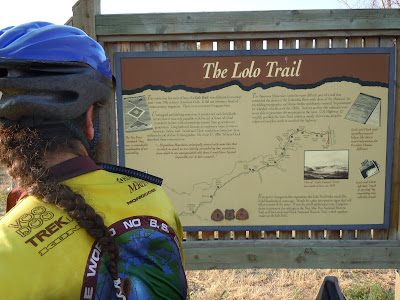 Brett reads the sign talking about the historic Lolo Trail.
They had scales in the bathrooms and we were excited to weigh ourselves for the first time since we left. Brett had lost about 15 pounds, and he was shocked. Jenny weighed exactly the same as when we left. We don't understand why one of us lost a significant amount and the other didn't. Different bodies deal with things differently, we guess. We were both a bit perplexed. We set up camp, snacked on foods again, and went to bed hoping for a good climb tomorrow.
Posted by Jenny at Saturday, August 07, 2010