Up early, around 6:30, we were both tired. It was a clear sunny morning and we spent a couple hours slowly getting ready to leave. By 8:30 we were putting the last of the 7 pound bag of ice we bought from the campground into our water bottles and looking forward to getting someplace nice and shady to eat breakfast. 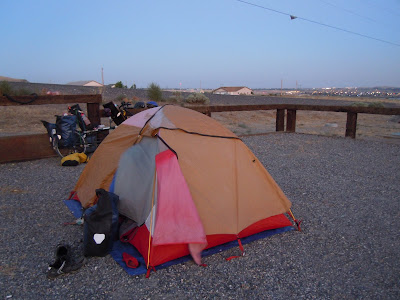 Our rocky sleeping place (picture from previous evening before the wind came.)
It took us a good 5 miles to find a spot. Shade is hard to come by in these parts and the pull off by the side of the road were we stopped only had a little. It wasn't the nicest place to have breakfast, but we put down the tarp and spread out the food we had. The watermelon was delicious! 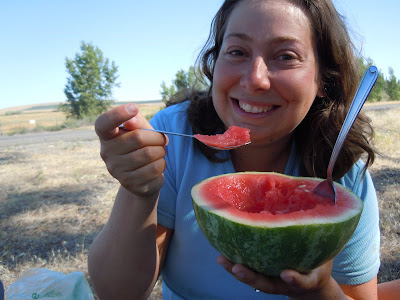 Watermelon! What a fun way to start our day. 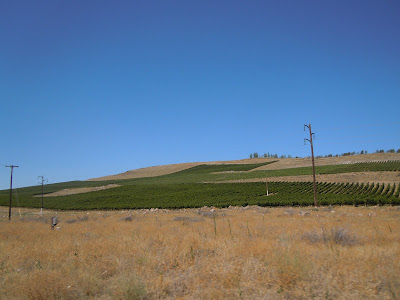 It was strange to see a patch of green when everything else around it was brown.
Knowing it was going to be another hot day, we put on sunscreen before heading out again after our meal. We didn't expect this part of Washington to be such a desert climate. There wasn't much to look at as we biked on, except for the occasional green vineyard. By early afternoon the temperature had reached the high 90ies and we were having a hard time standing the heat. We saw on our map that there was a place to swim at Crow Butte Park, a little island, only a mile or two off our route. When we got to the turn, it was downhill (that we'd later have to climb back up), but we took it anyway. 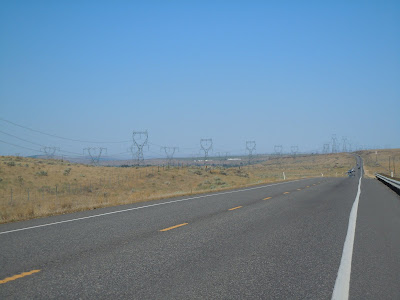 We got the feeling that there was a lot of power in this part of the country.
The park was a green haven in a brown world. There were trees providing tons of shade and coolness; there was grass that felt nice on our bare feet; there were picnic tables and lots of families eating and playing. We planted ourselves at the first free table we saw and after a few minutes of just sitting there in the shade, set about cooking some lunch. After our yummy meal of egg noodles, cheese, broccoli and sausage, we went for a quick dip in the water. It wasn't the nicest place to swim because it was crowded and the water was kind of mucky, but getting cool still felt wonderful. 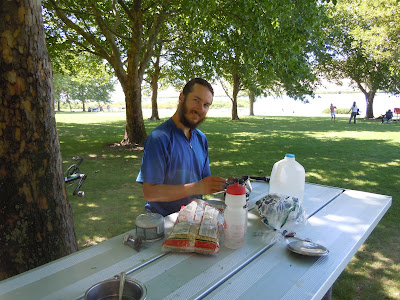 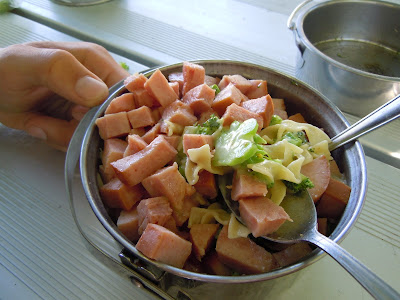 Ready to eat!
It was about 2:30 when we left the park behind. The temperature was now nearing 100 degrees. We rode the mile or so back out to the small highway, moaning at how quickly the heat struck us again. Buying ice at the park was a good move on our part, so at least we had cold water to drink for a while. 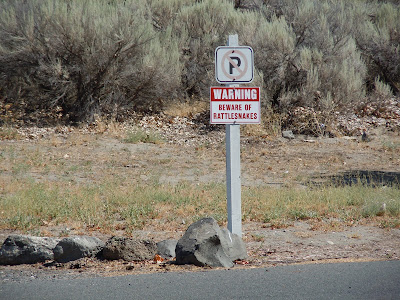 We didn't see any snakes today, but we made sure to be aware of them. 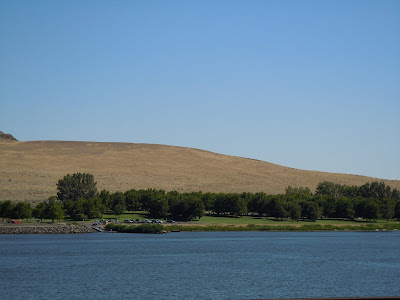 This is Crow Butte Island. We were just over there in that nice shade!
There still wasn't much to look at. Even the river/lake was sometimes hidden from view and pretty monotonous when it wasn't. At least we could tell we were making very gradual progress into the gorge as we traveled further west.

Roosevelt was the next town after the park, but there wasn't much town. We stopped inside a little convenience store and wanted to linger in the air conditioning! We bought a few things, including something we hadn't see before: canned chunks of chicken. We thought it would be a good idea and something different after so many meals that seem so similar. Outside in the shade, we ate a treat or two, and spoke with some folks who also stopped by the store. One man who came over to us, Richard, works on the electrical parts of new wind turbines, and it was fun to talk with him about the geography of the area as well as the usual stuff about our trip. Catching a free wireless signal, we read a few nice comments on the blog and some email before loading ourselves back on the bike and heading out into the heat again. 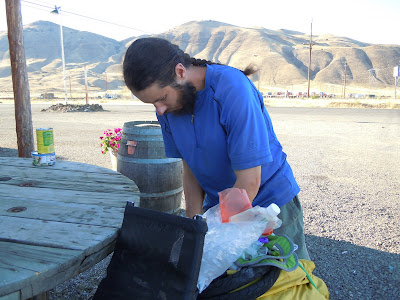 Brett straps things on the bike. See all that ice? It turned into water pretty quickly.
As early evening approached and we biked further into the gorge, the terrain started to have more ups and downs to it. Eventually we started to get into the riding again, but it was slow going and we wondered if it might have been a smarter idea for us to have stayed at the free campground back in Roosevelt. Oh well, too late now! On we went. Brett started to get very tired and cranky, maybe because he was hungry. A break by the side of the road and a snack of hummus and carrot helped him feel a little bit better. While we were stopped we noticed a cute little gecko by the side of the road. We really were in the desert. At least now that evening was coming it was starting to cool of a little. 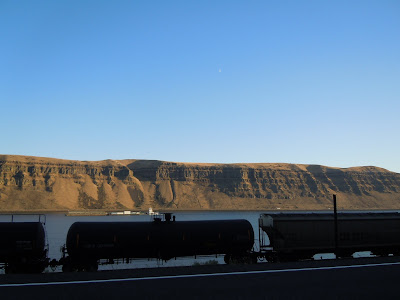 A train, a boat, and cliffs.
A few miles more after our snack break we noticed the daylight was fading. The moon off to the left was beautiful in the sky and though we knew we'd probably end up biking in the dark again, we felt ready to take on the challenge. We were moving along faster than we had all day. A couple miles before the John Day Dam we started to climb. It was hard to watch the traffic on the other side of the gorge stay right down by the water while we climbed up a mountain. But, with the red flashing lights of the wind turbines on the mountain tops flashing us on, we pushed and pushed up the hill. At one point we thought we had gotten a flat tire, but the noise turned out to only be a piece of straw stuck in the chain. Whew! While stopped, we used the opportunity to replace the batteries in the back light. We had an incredible view looking down at the dam all lit up in the darkness when we reached the top.

Our descent was chilly! For the first time all day we needed more layers of clothing. Coasting down long hills in the dark can be a bit scary, especially when they are curvy. Brett kept us safe though, and we made it to an intersection where we had to make a choice: keep going along the north side of the gorge to one campground which would lead us to stay on that side tomorrow as well, or continue downhill to the river/reservoir, where there was a different campground/state park and we'd probably cross over to the south side in the morning. We chose the way that led more downhill.

When we go to the bottom and turned into the park, the sign on the gate said “Campground Full.” Another couple in a car were pulling out of the gate and we asked them if they knew if the sign was correct about the fullness of the park. They said that yes, it was full. Well, gosh. It was late, and this was our stop for the night. We decided we'd go in anyway, look around and find a place to pitch our tent even if there weren't any open spots.

Mary Hill State Park was very large. As we pulled into the first section of sites, we noticed an open spot. Funny that the other people seemed to think it was full. We left the bike at the site and walked back the short distance to the information board and confirmed that the site we had found didn't appear to be reserved. Perfect! Happy to be done, we quietly set up the tent and then ate some food before brushing our teeth and settling into our cozy little home for the night. Tomorrow we would hopefully meet up with Jenny's brother Timmy and see more of the Columbia River Gorge! 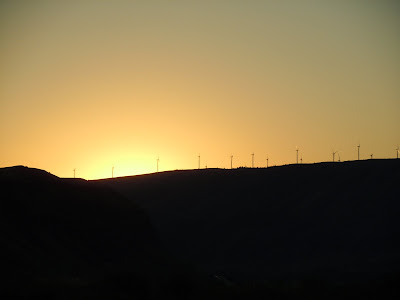