Jenny slept really well last night. Brett also got some good rest, except for waking up around 5:00 to a sound outside the tent that he thought might have been raccoons. Once we got up, we set to work taking down the tent and cooking some breakfast. We were the first in our campsite to wake up, so we were quiet as we moved about. We were in good moods and we decided to make that potato soup again for breakfast. While Brett was cooking, Jenny packed up, checked the tire pressures, and lubricated the bikes chains. 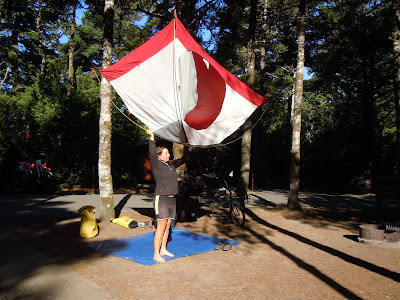 Jenny shakes out all the sand and crumbs from our tent.
Once they woke up, we got to ask our fellow travelers more about their trip. Turns out that they took the train from San Francisco up to Seattle, and are in the process of pedaling home. We all exchanged ideas and experiences with different biking and camping equipment. They admired our bike, so before we left we let two of them try it. They were struggling to get it going and were about to give up, so Brett offered to drive. Off they went, and Brett's passenger was so excited and happy for the chance to try the tandem. 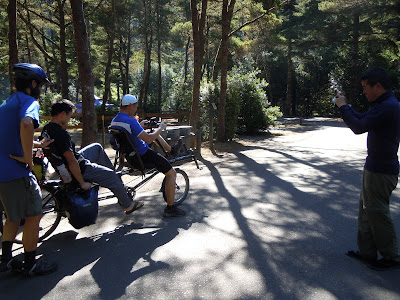 Our new friends try to get the Screamer going. 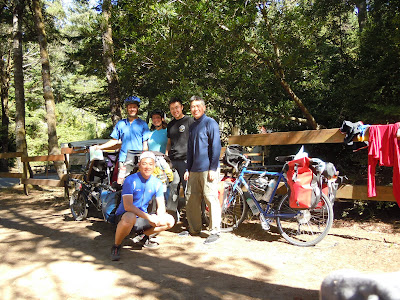 Five happy bikers!
The park ranger came by this morning and after figuring out just what had happened last night with the campsites and payment, the five of us were able to split the cost of the single site we'd shared. We were glad it all worked out the way it ought to.

Since we had packed up early, and the others hadn't eaten breakfast yet, we were the first to leave. It wasn't an early start, but we were in such high spirits, we were well fed, and it was a beautiful day! Off we went, up the hill and out of the campground. 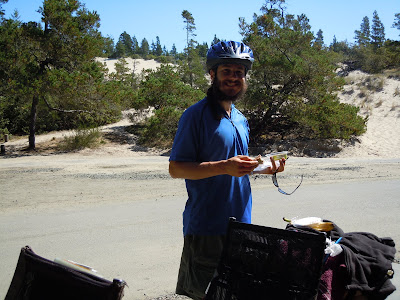 Snacking at the next campground.
A few miles after we started, we found another campground and stopped for a bathroom break and a quick snack. When we turned back on to Route 101, we noticed that there were two touring cyclists ahead of us! We wanted to catch them. Keeping them in our sights, we followed behind them for miles. They set a good pace and kept us pushing to keep up. In North Bend, the bike route turned off of the main highway and we got a chance to introduce ourselves to the two cyclists. They also have a blog about their trip: http://roundthebendpedaltour.blogspot.com! 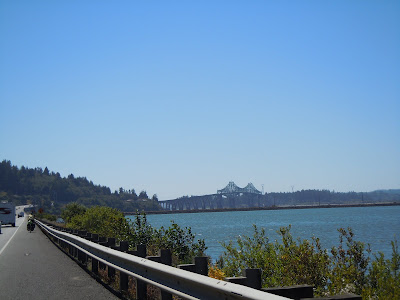 The chase is on! What a nice view of the upcoming bridge, too. 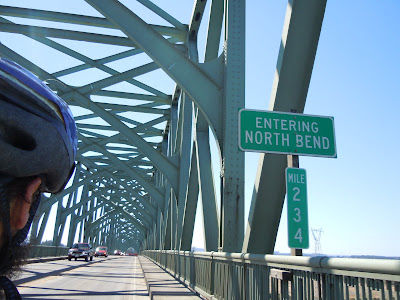 Traffic was patient while we crossed the bridge. Crossing bridges isn't exactly relaxing, but it's fun and everyone is nice. 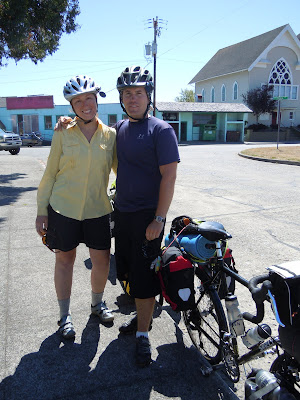 We got to meet Giana and Joe, and we really hit it off. They seem like so much fun!
While the four of us were talking, the lady who lives in the house we were stopped near came out and offered us cold water! She was so sweet and full of energy. “I used to bike all around when I was younger!” she said, very enthusiastically. She was a tiny lady, a year away from her 90th birthday. The large pitcher of filtered water from her refrigerator was too heavy for her to pour, so Jenny filled up water bottles while the sweet old lady told us about her life and asked us questions. After wishing us well, and repeatedly asking if we needed anything else, she went back inside with a smile on her face. Some people are so happy and kind, it's amazing.

The four of us decided to bike together and try to find an ice cream place while we were in the town. It turned out to be a larger town then we'd been through in a while and navigating traffic was a a little overwhelming and stressful. After a few miles, we still hadn't found a place to stop for ice cream. There were mostly big strip mall type stores. When we neared a Walmart, we decided to stop and go in to check to see if they had some fuel for our stove. Joe and Giana biked on, but we hoped to see them tonight at the campground we were both heading for.

The Walmart was out of our fuel, but they did have some Ben and Jerry's Chunky Monkey ice cream! We sat outside on the curb and finished the whole pint together. This really wasn't our kind of town. Maybe it was just because we were in a Walmart parking lot, but it seemed like everyone was in a rush with frowns on their faces. As soon as we were finished eating our treat, we set off again.

The afternoon brought some nice biking. After a break in Charleston where we made sandwiches for lunch, we started our climb up the Seven Devils. A set of hills that earns that kind of name can't be tame. It was a long climb up and was fairly steep on parts. The views from the tops were lovely. We could see the ocean, way down there, past the many partially logged hilltops. Also, the downhill off the ridge was a blast! We cruised down to find the state park not far past the bottom of the hills. 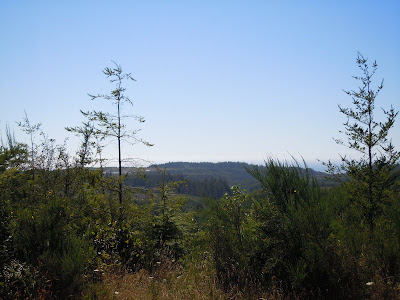 A view from high up on the Seven Devils hills.
It was early evening still, and we were among the first bikers to arrive at the campground. This one had a very large hiker/biker area. Just as we finished setting up the tent and unpacking our cooking gear, other started to arrive. Joe and Giana were not far behind us, and after them were the three guys we'd shared a campsite with last night. It was like a family reunion! We also got to meet a really nice man from South Korea who is visiting the United States to learn how to fix bikes, and is biking from California to Oregon in between classes. We all compared maps and gear and talked about the terrain to the north and south. It's so much fun to share the experiences of the road with other cyclists!

One of the best parts about tonight: This campground had HOT SHOWERS! Oh, the little joys in life. Another joy in life is food, and Jenny did us proud, cooking up rice and beans, with broccoli, carrots, onion, garlic and spices! Compared to others, we have a tiny stove, but we would stake our cooking against any other's out here on the road. 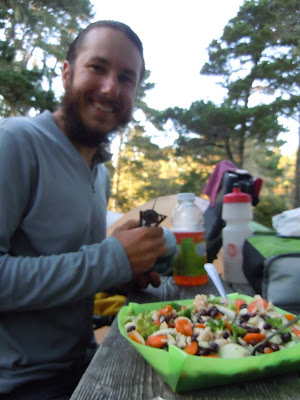 About to eat our yummy dinner, after hot showers.
It was a good thing that the showers were hot, because the evening got pretty chilly, and it wasn't long before we were diving for the tent. The others around us were settling down, too, and we all enjoyed a good rest. 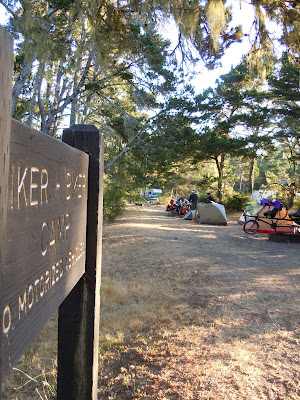 A lengthwise view of the Hiker/Biker area in Bullards Beach State Park.
Posted by Jenny at Tuesday, August 24, 2010