This morning, Brett decided that his knee brace had outlasted its usefulness. His knee hasn't been bothering him for a while and the brace has started to fall apart. We hope it was the right decision to throw it away. If not, we can get a new one. 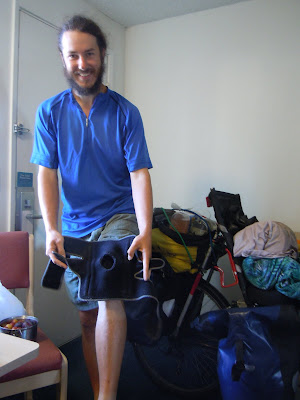 Bye, bye knee brace. Thanks for all your support!
It's always sort of a treat to wake up in a hotel room. There is so much space to move around, no tent to take down and pack up, and you don't have to go outside to use the bathroom. It feels almost luxurious. We took our time getting ready to bike. By the time we were packed and out the door, we were hungry for lunch, even though it wasn't quite lunch time yet. We second-breakfasted on yummy sandwiches of our own creation, then headed over to Albertson's to get something to drink and a treat before heading out of town. 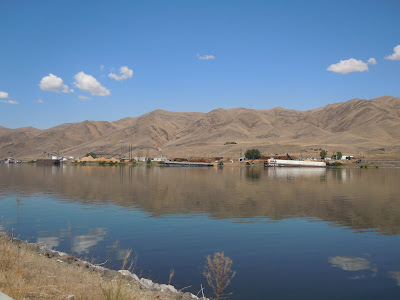 A picture of lots of logs and barges on the other side of the river as we were leaving Clarkston.
Shortly after we left Clarkston we started climbing. The temperature was high and the road was long and the grade was fairly steep. Pushing up the hill, we kept expecting to round the bend and see the top, but it was a long time before we finally saw the rest area at the summit. We were running out of water by the time we reached it, but the only water spigot there was questionable, so we only filled up one bottle. There were plenty of sprinklers running, though. We did see that this hill has a name and was even labeled with an elevation: Alpowa Summit, 2785 feet. No wonder we struggled to climb it! It was about 2000 feet higher than the start of the day! 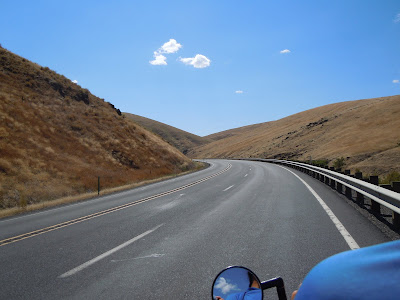 Is the top around that bend? Nope! 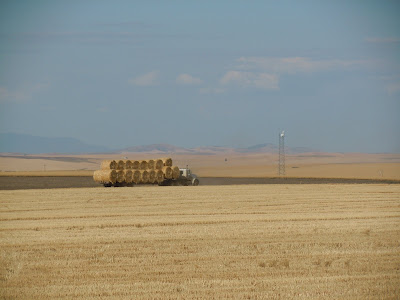 A hay truck at the top of the mountain. 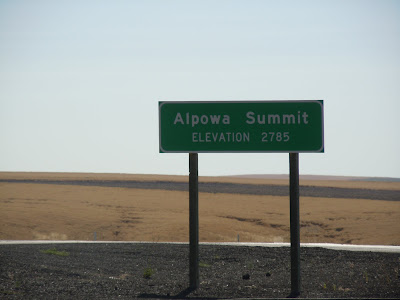 It felt good to get to the top! It took so long.
Resting at the top was okay, but it was hot enough even in the shade, and we wanted to get some more miles done. At least there was some decent downhill into the next town. We got a gas station convenience store just before they closed at 5:00, and we bought a drink, filled our water bottles, and Brett bought a cookie as a treat. We asked for advice on which way to go next, but the clerk wasn't very helpful. He confirmed that staying on Route 12 had one good-sized hill, and that there were basically two climbs on the shorter way, and probably some gravel. 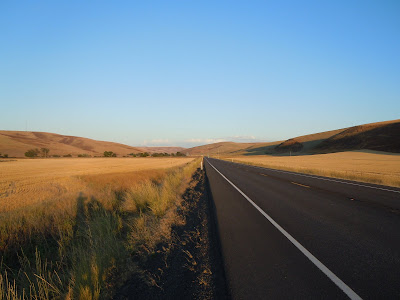 Lovely fields in the late afternoon light.
After hemming and hawing a good deal, we decided to just stay on Route 12. Who knows if that was a good decision? The road that started the short cut showed a steep climb right off the bat. Route 12 was significantly longer. In any case, we'll never know. The way we did go was fine for a while, and then it started to climb. We felt like twice in the same day we had to climb something that we had no idea how long it would last, but it must be almost over. It wasn't. It was getting dark, and still we were climbing.

Some folks might have panicked or just found a place by the side of the road, but we plugged on. There were hawks above us that seemed very upset that we were there. Climbing slowly as we were, we were in their territory for a long while, and they kept flying around us, nearly dive bombing us. It was a bit scary, actually, and in the coming dark, Brett would sometimes turn the headlight on to see if that would help keep them away. They never did attack, but it was a while before we relaxed from that.

At least one really nice thing came out of that climb into the darkness. We both got to see lots of shooting stars! There must have been a named meteor shower happening (we're sure Brett's mom would know which name), because we saw about a dozen between us. The ones we liked best were the ones we both saw.

Now fully dark, we were still climbing. We counted the seconds from the time a car would pass us until it rounded a bend in the road, disappearing from sight. We listened to hear if it was still going uphill or not. Finally, we did reach the top, and started down the other side. Brr! It was cold, descending in the dark! We stopped and put on another layer each to try to warm back up. A bit more downhill and we saw the lights of the approaching town, Dayton. We guessed there would be some sort of camping in Dayton because our map listed it as having something, but we wanted to find a bit more food, too, if we could.

There wasn't much open in Dayton, but we got to one convenience store just before it closed. We bought chocolate milk and a couple treats because they didn't have much else. The clerk wasn't helpful, thinking the only RV park was already behind us. (Did we mention we hate to backtrack?) We asked a couple of really nice fellas outside the store who had just pulled up. We enjoyed talking to them about our trip for quite a while, and they mentioned a few more possibilities for camping west of town. Perfect! One was an RV park they didn't speak highly of, and the second was a state park.

Did we want the Internet of the RV park or the quality and maybe price of the state park? We wanted both, really. When we saw the lit sign for the RV park (“Shangri-La”? Really?), we pulled in to investigate. It was a little creepy, but we used the bathrooms and tried to go on line but their connection was locked. Darn. State Park, here we come!

The riding was flat and easy and it was only a few minutes before we found Lewis and Clark Trail State Park. We pulled in, picked the first open site and set up quickly. It felt so late at night, though it was probably only about 10:30. Still, we didn't do much besides drink some water, snack a bit and then our heads hit the pillows and we fell asleep listening to the sounds of the coyotes in the distance.
Posted by Jenny at Thursday, August 12, 2010