Brett woke up this morning at 7:20, but we had a really slow morning. Jenny hadn't slept well, and we were feeling a bit low. Brett talked with Bill, who was touring around by bicycle from Steamboat Springs, CO. Then he cooked up some breakfast: egg noodles, broccoli, and sausage. Even after we ate we weren't feeling like riding, so it was a later start today. 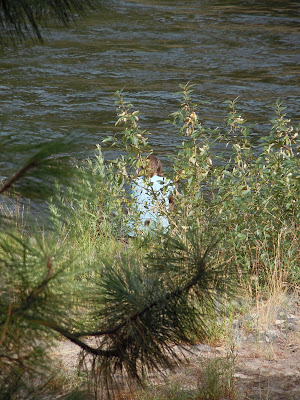 Jenny spent some time sitting down by the water, looking at rocks, while Brett cooked breakfast.
When we got going, we knew we would probably make it to Washington today. All we had to do was keep on Route 12, right through Lewiston, ID and into Clarkston, WA. Our biggest challenge while riding today was trusting the logging trucks as they passed us. This section of Route 12 doesn't have much shoulder, and it's often full of loose pebbles and other debris. The trucks aren't willing to slow down except in emergency situations, so they come barreling by. The first few didn't seem to move over much even though they had room to, and that annoyed us. 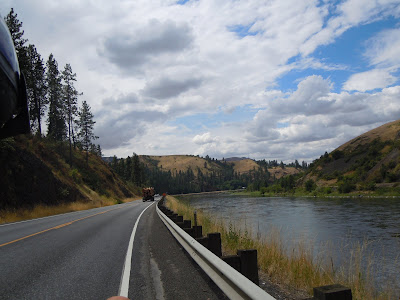 We shared the road with many logging trucks today.
Then, we started waving in a friendly way to the logging truck drivers headed in the opposite direction. Whether this helped (via radio contact with the drivers on our side) or not, the rest of the drivers seemed to give us as much room as they could after that. We know they are on a schedule and want to get their loads in, and we appreciate their situation, we just want them to move over when they can. By this point, we're pretty used to riding right next to speeding traffic, but the big trucks and huge RV's sometimes scare us when they blow by. 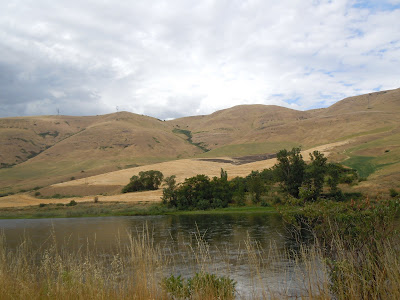 Pretty hills. It seems like we say that a lot. 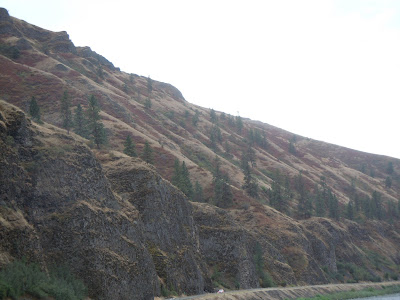 Pretty hills. Just kidding. These are beautiful!
We stopped at a rest area sometime in the mid-afternoon, and chatted with a fellow who used to work with the logging truck drivers, and he mentioned that he's never known any of them to intentionally buzz a bicyclist. He said they might not appreciate us being on the road when they have to get by, but they warn each other of us on the road via the radio. He also asked us all the usual questions about touring and our trip. He's getting back into riding, and is thinking of trying a weekend trip sometime. We wish him the best, because we think this is a blast! It's such a great way to travel. 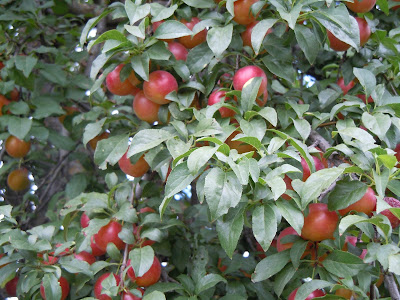 We finally found some ripe fruit!! 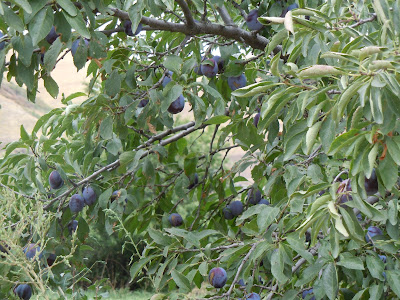 These weren't quite ripe, but we ate some anyway. 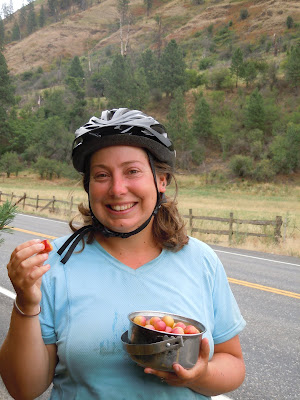 These plums were SO sweet and juicy. The tree (in the picture above) was covered with them, and they were perfectly ripe.

Our stomachs were grumbling as we neared Lewiston, but our excitement level at nearing Washington was growing, too. We went down the main street to find a restaurant, preferably with Internet. One listed wifi, so we picked that. It featured Italian-American food, and from the prices on the menu, we were looking forward to nice big portions of chicken alfredo and beef stroganoff Sadly, the dishes we were served were pretty small, and left Brett still feeling hungry after we left. Also, the Internet was not a strong connection, and we had to change tables to even get it. Sheesh.

After our early dinner, it was only a hop, skip, and a pedal or two over the bridge into Washington! It occurred to us that Massachusetts to Washington is pretty much “across the country” and that felt really, really good. It was fun to think that we had “made it,” in a way. We are excited to see lots more on this trip, but it was great to feel like we've really accomplished part of what we set out to do. 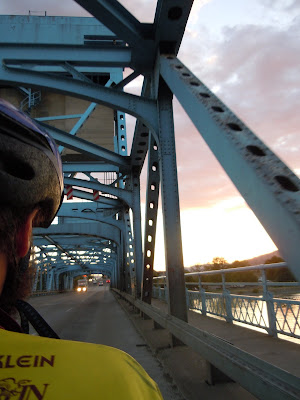 Crossing the bridge into Washington!! 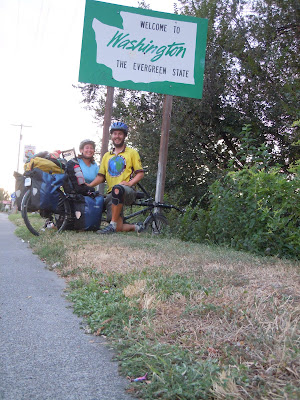 We spent a while lining up this shot. 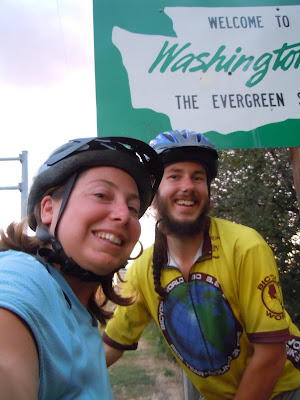 Yay!!!
It was time to buy some groceries and snacks for the coming day, and luckily for us the grocery store was right on our route just past the bridge into Clarkston. We were pretty tired and by the time we got done in the store, we came out to darkness. We talked it over in the parking lot: there was a hotel just a block back, and there was a campground several miles further on, and we were pretty tired. We decided to check the hotel's rate.

The hotel had a reasonable price after their “fishermen special” discount. Note: Most hotel clerks seem to have the ability to give you just about any discount they have access to, without you qualifying for them. Our room was great. It's always fun to stay in a hotel room. We get a nice bed to sleep in, a hot shower and Internet, and we even took advantage of the coin-operated laundry facilities!

Before heading to our room we chatted with three motorcyclists who were also staying at the hotel. They were also touring the country and were so friendly. They had lots of questions about our bike and our trip and we talked about all the wildlife we'd see along the way and shared other stores from our rides. These three were really the first motorcyclists that we've met that we've felt were trying to have the same type of a trip as ours. It was refreshing to meet some with whom we enjoyed talking.
Posted by Jenny at Wednesday, August 11, 2010