We woke up excited today because of the possibility of reaching Timmy, who was arriving in Portland with his bike in the early afternoon and then biking towards us! Portland was about 100 miles away still from where we were, but we figured if we could do about 60 miles, and Timmy could do 40, it would be perfect and we'd meet him somewhere near Cascade Locks, OR in the evening. This was our view from our campsite. Amazing to wake up to this after coming in under cover of darkness.
Jenny packed up everything while Brett cooked some breakfast and we were out of the campground pretty quickly. Less than a mile away was the bridge over the river. The bridge didn't look friendly to bikes at all. Postponing the crossing just a few minutes, we stopped at a fruit and vegetable stand. We got peaches, apricots, and a small zucchini for later. A few feet before the bridge we got our first view of Mt. Hood to the southwest! First glimpse of Mt. Hood in Oregon.
Our luck was good with the bridge crossing. When we started onto it, there was no traffic behind us at all. By the end, a few vehicles were behind us, but it wasn't so scary as all that. After we got off the bridge, at the next intersection, a driver rudely cut us off, but that hasn't happened often. There wasn't much on the Oregon side of the bridge in the way of nice stores to buy food supplies, but we found one little market that would do. We bought cheese, chocolate milk, juice, corn tortillas, and a freshly baked banana nut muffin. The muffin was so good we went back in and bought a whole loaf!

It was eight miles to our next stop at a small park for a break. We were happy to stay off the Interstate for those miles on a frontage road, even though we'd have to get on when we left. We drank some juice, Brett rested in the shade, and we both used the restroom there. We left about 11:00, and the riding was sunny and pretty warm, so the going was a little slow. 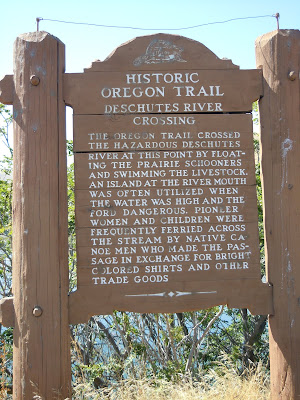 Some history we came upon, crossing a part of the Oregon Trail. 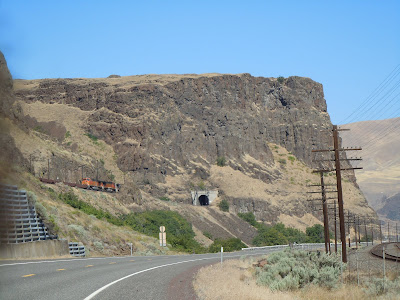 The train is about to go into that tunnel! Pretty neat.
Timmy called from Portland, saying that he was heading toward us. Jenny talked to him for a little while, telling him where we were and our plans for the day. We made a plan to check in later, but made a tentative plan to meet. Meanwhile, we stopped beneath an overpass near The Dalles Dam for some shade and to transfer pictures from our camera to our computer. A different mirror shot!
Back on the highway, it was still hot and noisy but the views of Mt. Hood were getting spectacular. We have taken so many pictures on this trip! It's going to be fun to look at them all on a big screen when we get home. The blackberries by the side of the road were plentiful throughout the day. It was a nice excuse to stop for 5 minute breaks every now and then we we saw a particularly good looking patch.

A sad thing happened when we ran over a some sort of a diaper on the side of the road. Our rear fender snapped. The thick plastic from the diaper got stuck between the tire and the fender and the pressure of it pulled the fender with the wheel so that it broke. It made a very loud noise and we thought at first that we had a flat tire until we got off and checked. Picking up the pieces and shaking our heads at the sad state of the amount of trash on the roads, we pushed on. Why do people throw so much trash out of their cars? 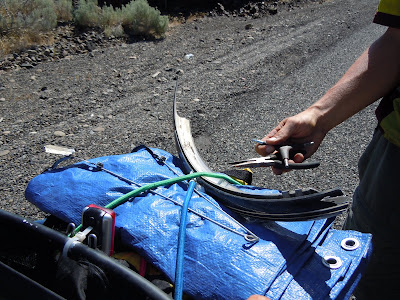 Brett straps the broken fender to the back, while holding the tools he used to take it off. 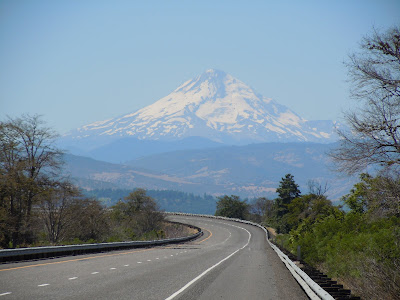 Stunning Mt. Hood rises above us.
In The Dalles, a cute town, we stopped for lunch and a much needed long break inside a nice air conditioned cafe. We both ordered salads, one with chicken and one with bacon and sun dried tomatoes. They were both very tasty and Brett got a scone for dessert. It was so good he got another. 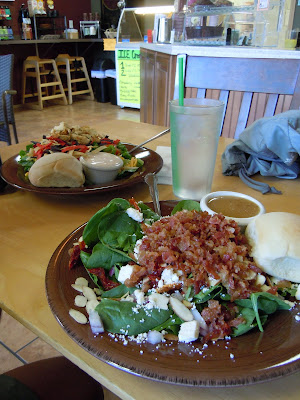 These tasted as good as they look, or better!
About 3 or 4 miles down the road, Brett remembered that we'd left Jenny's phone plugged in to charge back at the cafe. Luckily, we had the phone number of the chamber of commerce on a map we'd just gotten there, so we called and got the phone number of the cafe with Brett's phone. Then we called the cafe. The lady was really nice and said she could mail it ahead for us. Then we hit upon a better idea: her daughter was leaving and driving right past where we'd be in few minutes!

After our we met the young woman in Rowena, and gratefully received our phone, we made a choice between the much hillier small road that might offer us a chance at a bike-only path, or the busy highway which would be less hilly. We chose the highway because we were getting a little tired and we really wanted to get as far as we could to meet Timmy.

The highway wasn't very exciting, and we made two more stops because it was very hot and we were slogging. Looking up at the hill we would have climbed as we pedaled on the gradual highway, made us feel happy, though. We stopped for a quick check of the Internet and a milkshake at McDonald's, and also for bit of a break at a rest stop where we splashed each other with some really cold water from the drinking fountain. The big water we've been following for a couple days. 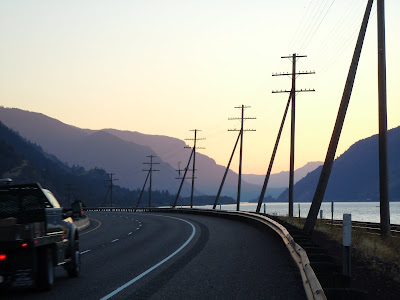 Evening sky from the shoulder of the highway.
Dusk was coming on, and still we hadn't made it to the campground that Timmy had found. We were getting close, though, and we pushed on in the cooler evening air. Using our headlight just a bit as it was getting darker, we pulled off the highway at last into the town of Cascade Locks, and found the campground. Timmy already had his tent set up, so we set up ours next to his and made some dinner: beans, rice, cheese, zucchini, and some of an onion we'd found on the side of the road a few days back!

It was so much fun to see Timmy! There were hugs all around and we exchanged stories from the day. Timmy had seen a mama bear with a two cubs, and he'd climbed a big hill on the smaller roads from Portland. He was really tired. Before we brushed our teeth and went to bed, we took a nice hot shower that felt really good.
Posted by Jenny at Monday, August 16, 2010