After a good night's sleep, we maintained our great moods from the end of yesterday and started packing up fairly early. Before we left, we had a nice breakfast and said our good-byes to Eddie and Beverly. Eddie did a really neat ceremony for us, wishing us good alignment with the elements and the hills. The tinkling of the tiny bells was a beautiful sound, and we're excited to wear the bracelets he gave us made by children in South America. 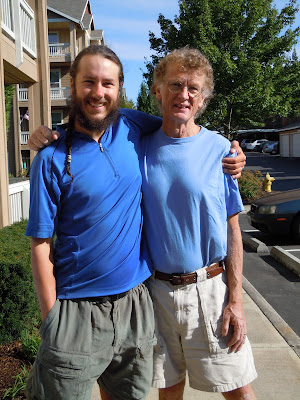 Brett and Eddie.
By 9:50, we were on the bike and on the road once again. We really wanted to reach the Pacific Ocean today, but we knew it would be a long haul. Having a goal like that is very exciting to us, however. We hadn't planned any exact route through the suburbs of Portland, but we knew the general direction. One thing became clear as we made our way west and south: nobody around here knows the roads by their highway number, they know them only by name. We had picked out two numbered highways, but it looked like we had to just guess from our sense of direction.

Along the way this morning we found a yard sale to poke around at, some fruit trees that didn't yield much, and lots of quiet roads and nice weather. We were getting hungry when we reached an intersection that had a diner. We'd been riding along and the suburban sprawl had abruptly given way to farmland and fields. Then this diner appeared! It turns out they had wonderful food and we split a buffalo burger and a delicious milk shake. 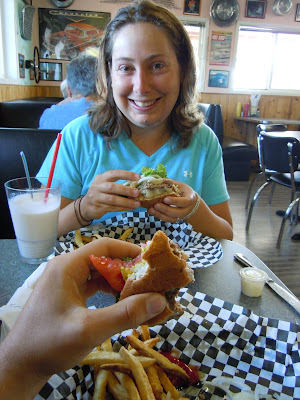 We really like food. The buffalo burger tasted a lot like a hamburger.
Shortly after we got back on the road, we started climbing. We knew we'd have a few climbs today and we were prepared for them, but it was still a long few miles of steep uphill before we made it to the top. A break in the middle of the climb yielded a perfectly ripe peach and two very large, tasty looking apples from trees along the road, picked by Jenny. We also had a beautiful view of Mt. Hood. 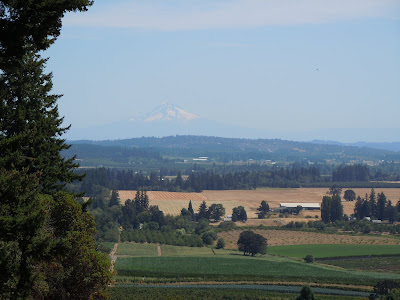 Beautiful view from our climb today.
Taking a very, very, curvy and steep downhill put us in the town of Gaston, where we picked up Route 47 and headed south after a quick stop to fill up our supply of water at a store. The rest of the afternoon we biked pretty fast and didn't take many stops. There were a few short rests to pick blackberries or take a picture but mostly we just pedaled and watched the world go by. 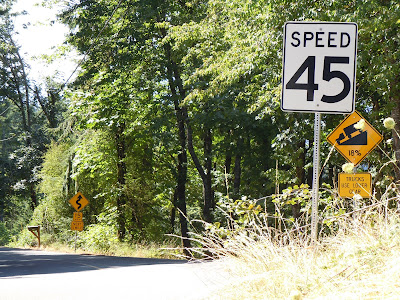 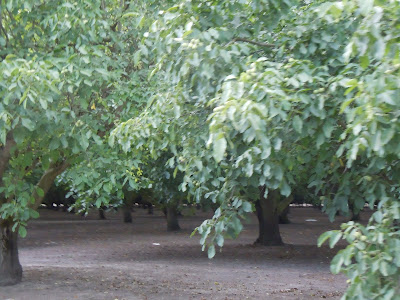 Throughout our day of riding we passed by many nut tree farms. These were the first we had seen. It was interesting that underneath the trees there was nothing growing, not even a blade of grass anywhere.
In McMinnville, we stopped to eat some more food from our bags, and explored a thrift store for a few minutes. Brett found a game he thought might be worth the $2. On the way out of town we passed a Great Harvest Bread store and stopped in for their signature free slice! Jenny sampled the rosemary bread, while Brett tried the sweet bread that was more like dessert. Fun! 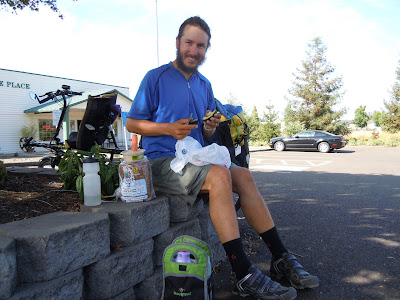 Brett snacks on hummus, carrot, avocado, bread and cheese.
As the evening started, we were getting ready to be done biking for the day, but we weren't sure when we would find a campground. We were only about 35 miles from the coast but knew it was too late for our tired bodies to push to make it there tonight. Plus, it was starting to get dark. We stopped at the first RV park we saw, but after we pedaled the mile down to the actual RV park, we saw signs that said that they didn't offer tent camping. Hmph. On we went.

A little while later, a very nice lady rolled down her window when we both were waiting at a stop sign and we asked her if she knew of an campgrounds in the next few miles. She said she was pretty sure there were none, but after asking us a couple of questions about our trip, she kindly offered us her backyard to camp in. We were tempted to take her up on the offer, but after thinking about it, rather than bike several miles in the direction we weren't heading to get to her house, we decided (maybe unwisely) to push on toward the coast and hope that we came across something. Our headlight had full battery and we really didn't want to go miles out of our way if we didn't have to.

By the time it was fully dark, we still hadn't found a place to stay for the night. We stopped at a diner just before Grand Ronde and got a lead that there might be a campground just a few miles further down the road! Yay! We were starting to get pretty tired and it had cooled off considerably so we were really excited at the prospect of almost being done for the day. It turned out that there was an RV park not too much further on, with an empty site for us to pitch a tent, locked bathrooms and nobody in the office to ask. We set up the tent and climbed inside to eat some dinner before going to sleep. It had been a long day and we hadn't quite made it to the ocean, but that's what tomorrow is for!
Posted by Jenny at Friday, August 20, 2010