Our first full day in Portland was a rest day for us. We didn't do any biking. In the morning we walked across the street to Whole Foods with Timmy to get some breakfast. Brett played Scrabble with Eddie when we got back, while Jenny and Timmy spent some time resting and talking. In the early afternoon, Timmy caught a bus into the city to take his train back to Seattle. The rest of the day we spent just sort of hanging around, enjoying our time off.

In the evening, Eddie took us out for dinner to one of his favorite places in the area, and we enjoyed the outdoor seating, surrounded by flowers We had hoped to catch some music, too, but the band didn't start until just as we were about to leave. The food was excellent, though, and so was the conversation. We learned some about Eddie's explorations into Shamanistic approaches to the world, and we shared some fun experiences from our trip so far. A few more games of Scrabble (and one of a variant called Clabbers) capped off the evening, while Jenny relaxed and rested. 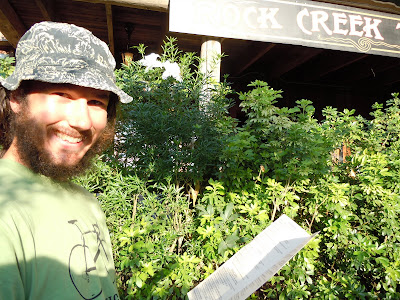 Brett studies the menu in the sun.
After breakfast the next morning, which ended up being around ten o'clock, Eddie drove us into the city so that we could retrieve our bike and ride it back to his house. After we maneuvered the bike back down the stairs and out of the building, it took us a while to get into the groove of biking. We had two mostly empty panniers with us and that was it. We weren't even wearing our normal biking clothes. It's definitely different to ride the bike mostly unloaded. We noticed that people didn't stop and talk to us as much.

The streets of Portland were lovely to bike around once we got off the main streets and started taking the back roads. The houses and different parts of the city reminded us of Seattle with all of its unique little neighborhoods. There was so much in bloom! After a bite to eat (again at the Whole Foods we visited two days ago), we felt much better, more relaxed and ready to explore and enjoy the afternoon. We weren't biking many miles, we weren't going to a new place for the evening, we were just doing whatever we felt like. It was a great sense of freedom, different than the kind we've gotten used to this summer. 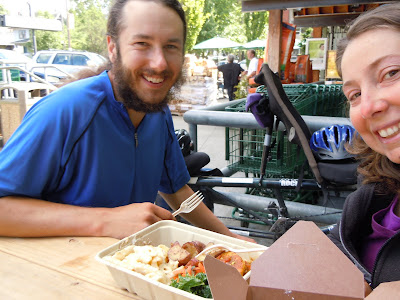 A silly picture of us about to eat some food.
We explored thrift stores (Jenny found two shirts for biking she liked!), the beautiful test rose garden, climbed a really fun, windy, steep hill (and got to go down the other side!), and passed by the back side of the zoo. We saw LOTS of other bikers and one man gave us directions that were really helpful. We used bike lanes, bike paths, and bike routes, as well as “normal” streets. But, the most exciting thing was yet to come. 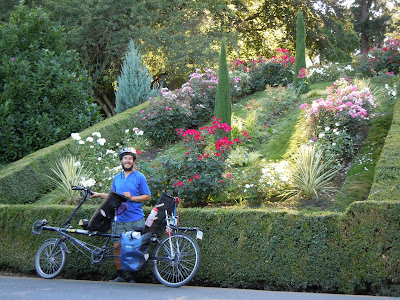 Near the entrance to the test rose garden. 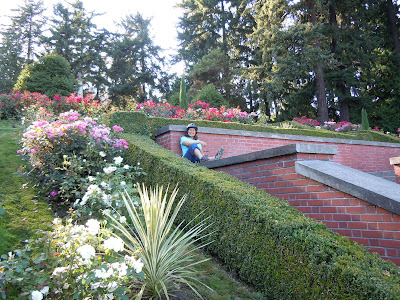 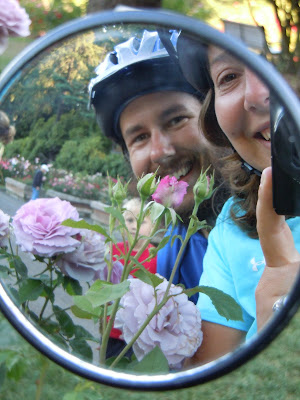 Another mirror shot with the two of us, the roses, and a cute little kid who jumped in the photo at the last minute. He was very curious about our bike and had lots of questions. 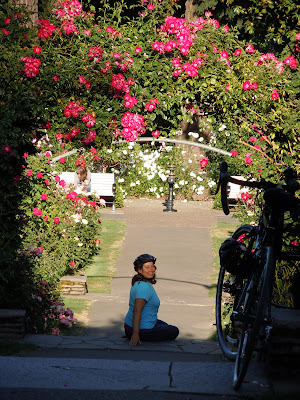 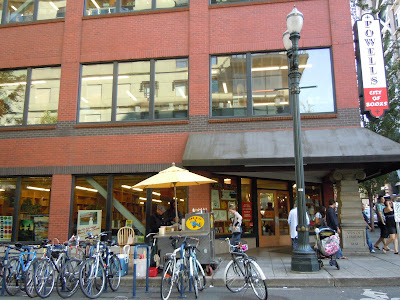 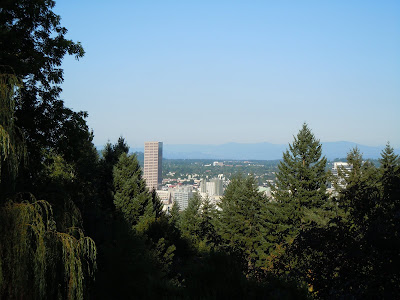 A view of Portland from the top of the hill where the rose garden is.
We were pedaling along up a gentle hill when Jenny cried out, “Figs! Figs! I saw some figs!” We stopped immediately, and parked the bike. Jenny had spotted a large fig tree with figs that looked ripe!The tree was on the side of the road, sort of along someone's driveway, but it was clear that it wasn't being picked, and it was well away from a yard or a house. 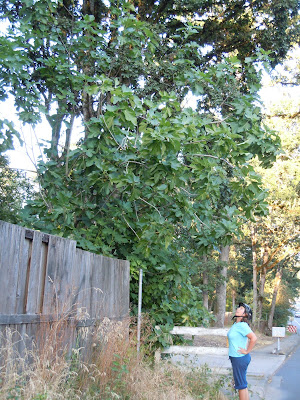 Figs!! There are figs up there!
The more we started to look, the more ripe figs we found! Jenny loves figs. In Florida, her Papa grows lots of fig trees. If we are lucky, sometimes the fruit is ripe when we go to visit. That is pretty much the only time that we get to eat fresh figs, making this find all the more special. Unlike the kind that Papa grows in Florida, the figs we found were the yellow-skinned Calimyrna variety. We filled up a bag with as many as we could reach. 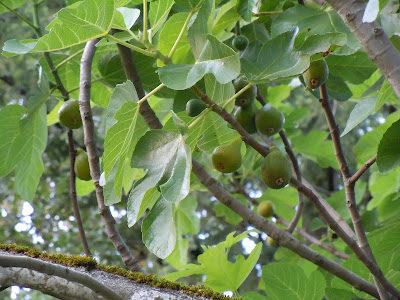 There were so many to be picked. If we'd had a ladder we could have gotten even more. 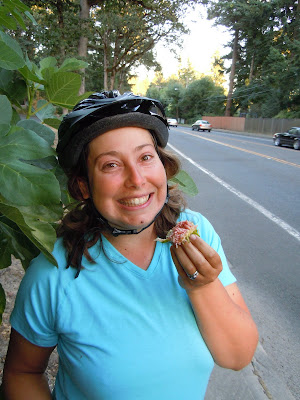 Yum!
Excited about our incredible fig find, and the miles of downhill most of the way back to Eddie's house, we were in great moods. It had been a lovely day of exploring the city and we felt rejuvenated and hopeful about tomorrow and the possibility of making it to the Pacific Ocean. We had biked all the way from the east coast to Portland, Oregon! Amazing. In a way, we felt like we had completed our trip today. Now on to part 2: The West Coast and Beyond! Back at Eddie's, Jenny cooked up some tofu, Brussels sprouts, and pasta for dinner while Brett and Eddie got in a few more games of Scrabble.

We should explain for those of you who don't know, that Brett is very involved in the competitive Scrabble scene. He co-runs an organized club that meets weekly, he plays in tournaments, and he even runs tournaments. Eddie was the director of the first Scrabble club Brett went to, in Exeter, NH. The last time Brett and Eddie had played before now was when Eddie was closing in on “expert” while Brett was a raw novice. Since Eddie hasn't studied in two years, and Brett has gotten significantly better in the same time, all seven games they played were close and fun.

The first game went to Eddie, because although Brett closed with a bingo, he lost 20 points from going over the time limit. The second game was a lower-scoring affair until a few turns from the end Brett played EXTERNAL (to the L, the T was a blank) for 80 points, which gave him the game. Eddie won games 3, 4, and 5, although in one of those games Brett was particularly proud of finding an 88-point bingo holding the tiles AGILRSZ, through an E on the board. The second night while Jenny was cooking a delicious dinner, Brett beat Eddie twice. In the first of those, Brett scored 428 points. A fun word from the last game: Eddie played DHOOTIES. It's good.

Thanks Eddie and Beverly!! We enjoyed your company, your hospitality, and the games of Scrabble! 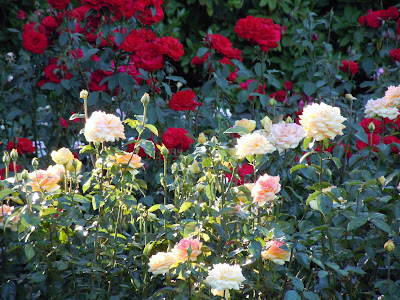 One last picture, of more pretty roses. There were so many!
Posted by Jenny at Thursday, August 19, 2010