Brett cooked an amazing breakfast this morning: potato chicken coconut curry soup. It was one of the best breakfasts we've had on this trip. When Jenny finally emerged from the tent to join Brett at the picnic table, he was wearing a very large smile and looked quite pleased with himself. “You look so happy!” Jenny told him. “Yeah! I'm cooking!” was his response.

It was another beautiful day to be on the coast of Oregon today. The temperature never got too hot, yet it wasn't too cold; we had clear blue sky above us, and the wind was behind us for the fifth straight day! We still wore an extra layer at times, and one of us perspired a bunch up some hills in the sun, but we're certainly not complaining!!!

The dew falls heavy around here, and when we got up, everything outside was covered in water droplets. We slept well, so we were in good moods as we let things dry out and took our time getting ready. Jenny did a bunch of typing while Brett did some cleaning and packing. A few of our electrical devices also got some charge this morning. 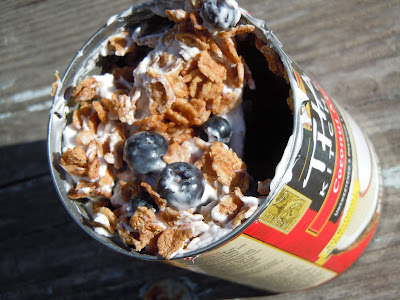 A snapshot from our morning of what Brett ate for a quick second breakfast before breaking camp.
As we left the campground and turned back onto Route 101, we wondered if we might see some of the other bikers today. Just as we were making a guess as to whether Joe and Giana might be in front of us or behind us, Brett spotted them in the mirror! They had already come almost 20 miles from Humbug Mountain State Park. The four of us rode together through a beautiful stretch right near the ocean until we neared the bridge just before Gold Beach. When we stopped to take a photo, they pulled ahead and we wouldn't see them again until the evening. 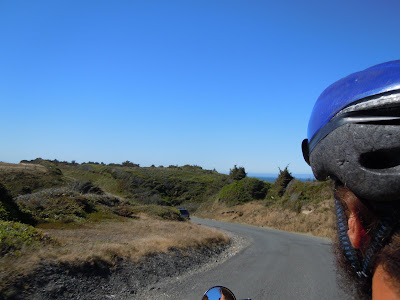 We loved this small winding road right along the coast!
We were so caught up with biking after we crossed the bridge and pedaled into the town that we forgot to look for the store we had meant to find to get fuel for our stove. Brett asked at the grocery store, and was told that the Fred Meyer in Brookings might have some, and if not there would be a Walmart in Crescent City, CA. 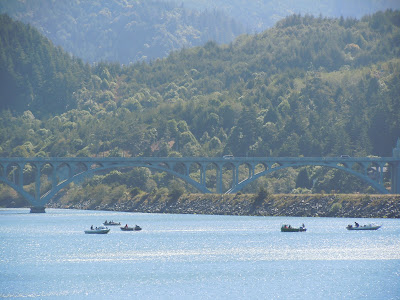 Looks like a fishing derby in the Rogue River, with the long, flat bridge we were about to cross in the background.
California! When we left this morning, it was about 42 miles away. We were really excited to try to get there and sleep in a new state, but we've been so happy with Oregon that it's hard to want to leave. But up first, we had some beach to explore and then a hill to climb.

Ever since we hit the coast, we've been talking about dipping our tires in the Pacific Ocean, in the tradition of many cross-country cyclists at beginning and ending points. Our route isn't really from ocean to ocean, but we still wanted to do it. Most beaches haven't seemed narrow enough to bother trying to get the bike across all the sand to them, or else they are down a steep cliff. Just south of the busy part of Gold Beach we found a Visitors Center with beach access that looked just right!

We drove down into the parking lot, then along the short path to the beach. The last few feet of the path were sandy, and we had to push a good bit and it was hard to steer, and then we were on the beach. We struggled for several minutes to get the bike the seventy feet to where the waves were washing up. Brett edged the bike into position while Jenny set up a time delay shot with the camera on a piece of driftwood and a pebble. Click! 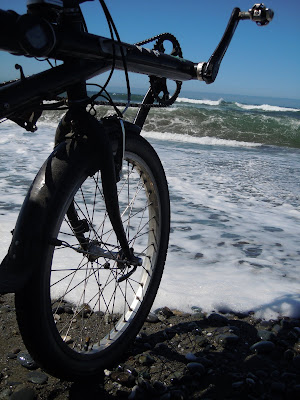 Jenny documents the wave and front wheel meeting.
But then things got a little less fun: a bigger wave came before we got the bike turned around, and Brett's shoes and socks got soaked, as well as the part of the bike's wheels. Oh well. So much for simple pictures and staying dry. After that, we got the bike up out of the way of waves, took off our shoes and looked for cool stones. We didn't find any agates, but a few nice beach stones nonetheless. There were so many cool stones to pick from, and many with stripes or lines. 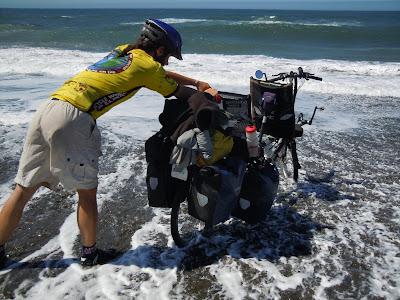 Jenny documents a more dramatic wave while Brett tried in vain to stay out of reach while holding the bike.
Before we left the beach, we asked a family if they would take a few photos of us with the bike, so we have a few more moments captured by the camera, and that was fun. We weren't in the best of moods, though. Brett's shoes and socks were a mess of wet sand, plus we were having trouble communicating with a tenant back home. It's tough to be present in the moment when you're trying to solve things back home. We like solving things back home, it's just hard to switch back and forth smoothly. Later today we spoke on the phone and resolved much of the stuff that had come up, and made plans for some of the rest. 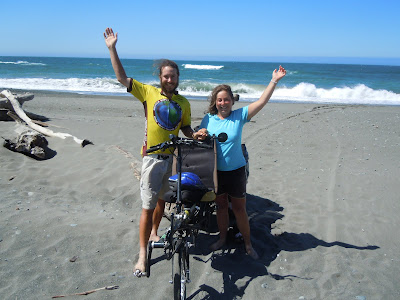 Two barefoot travelers, happy to be along the Pacific Ocean after so many miles across the continent!
After sitting around a while in our funky mood and all the pictures at the beach, we wiped off the rims of the wheels and headed on. Brett chose to wear his Keen's instead of his wet and sandy bike shoes. He is used to riding on the small “clipless” pedals back home in any kind of footwear, so it wasn't too hard for him. Jenny was hungry, and we decided we'd stop at the next place to get lunch, since it was a little after 1:30. 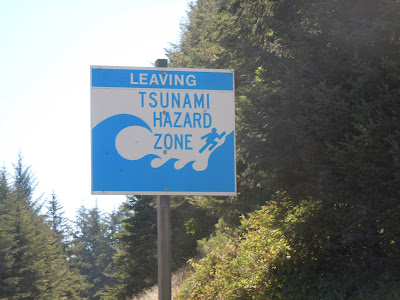 We see these signs a lot around here, and we think the pictures look hilarious, even if the topic is a serious one.
Unfortunately, the town was behind us and with it all the restaurants, and the hill was ahead. We hate backtracking, so we just went for it and started up the hill. We'd been eying the hill on the maps with other bicyclists for days, so we'd built it up quite a bit: “The big hill just past Gold Beach.” Just as we started to really climb, a woman caught us and then pedaled by after quick hellos. We tried to keep up with her, as we do really well in that situation. She was pretty fast, but she took breaks, too, so we kept her in our sight most of the way up the hill that ended up being not that long, and never terribly steep. It was only a mile or two up to where it levels off a bit, and with someone ahead of us, we were up it in practically no time. Jenny kept wondering when it was going to “go up.” 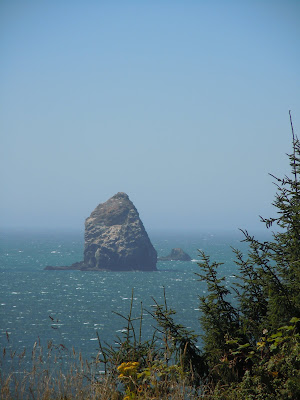 You can see by the white on the water that it's a bit windy, but so beautiful!
So, we had pictures from the beach all taken, even if we want different ones later. We had the hill climbed. It was only about 2:30, and California was looking so close! We absolutely flew down the south side of the hill, with the wind behind us but also swirling a bit. It was scary at times, but we enjoyed our super high speed of 45.6 mph! As we reached the bottom, we spoke a few minutes with the woman who had passed us and was now photographing the amazing seascape before us. She was nice, and we offered to take a few pictures of her with her camera. She accepted, and we found out she also is headed to San Francisco. She had already done 88 miles today! We were a little jealous. 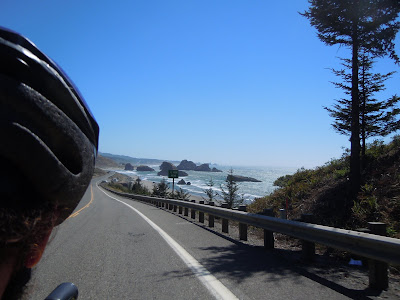 The downhill was long and fast! Here we are, almost at the ocean again.
We were still hungry for lunch, but when we realized we'd biked past the turns for Pistol River just to the east, we decided for now just to consume some of the many snacks Brett's mom sent us in the package. We also om nom nom'ed some more of the delicious blueberries we picked yesterday. Yummmm! 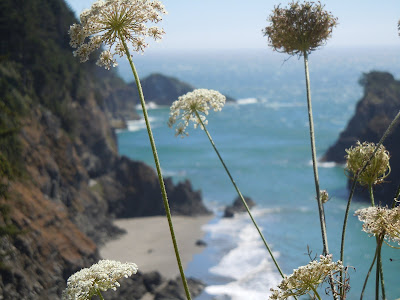 Queen Anne's lace.
The views of the ocean for a while after that were incredible. We saw so many large rock formations in near the beaches. We saw arches with the sun reflecting on the water underneath. We saw pristine beaches all over the place. Maybe this will be our favorite part of the trip. The good weather sure doesn't hurt! 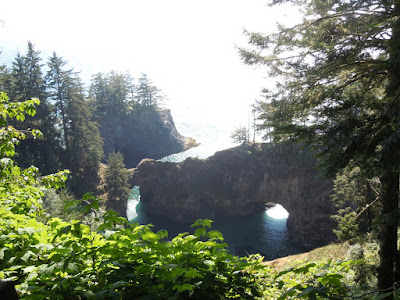 Somewhere near Cape Ferrelo we took a short walk through the woods down a path to look at these beautiful arches. 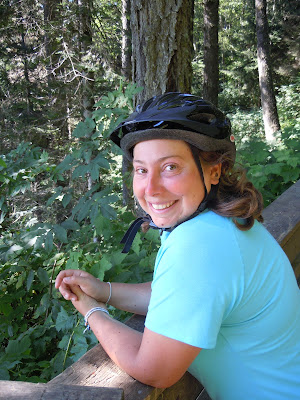 The short walk through the woods was the perfect break. 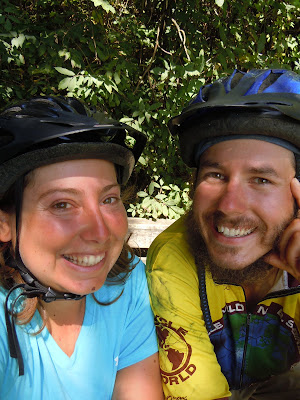 We look so happy.
We made it into Brookings around 5ish, and were really ready to eat a meal. Brett steered us into the Fred Meyer parking lot to get fuel, but we were so hungry we ended up eating prepared hot foods there rather than go anywhere else. This is also when we ironed out stuff with a couple tenants back home. The food was okay, and taking care of business felt really good, but now we were drained and it was after 7. Brett grabbed an over-priced and under-sized cannister of fuel (yay), plus a couple oranges to juggle to help him relax at the campground, and then we (gasp!) backtracked the mile and a third to the very nice Harris Beach State Park. 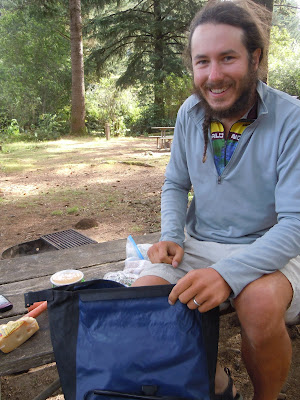 Tired, but glad to be at the nice campground for the night.
Supposedly, this beach has some of THE best sunsets, but we got in just a bit too late, and were bushed anyway. The rest of the place looked nice enough, and you can't beat the price for hiking or biking in: $5/person per night. Thank you, Oregon! (California, you'll have to wait until tomorrow...)
Posted by Jenny at Thursday, August 26, 2010