Every day we seem to be getting started later and later. Today we got out of the tent around 9:00 and didn't leave the campground until 10:20. There wasn't a place in town to get anything to eat, so we ate odds and ends from our food bag on a picnic table in the shade at the campground. We snacked on cereal with rice milk, cheese, hummus, crackers, banana and chips. We estimated more than 21 miles of biking to the town of Big Timber, where we would be able to stock up on supplies. 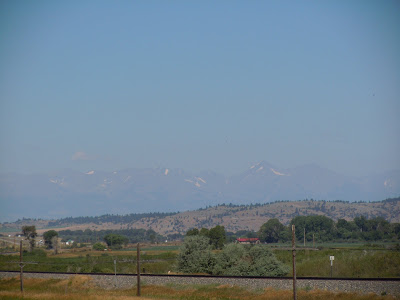 Every day, the mountains get closer!
The temperature was cooler today for a change, probably in the 80's instead of the high 90's, and we noticed the difference right away as we set out on Highway 90 west. Biking on the highway was loud, but not bad. It was a clear day and we had a nice view of the Crazy Mountains off in the distance. We could see what looked like snow near the tops of peaks! 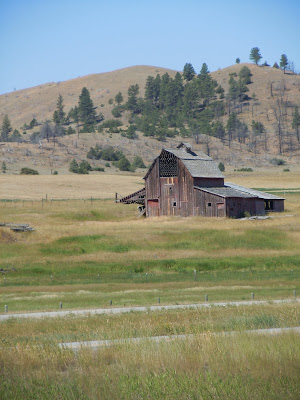 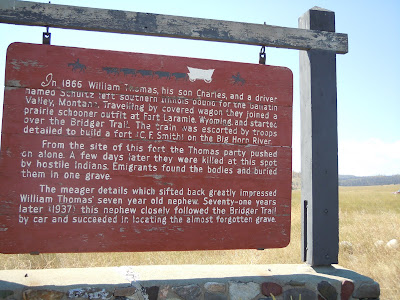 Another sign.
The wind was against us this morning. Usually, the wind is a minor factor for us, but today it was much more of a problem. We even saw a sign that said “HIGH WIND AREA” and they weren't kidding. We were really crawling along, to the tune of about 6 mph unless we happened to be going downhill. We managed an average speed in the high 7's for the morning, but it wasn't pleasant. 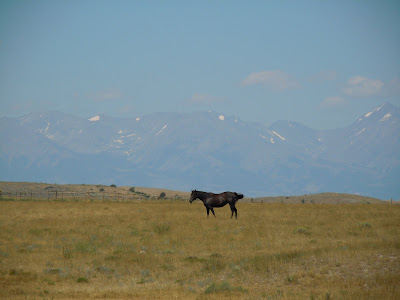 It was a windy morning, but the views were beautiful.
After a few breaks and a lot of pushing, we made it to the town of Big Timber. It wasn't quite as big as we expected, but it would suit our needs. We realized that we were looking for prepared food for a change, and would wait to stock up until after the mountain pass, going on just a few things.

The mountain pass! We have been hearing about the mountains since we got into Montana, and we are a bit nervous, but also very excited to finally get our chance to climb! Still, in order to make sure we climb the pass with enough energy and time, we want to get as close to the pass as we can the night before. That meant that today's plan was to make it to Livingston, the last town east of Bozeman Pass (elevation 5712 ft.). 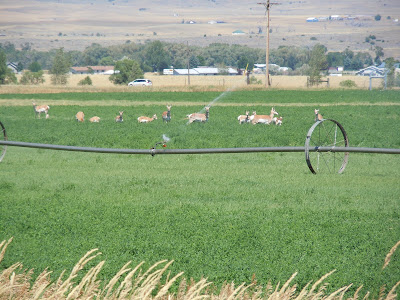 These deer knew where the grass was greenest. 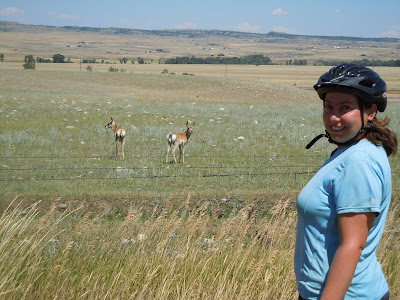 They weren't very shy.
In Big Timber, we just split a sandwich and a personal pizza from a deli. We were really excited to find some of the juice we really liked that we have only seen one other time, in Marmarth, ND. For the record, it's Ocean Spray's pinapple/peach/mango juice that we love. We enjoyed the air conditioning and the tables inside for a while. Jenny did some writing, and Brett did some editing. We both just relaxed. 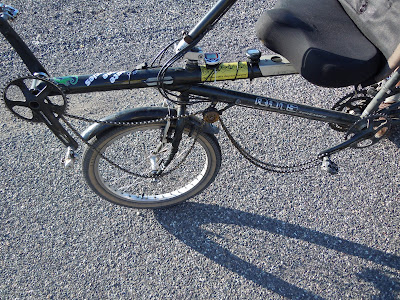 The timing chain that connects Brett's pedals to the rest of the drive train fell off today! We went over a cattle guard and it jumped off. It was easy enough to put back on, but it was a little strange we thought.
Before we left town, we did one other cool thing. For about a week now we've been singing Bill Staines' “Prudhoe Bay.” Actually, we've been singing what we can remember of the lyrics. We know some parts well, but some parts are unintelligible syllables except to Jenny, and we crack up laughing every time she sings those parts. Brett had the brilliant idea to call Jenny's papa and ask him to email us the song file. After singing enough of the lyrics for Papa to figure out which Bill Staines song we were talking about, he did email it, and minutes later, before we even got off the phone, we were listening to it on our computer thanks to a motel's free wifi! Technology is crazy sometimes. 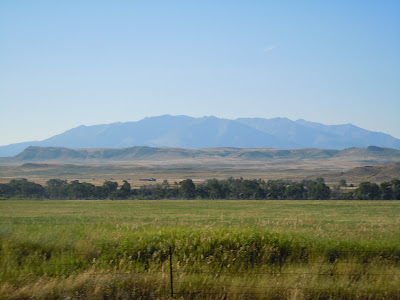 We can't wait to get to the mountains.
Just as we were heading out, we got a text back from a tenant who had a bunch of things to talk about. We were on the phone for quite a while, but made some progress on some issues and made a plan for the others. This felt really good to do, but we were already itching to go, since we had so far still to ride. Earlier in the day, we'd also had a conversation with a different tenant, letting us know that we'll probably have to find new tenants for that apartment as of September 1st. It's a lot of stuff when we think about it all at once, but each piece can be done, either while we're away or when we return home.

At last, we pedaled out of Big Timber. Just as we were about to get on the highway, we decided to try the parallel secondary road again. Once again, it was the right choice, especially since we were eager to talk to each other about the issues back home and the highway is pretty noisy. Our tandem is great for that, and sometimes we take it for granted, but we are really glad about our choice to ride this bike. It's so much easier to communicate on the tandem than between two bikes and two air streams. Talking always makes the miles fly by faster, too, so before we knew it, we'd gone several miles and were going much faster than the morning! 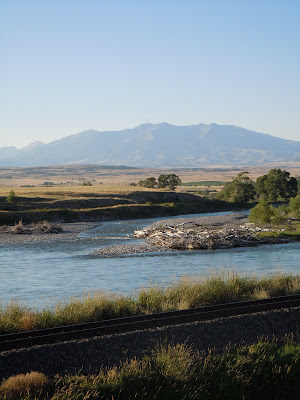 Another snapshot of the afternoon. 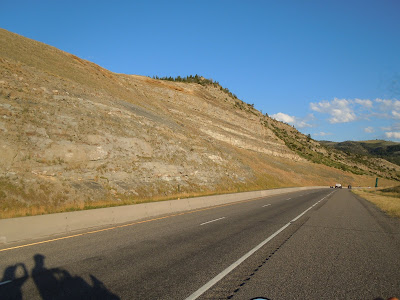 Shadows.
In fact, the whole evening was much faster and more fun than earlier in the day. For the second day in a row, we raised our average speed significantly after lunch. We ended up back on the highway at some point, but that didn't diminish our speed. The mountains started to be on three sides of us instead of just ahead in the distance, and the views kept astonishing us. Jenny took many, many, pictures from the back of the bike, and sometimes we'd stop and both take pictures. We want to remember it all as best we can, because this kind of trip is likely a once-in-a-lifetime thing. 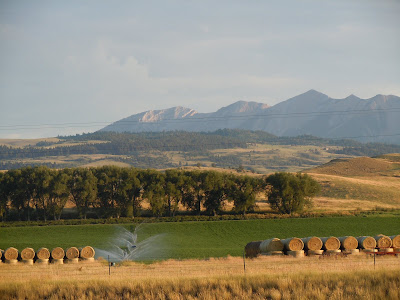 Everything that is green around here gets watered.
Evening was falling as we neared Livingston, but we knew there had to be some kind of camping there. We got off the highway and took the smaller road into town, and now it was dark. We got a few food items at a gas station and asked two different locals about camping. We found we had a couple of choices: fishing access right near downtown, KOA south of town, or some other private campground “just before the pop stand.” We never found out what the pop stand was, but we did find the private campground that we guessed would fit our needs best.

We started setting up in the dark when the manager came out and greeted us. She may have charged us a little less than usual, we weren't sure, but either way she kindly told us which electrical box had the working 120V outlets. Plus, we were glad to use some of the strongest Internet we've found yet. It was late, but we still posted a blog entry before brushing our teeth and going to bed.
Posted by Jenny at Monday, August 02, 2010