Today didn't start off as nicely as the past few. Jenny did gather a few more nice pebbles from the beach, and Brett did write more for the blog, but our moods were low for whatever reasons, and we didn't finish striking camp until 11:30. When we did leave, we were hungry for pizza. 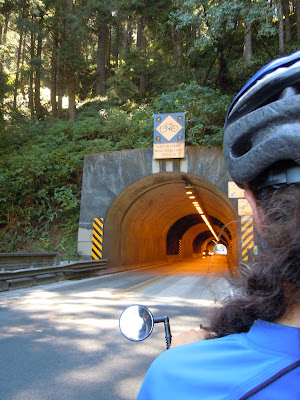 Our first tunnel on the coast. It even had a flashing light announcing bikers! 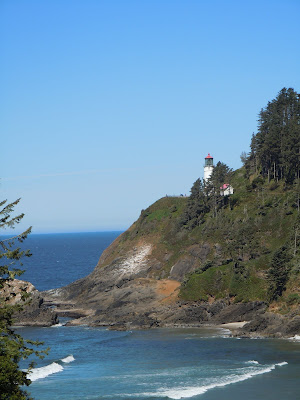 Heceta Head Lighthouse.
In Florence, we found a Fred Meyer store, but we forgot our mental shopping list and just got a Lara bar and vitamins. We wanted to get fuel, among other things, but we aren't out yet. Further on in the town that shares its name with our hometown, we found a pizza place, and we ordered up a whole pizza for ourselves. 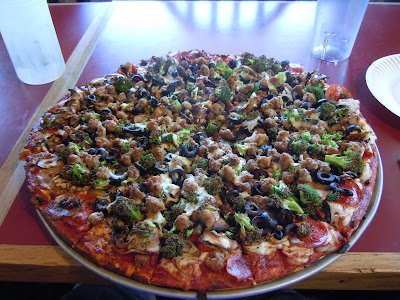 This pizza was SO good.
That pizza was great! It satiated our hunger, and lightened our moods. We also felt good about posting two more entries to the blog with a wifi signal from the hotel across the street. We really want to catch up before we fly home. Before we left, Brett called his parents while picking blackberries in the parking lot and Jenny called the airline company to find out if we could fly standby or move our ticket up a day or two sooner. We're not there yet, but it seems like we're making good time and might get to San Francisco a bit early. Delta doesn't allow anyone to fly standby anymore, and it would cost a bunch to move our tickets, so September 7th it is! 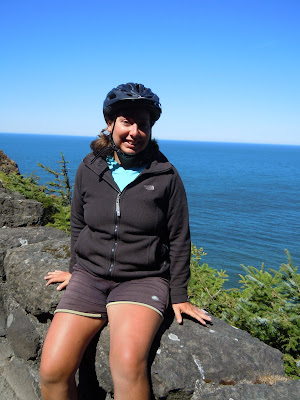 Jenny takes a break from biking to enjoy the ocean views and to pose for a picture.
Riding out of town, we weren't really feeling very much in the spirit of pedaling. We did pass the place that many, many cross-country cyclists begin their journey on the TransAmerica trail (also mapped by Adventure Cycling). We rode for a while, but then we turned into a park because we wanted to see some of the great sand dunes before we left this unique area of Oregon. It ended up being a big downhill into the park, and we dreaded climbing it later. The park didn't offer any good camping, plus the price was $20 (not the $5/person we have become accustomed to recently). 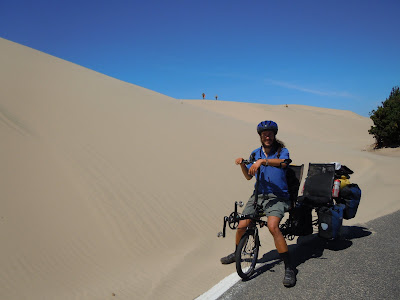 Sand dunes!! (These were encroaching on the Fred Meyer parking lot.) 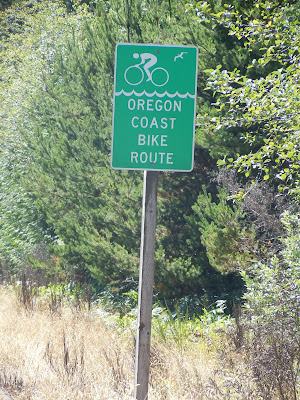 Bird chasing person with hula hoops?
Maybe it was hunger that was making us grumpy, because it had been a while since the pizza, and when we stopped to eat a snack before we climbed back up the hill to get out of the park, it helped our moods greatly. After munching on apple and peanut butter, carrots, and a banana, the hill wasn't as bad as we feared and we felt better in general. 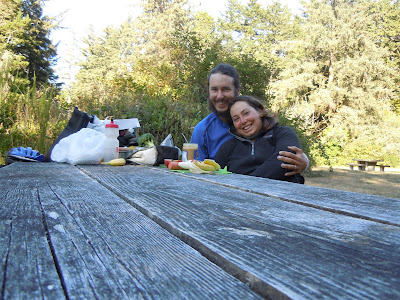 Our snack spot. It was a little chilly, so we cuddled close to stay warm.
All day, the temperatures have stayed cool or even chilly while in the shade, but fairly warm in the sunshine. This is okay, but it's a little hard on Brett who has to keep adding a layer for downhills and taking it back off again as soon as we're climbing or in the sun. He finds it frustrating. Another thing we dealt with today was the terrain, which was a bit hillier. Our average speed reflects that. 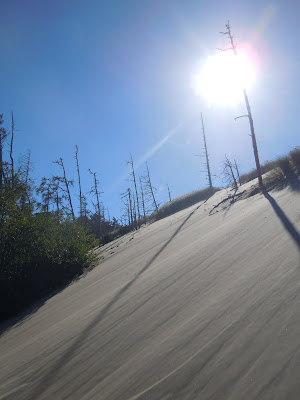 An artsy sand dune shot.
We found another campground that we considered staying at until we realized that it also cost $20 and seemed to have no shower facilities. So, onward we pushed in the late afternoon, looking for a better spot. We had to climb a big hill, but then we got to go down the other side. The downhill put us in a town that was somewhat like a ghost town. It seems to once have had a larger population, possibly from a factory, but is now quiet and small. 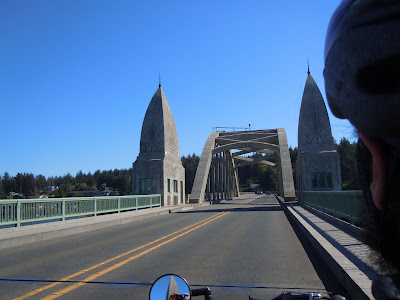 We love all the bridges we get to cross.
Evening was falling, but the full moon was rising, and we got some beautiful photos by a bridge. We were reminded of our night in South Dakota riding by the light of a full moon. It's really neat to think back on something that was a month ago, but is strangely also a part of this amazing trip. 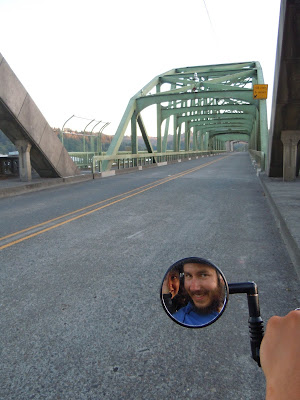 Playful shot of us approaching another bridge. 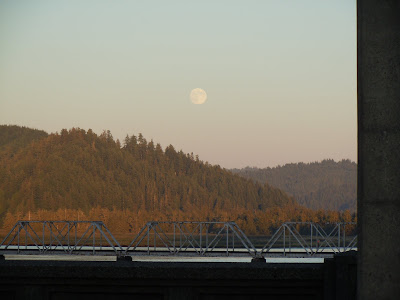 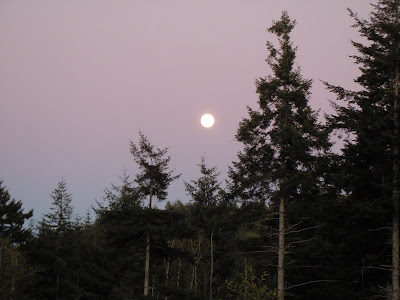 Two moon photographs in the early evening.
Passing through Reedsport, we remembered to grab one of the supplies that we had meant to buy earlier: matches. We aren't out of fuel, but we were out of matches! It was getting dusky by this point, and we continued on, knowing from our map that several camping options awaited us in or around Winchester Bay.

Jenny saved us considerable extra work when she realized that the map didn't tell us to turn off of Route 101 as we'd thought. We got to check out one of the camping options (not so great) before we realized our mistake, but we weren't far off course and quickly got back on track. Up one more significant hill, and then we got to turn off the main route to a nice state park campground: Umpqua Lighthouse State Park. 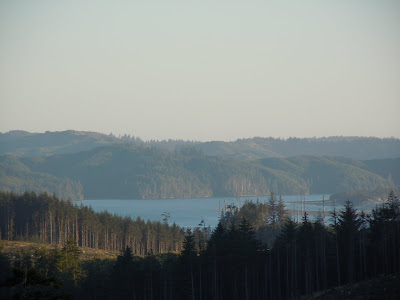 Evidence of the ever-present logging industry.
There is a steep downhill to reach the campground from the main road, but it was dark by now and even though we weren't looking forward to climbing it in the morning, that's something we'd just leave for tomorrow. We put our payment envelope in the slot, having paid for two people in the hiker/biker area, a total of $10. But when we got to the hiker/biker area, it was clearly both smaller than the corresponding areas in previous parks we'd stayed at and more full.

Instead of trying to squeeze into the small area in the dark, we decided to go in search of an empty regular campsite. Further downhill, we found something better than an empty site: we found fellow touring cyclists who had also found the hiker/biker area full! The three young men were busy roasting chicken, and cooking mac and cheese, all over a fire pit. They happily welcomed us to their site.

Henry, Brandon, and Charles(?) were excellent to talk to and we shared a few things before turning in for the night. Once again, the showers weren't hot at all for us, and we were mightily disappointed. We were tired, and after a snack and brushing our teeth, we went to bed in our nice warm tent, listening to the sound of a fog horn in the distance. 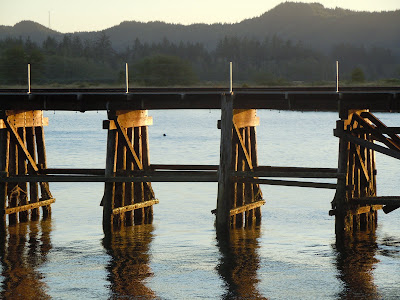 An old and unused train bridge outside of Gardiner.
Posted by Jenny at Monday, August 23, 2010