The rain poured down most of the night and everything was soggy when we got up at 6:45 this morning. There was mist over the mountains giving the morning a cool, quiet feel. Since our picnic table was all wet from the rain, we moved into the club house building to eat some breakfast and answer some email. The eggs we cooked this morning didn't come out as well as the last time we made them, but it still gave us something to eat. We stayed around long enough to let things dry out, and wrote as much as we could during that time. 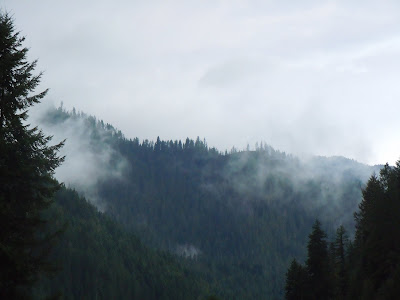 Mist over the mountains in the early morning.
When finally set out biking for the day, we had to remind ourselves that it wasn't a race. Bob and Linda had gotten going a little ahead of us, maybe by 15 minutes, and we found ourselves pushing hard in an attempt to catch them up. After talking about what we really wanted out of the day, we realized that slowing down and enjoying the day, each other, and the beauty around us was a better idea than racing to catch people. Plus, there were so many blackberries to pick and eat!! 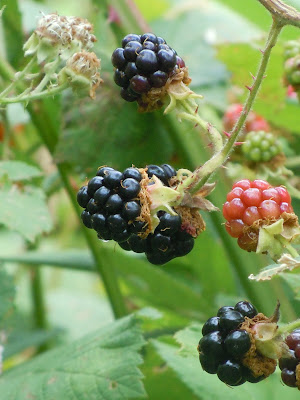 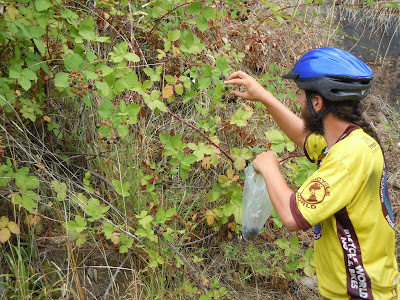 We stopped several times to fill up a bag. 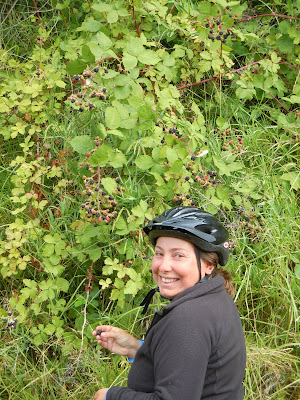 The blackberries were so sweet and ripe and delicious!
The first bunch of miles were still downhill, much the same as the day before. The place we camped was also known as Three Rivers because the Selway and Lochsa Rivers come together to form the Clearwater River. So now we followed the Clearwater River downhill through the twisting valley, headed generally southwest. We planned to eat lunch out when we got to Kooskia, so when we got there we had to make a choice between a few different establishments. We chose to go with Chinese food, which ended up being good at a reasonable price.

After lunch, we wanted dessert and some Internet access, so we walked up the street to a cafe. We each got a sweet treat. Both the chocolate cake and the orange cream cake were tasty, but filling! After using the computer some, Brett went across the street for some quick grocery shopping while Jenny finished with the computer and paid. Brett came back pleased with his purchases that would supply us for the next few meals. 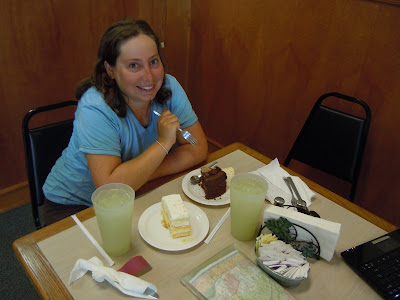 Cake!!
Then we were away, heading back to Route 12 which mostly goes west at this point. This area is part of the Nez-Perce Indian Reservation, though you'd hardly know anything was different except in the towns where the culture seems just a bit different. We weren't moving slowly today, but not overly quickly either, so we had plenty of time to enjoy our surroundings. The dense evergreen forests gave way to more barren landscapes that reminded us of Montana. But here things were different, because there were always at least some trees, and along the roads some of them were fruit trees! The fruit wasn't quite ripe yet, but we hope to find more fruit trees with riper fruit in the next few days as we get into Washington. 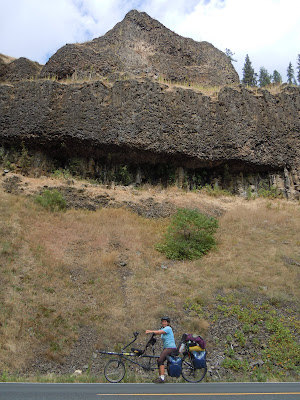 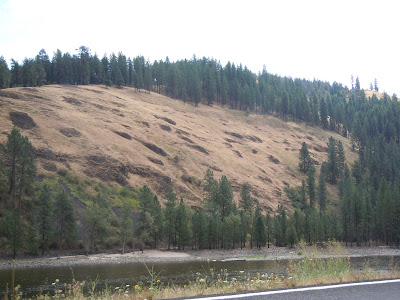 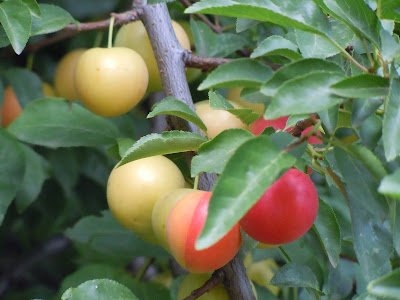 At first we thought these were Ranier cherries. Upon further inspection, we think they are actually small plums. Either way, they weren't quite ripe. 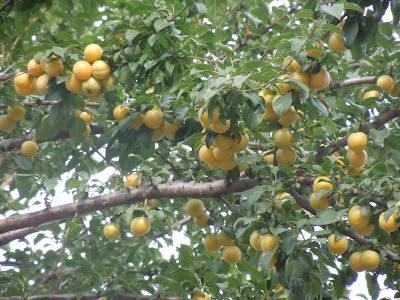 These weren't quite ripe either.
Finding a campground that we wanted tonight was an adventure all in itself. We were headed toward Orofino, and moving along pretty well. As we got to Orofino, we saw an RV park, but it was just pavement and cement! We asked some teenagers in a park about campgrounds heading west and heard there was one a bit west of town. It was dusk as we were leaving Orofino, but we figured we'd be to our spot soon. 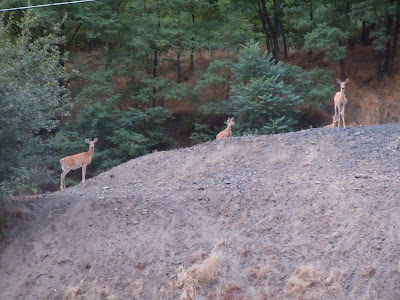 We saw lots of deer today.
We had to ask at least one more time about the campground we were headed to, and it was quite dark by the time we actually pulled into the park. It was a self-pay system, but there was an active host who helped us find a site for our tent. There was another touring bicyclist there, too, but he was already asleep. We were very tired and it was starting to sprinkle, so we silently, but quickly set up the tent and went inside for the night. It was hard to get to sleep, especially for Jenny who was a little over tired. 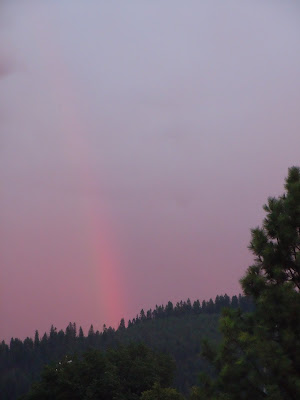 We turned across the bridge into the town of Orofino, which wasn't actually where we wanted to go, but when we turned around, there was this beautiful rainbow behind us. We probably wouldn't have seen it if we hadn't gone into Orofino.
Posted by Jenny at Tuesday, August 10, 2010