Some mornings we wake up groggy, and making the move to get out of the tent is hard. This morning it may have taken a little competition, but after waking up at 6:50 we were gone from the campsite by 7:30! Jenny let the air out of our mattresses, and we raced out of the tent (“Last one out's a rotten egg!”). We used the bathrooms and filled our water bottles, but we were still out of the campground gates before 8:00! 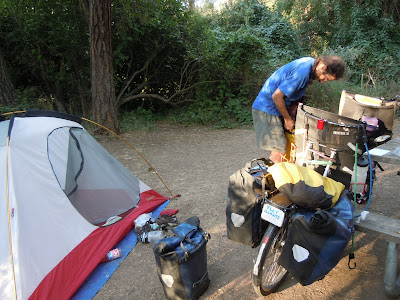 Brett packs up. He won the race out of the tent, but only by mere seconds.
We stopped after a few fast miles at the White Stallion diner for breakfast. It was decent food, but a little pricey for what it was. After another easy bit of downhill into the town of Waitsburg, we turned south and began to climb right away. Before we left town, we really wanted to find a free wifi signal. It only took two tries, but Jenny can sometimes tell which neighborhoods might have enough houses, and one is bound to be unlocked. The second neighborhood did the trick, and we got to read lots of great comments on the blog. They were so sweet, thoughtful, and inspiring! 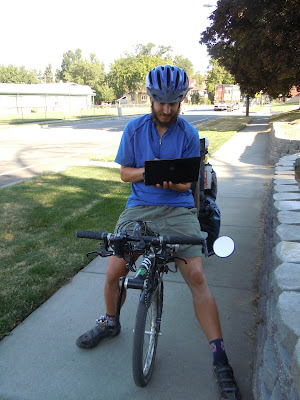 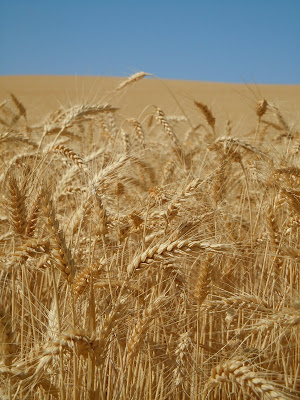 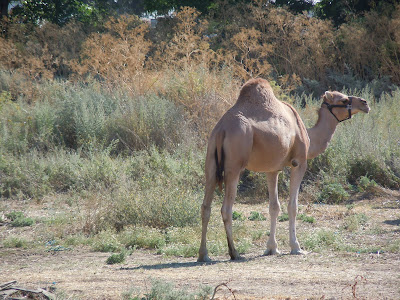 That's not a cow... or a horse... or a deer...
We biked past many wheat fields this afternoon as we approached Walla Walla. We were hot and cranky, and looking for a shady park to rest up in. It took us a long time to find one, longer than you might think. Some sandwiches from Subway helped us a little, but really we just needed to rest. Sometimes it's so hard when we don't have our safe and quiet house to relax in. Finally finding some shade and some grass in a little park, we rested. After a few hours there, we felt ready to push on some more, though we talked about just finding a hotel in town and calling it a day. 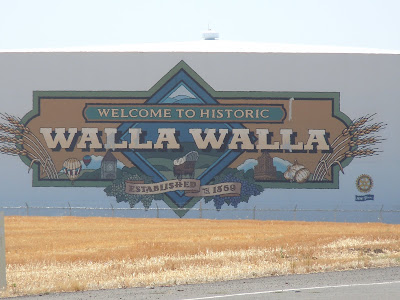 Walla Walla had a very large welcome sign.
Even though we knew we wanted to continue west, finding our way out of the city wasn't as easy as that since we had gotten good and lost finding the park. We asked directions at a grocery store (where we bought a few different drinks to perk us up), but the young clerks were completely unable to give us directions. A nice man outside was helpful and calmly gave us two choices of where to get back on Route 12. It took us one more time of asking after missing a turn, but we did get to go through a triple rotary! There were three rotaries in a row all flowing in to the next! Fun!

Once on the highway it was very windy, but it was partly behind us and we felt like we were zooming! Pedaling the easy 20 miles to Touchet (the locals pronounce it Two-she), we stopped at a convenience store to get some cold water and a few other food supplies for the evening. A local man, in the store to get his ginormous refill of soda (we later affectionately nicknamed him, “soda man” and would refer to him as such many times that evening), overheard us asking about camping in town, and he suggested next door by the school before he remembered that there wouldn't be bathrooms there. Then he told us about an RV park 4 miles further on, “down by the river.” 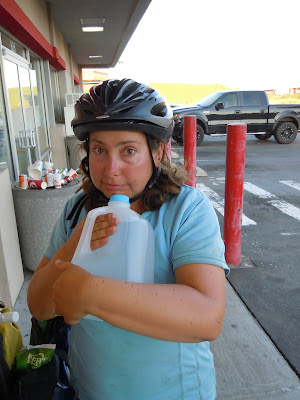 Jenny was really hot and thirsty by the time we reached a place to get some cold water. She was so glad to have it. 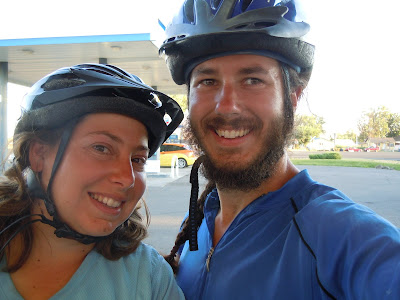 Us, happy after we've had some cold water to drink. 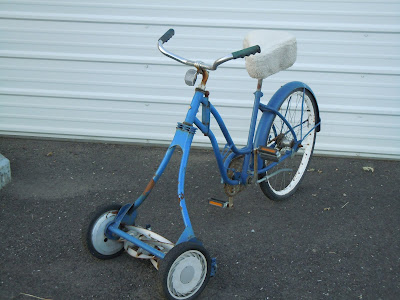 On our way out of town we spotted this neat contraption.
Well, let us be the first to tell you that four miles west of Touchet takes you almost to the top of a large hill. It wasn't quite as big as yesterday's unexpected climbs, but we were pretty mad when we got to four miles and there was nothing and no one in sight. We had no choice but to pedal on, but we made many unkind references to the “soda man.” When we say there was nothing around, we mean there were big fields that stretched beyond seeing, and not much else, and those fields were not green and inviting, they were brown and golden. No trees to speak of. 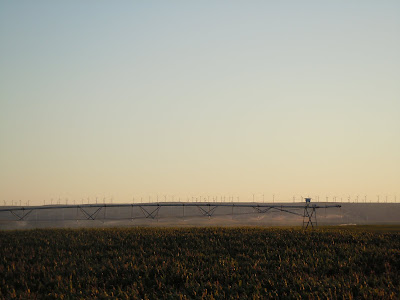 A whole lot of wind turbines off in the distance.
The sun was setting, though it wasn't nearly dark yet. We spotted a sign that advertised lodging to the right, down a hill and then up a hill to a large mansion. We were pretty tired and called 411 just to get the number for the establishment that turned out to be full. The woman said if she hadn't been full, she would have cut us a “really good deal” from her usual rate of $240 per night. Yeesh.

As luck would have it, our campground, and likely the one soda man spoke of, happened to be just around the next bend, only 9 miles past Touchet. It was only 99% dark by this point and we were glad to find an empty spot to set up our tent on nice green grass. Brett talked to the owners of the park, who came over while Jenny was finishing the last of the set up inside the tent. They were very friendly and curious about our trip. It's still fun to tell people about our travels, even after all this time! 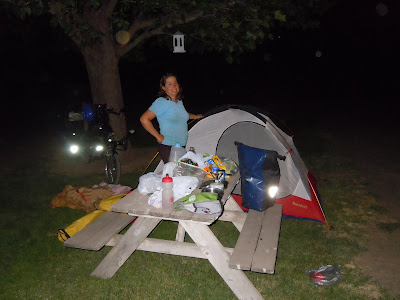 Our stuff all spread out in the dark. We were so happy to reach the campground!
Posted by Jenny at Friday, August 13, 2010