Today we biked wicked fast! We started to think that it really was all downhill to the ocean from here. When we woke up in the morning, we had no idea what time it was. Our cell phones didn't work and we knew it was probably earlier than it felt because of the time change. Brett got us going, and it was nice to have an early start.

After we got up and packed up the tent we decided to bike the short distance up to the lodge above the campground, thinking it would be a nicer place to cook breakfast. Plus, they had wifi there. Once up the hill, we chatted with the three fellow bikers, one of whom we met the night before. They are riding the TransAmerica Route to raise money for the National Food Bank. 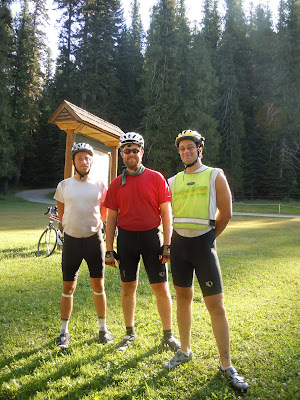 Biking across the country to support the National Food Bank.
Breakfast was quickly cooked and eaten: sausage, ramen noodles, broccoli and carrot. We were eager to be on our way because we had something special planned for today: hot springs! It was only about eleven miles, still following Route 12, to the parking lot for Jerry Johnson Hot Springs. It only took us a short time to bike the miles, but we stopped many times to pick the abundant and delicious blackberries which grew all along the sides of the road. 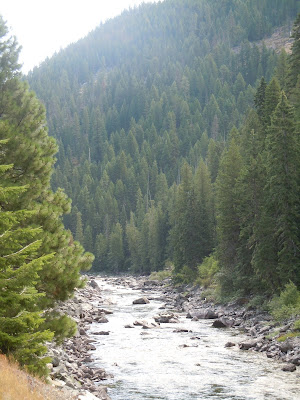 We followed the river all day. It was so shady and cool.
We walked the bike across the bridge and along the trail about a mile, until we spotted the first circles of stones built to capture the hot water running out of the side of the steep river bank. These first pools weren't very hot, although the supply from the bank was too hot to sit under. We enjoyed them a bit, and then moved on, leaving the bike by the side of the path. 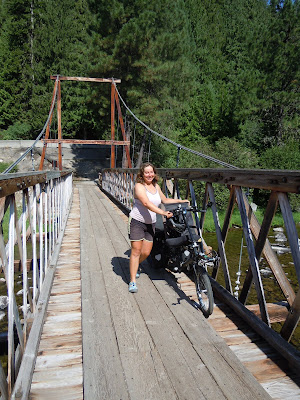 Pushing the bike over the bridge to the path. 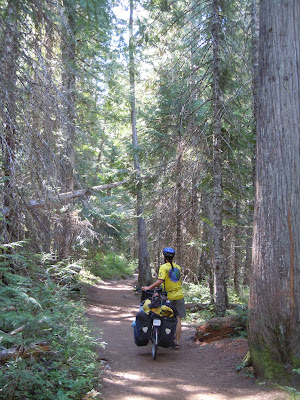 The wooded path was about a mile and a half long. There were many tall cedar trees along the way.
Walking around exploring the other pools was a welcome change from biking. We saw a bunch of different spots, and then picked one to try that was right next to the cold river. We soaked for a while in the shallow but comfortably warm pool, dipping in the river when we felt a little too hot. 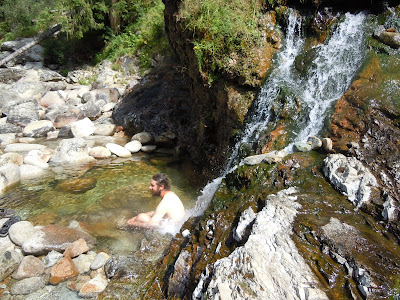 Brett soaks in the first hot pool. The waterfall was hot, but most of the pool wasn't. 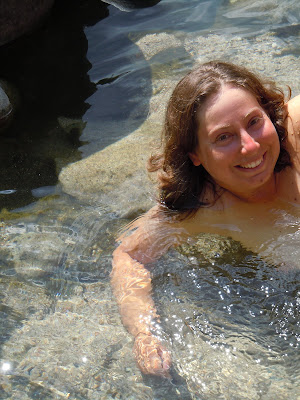 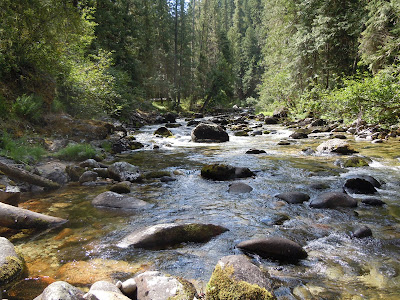 The cold river near the hot springs.
After a while, Jenny spotted several people pointing in the same direction and taking pictures. We stood up, and there across the river was a mama moose and a baby moose! Brett grabbed the camera and got two pictures before the large animals turned back into the forest on the other side of the river. We had wanted so much to see a moose on this trip, as we'd never seen any in the wild. After passing through New York, the U.P., and Minnesota without seeing any we had pretty much given up hope, but we got to see two! 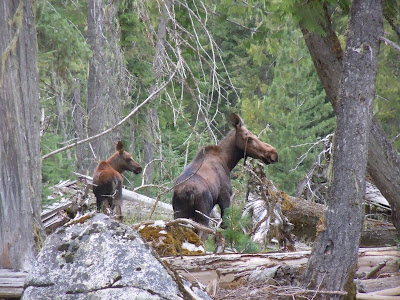 Moose!
We had been soaking for a while, so after the moose we headed back to the bike. We pushed it some and rode it some back to the roadway, very happy with our stop. We continued on our way downriver, following Route 12. It was a gorgeous ride with the river almost always in sight, and the steep, forested hills on both sides making for a wonderful feeling of serenity. Some of the cedar groves we passed through smelled amazing! It was fun to go downhill all day, even though sometimes we felt like we ought to be going faster. Toward the end of the day, we did get going faster, and our average speed for the day (13 mph) reflects just how easy the riding was. 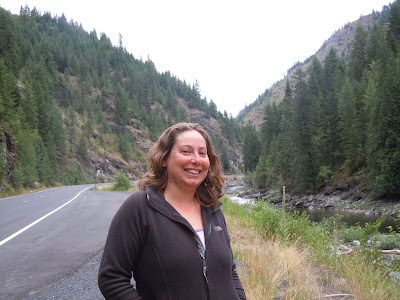 Jenny is happy to be near the river.
A couple of times we stopped for breaks. One break not long after the hot springs was for peanut butter and jelly sandwiches, and a couple others for small snacks (including some chocolate candy bars) or to take pictures. Mostly we just rode down the river, feeling amazed by how beautiful it all was, and marveling at how different it was from the bare, open landscapes of the Montana and the Dakotas. We could feel the cooler air as we passed by streams running into the river, too, and that was fun to notice.

We pulled into Lowell, and it was the first real settlement since the lodge and campground we left from this morning. It had been about seventy miles of trees and river. We stopped a bought a few things for dinner from the tiny store in town, and then headed for a campground a little further on. We were across the river from one possible campground when we heard an excited yell, “Jennnnnyyyy!!” 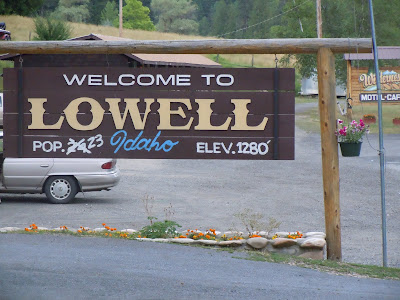 I guess someone moved away?
The yell was from the restaurant attached to the campground across the river and it was voiced by our new friend Linda. Bob and Linda were having dinner, and we eagerly crossed the bridge to that campground. We asked about the cabins there, but they were designed for families and too expensive for us. We took a campsite, and said hello to our friends before setting up camp and cooking dinner.

Dinner was only so-so. We cooked beans and rice, with garlic, zucchini and spices, but it just didn't taste quite right. Oh well, some meals are like that. We took nice warm showers, and Brett talked to Bob and Linda before turning in. We seem to have so many similar goals and experiences! They also have a blog, with a cute name: OurLifeBehindBars.blogspot.com. 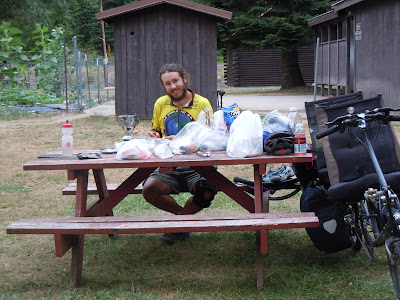 Cooking dinner.
It's fun to know that we're not alone on this long journey, that there are others out here doing similar trips and having similar complaints and similar amazing joys. Who knows what's around the bend for tomorrow?
Posted by Jenny at Monday, August 09, 2010