Originally, we intended to get an early start and have the mountain pass done early in the day to see if we could make a bunch more miles after coming down the other side into Butte. We did get a decently early start, leaving the campground by 8:20, but we hadn't had a real breakfast yet. We struggled through a very slow first hour plus to the next town, Whitehall. 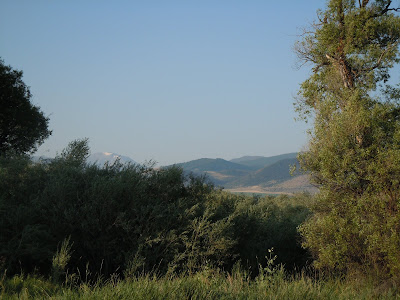 A view from our campsite, looking westwards.
In Whitehall, we found portapotties in a parking lot along Main St, where they also had picnic tables set up. We used the “facilities” and then sat down to snack and cook some breakfast. We also found a free Internet signal, so we got to read a few nice comments on the blog and some email from home. While Jenny did most of the cooking, Brett worked filling in the missing stats from days not posted yet. Now we actually know how many miles we are currently at for the trip. Breakfast was seasoned tofu, broccoli, cheese, and spice over rice. The tofu was a welcome change from things we often have. 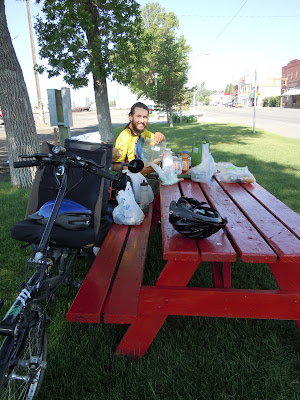 Snacking before breakfast is ready.
Across the street from our picnic spot was a little shop that opened up while we were cooking. After our meal, we rolled the bike across the street to ask the friendly shopkeeper for suggestions on which mountain pass to take. We weren't really worried about either since the first one had been such a cinch, but figured it never hurts to get local advice. She said that all the bikers take Route 2 over Pipestone Pass, and that it wasn't as bad as … Pass on Route 90. We stopped for water at another shop, and got the same advice and were told in no uncertain terms that Pipestone Pass was lower than … Pass, despite what we read on our map. 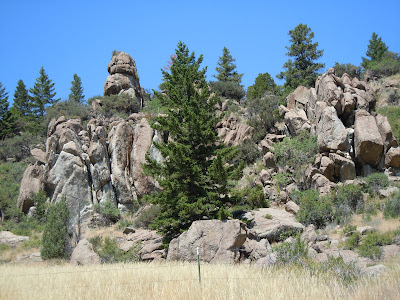 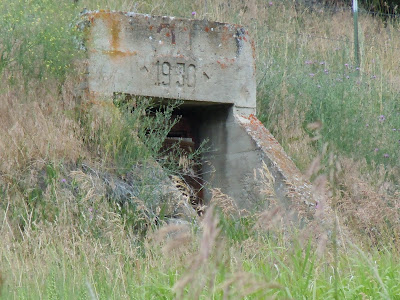 This looked cool, but we didn't investigate it. 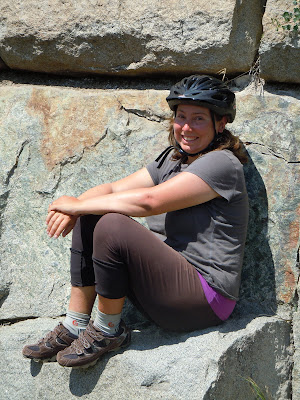 There was at least *some* fun in the sun.
For whatever reasons, every bit of the way up was kind of like torture. We couldn't get a groove, we couldn't seem to get any momentum, and it was slow going the whole way. Even stretches of the approach that looked like downhills were painfully slow. Also, it was hot, hot, hot. The sun beat down mercilessly. We found one shady spot where the stone had been carved out to let the roadway through, and we rested there for a while, but it didn't seem to help our spirits or our energy level. Onward and upward we crept. 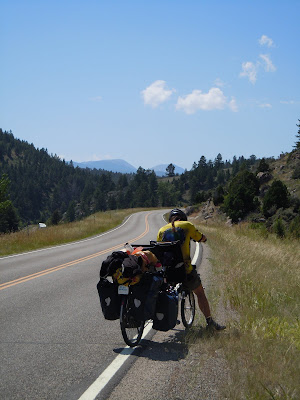 Taking a break isn't very restful when it's hot and there is no shade to be found. 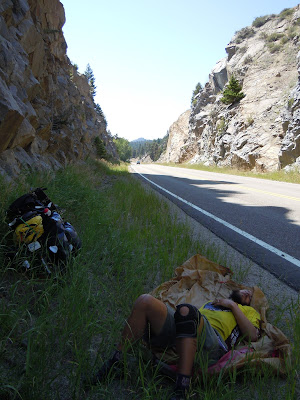 We stayed a while here in the shade. No snakes here, but swallows were flying around above our heads. 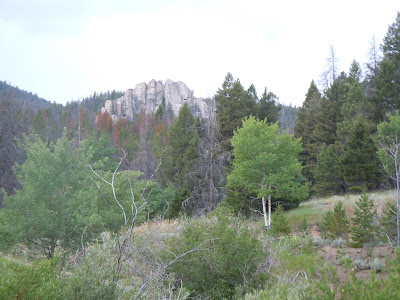 There were certainly some cool-looking rocks on this climb!
After a while, clouds did cover the sun, but then they started to look ominous. Rather than helpful shade clouds, these looked like a thunderstorm. Great, just what we need: a thunderstorm at the top of a mountain. Just as we approached the top of the pass, that's what we got. We put on our rain jackets, climbed the last little bit, and worried about going downhill on wet roads. But, that's what the drum brake is for, so after hesitating only a little, we started to go down since there was no reason to hang around at the top in the rain. 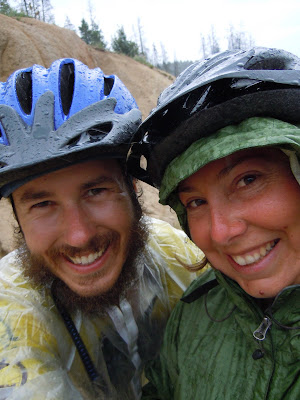 We were really happy to make it to the top, even if it was raining! 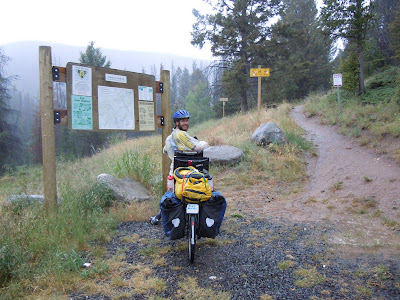 One more picture at the info sign before we go down. When they tell auto traffic to slow to 15 mph, you know it's for real.
It wasn't so bad, even with tons of switchbacks. We took a break or two, and it was COLD, but safety wasn't a big concern after we realized the drum break would hold our speed in check nicely. Brett's left thumb did get mighty cold and almost cramped working it, but soon both the rain and the grade lessened. 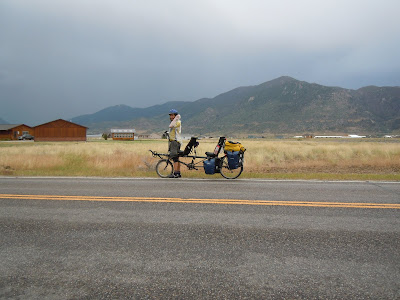 Brett covers his ears to try to keep them warm in the raw, cold wind.
The worst part was that we were now chilled to the bone, despite our best efforts to protect ourselves from the rain. Brett was really freezing, especially since his hands have to be more available to drive. We just wanted to find a public bathroom to change into dry clothes in, but it was miles and miles before we found anything like a business with restrooms. We finally saw a hotel, and although it looked pricier than we'd like, we asked their rates and then directions to a cheaper motel. We got back out to the bike, and Brett realized he really didn't want to ride any more and that he wanted a hot shower NOW. So we went back in, the clerk gave us the lowest rate she could and a room on the first floor so we could roll our bike in easily, and we headed for the shower.

The room we got had a HUGE bathtub, which we filled and then soaked in for a long time. There was also a very large, warm bed to rest on once we got out. Brett cooked up a scrumptious dinner which we both sleepily ate before turning in.
Posted by Jenny at Thursday, August 05, 2010