Having gone to bed earlier than usual, we woke up around 2 and 5, then got ourselves up at 7. We slept so long, though! We were gone from the campsite by 8:09, even after a few really fun pictures. We were amazed that two days in a row we started earlier than the previous day. Originally, we had planned to take some nice pictures with the bike by the ocean this morning, but since it was so chilly, we wanted to ride to warm up instead. 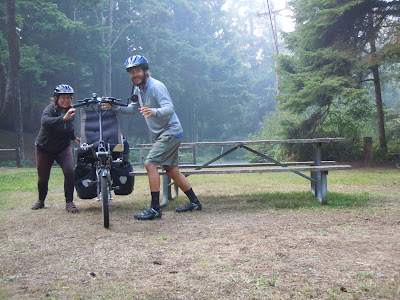 We were so excited to get going, we took a silly photo
of us "racing" to jump on the bike.
The terrain was rolling hills, and they did warm us up. The misty morning was pretty neat to ride through. We found a breakfast place for the first meal of the day and to charge our electronics. Jenny had a great omelet, but Brett wasn't particularly satisfied with his French toast with peaches on top. That's okay, because he got to eat a lot of Jenny's omelet. 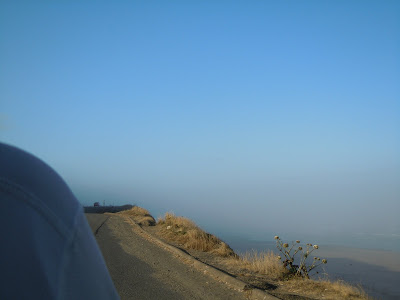 The misty morning.
Although we were somewhat eager to ride, we wanted to post a bunch on the blog, so we took time out almost immediately after breakfast when we found an ice cream parlor/coffee shop. We bought a small treat so we would be okay to use the place for Internet and electricity, and then we posted three whole days, plus uploaded more pictures for future entries. 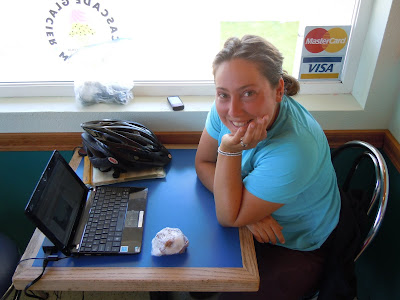 Jenny waits for photos to upload.
At last, we left Newport and continued in our new direction: south! After heading west for so long, it's a little strange to be going south now. We saw pretty ocean scenes here and there, as well as pretty wildflowers on the roadsides. Plus, we could hear fog horns along the coast! 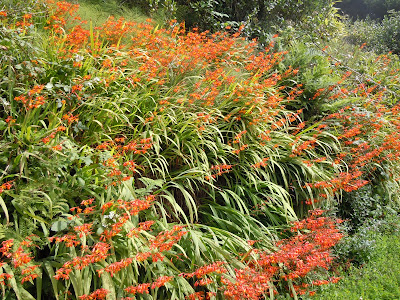 We thought this flower looked like cross between a day lily and an iris. Anyone know what it is? 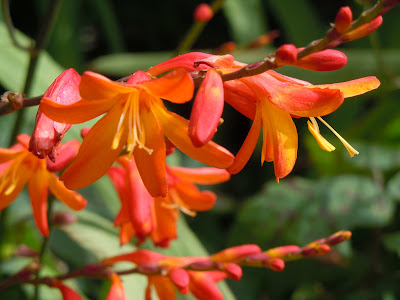 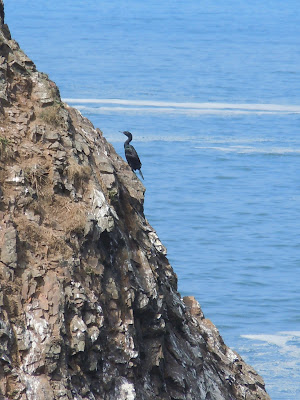 Bird on a rock.

We found a picnic area on a cliff by the ocean for a nice rest stop. While we were stopped, we called home, wrote more on the blog, and enjoyed the sunshine that was now abundant. This afternoon, we took lots of little breaks, too, because there were so many picturesque moments, looking out at the ocean. Consequently, we never quite found a riding groove, but we're still really excited that we are riding along the OCEAN after so long across the continent. 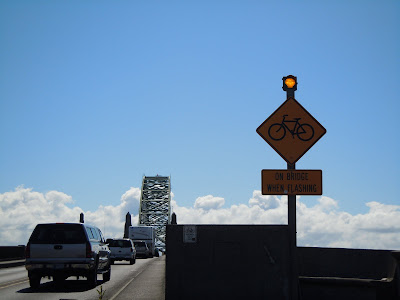 We crossed a bunch of bridges today. Many of them have a button to push for bikers who wanted to ride across. When pushed, the sign flashes, letting cars know that there is a biker on the bridge! We think it's brilliant. 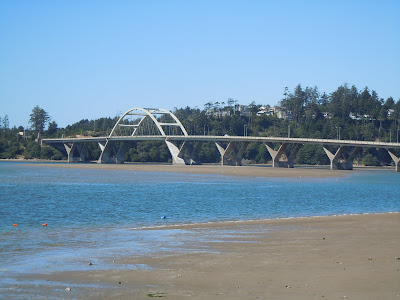 Another lovely bridge we crossed.

One neat spot we saw was Cooks Chasm, where when the tide is high you can see the water shoot up through a “spout hole.” We didn't get to see that, because the tide was out, but we did get a better view of the impressive chasm, and we marveled at the power of water to erode rock over time. 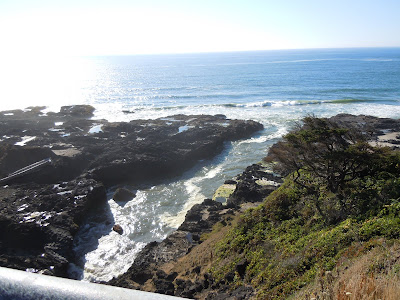 This is Cooks Chasm. We wish we could have seen the spout, but it was just the wrong time of day. Pretty neat anyway though.
Looking for a spot to buy groceries for a few meals is still a challenge, but at least we have a map that tells us when the stores are coming. This afternoon we were looking for a store that would have some good food. We found one that provided nice free Wifi, but didn't have anything we wanted to buy. We posted to the blog again, and enjoyed the comments people had left.

Further on, in Yachats, we found a store to buy food in. We stocked up with zucchini, salami, carrots, broccoli, canned chicken, swiss cheese, yogurt, some Odwalla juice and CheezIts. Our food bag was empty enough to accommodate most of that, and we were excited to have good foods with us again. Also in Yachats, we saw the bike of a touring cyclist parked, so we knew that the fellow we have seen a couple times is still right around our pace. Later, at the campground, we'd find out that he is from Germany and touring the coast, much like us!

Not far past Yachats, we stopped to play on the beach and look for agates! Strawberry Beach is a nice beach because it has sand for walking on one side and rocks and stones on the other side for those who prefer that. We climbed over some rocks to get down to the rockier side because we were excited to look for agates (translucent rocks). We found some nice ones, and took lots of pictures. Feeling satisfied with our beach experience, we dragged ourselves back to the bike. 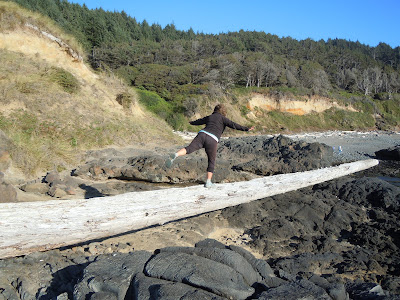 Jenny shows off her balancing skills! 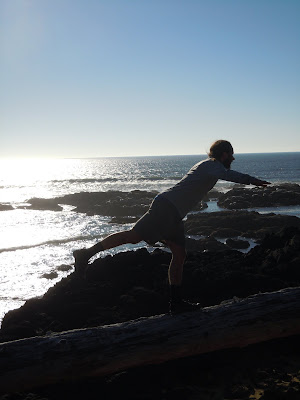 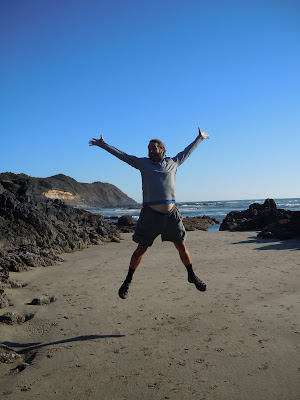 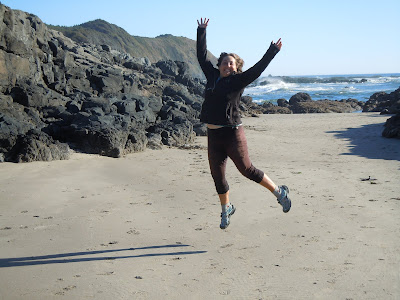 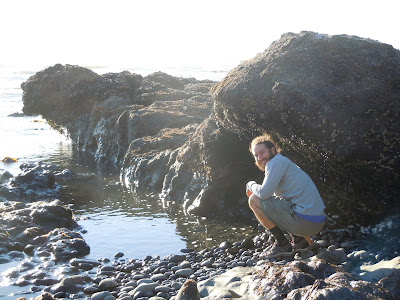 Some calmer time spent poking around the tide pools and rocks.
It was only another six or seven miles to our campground for the night. We stayed at another State Park and that seems to be par for the course here on the coast. This is a welcome change from overpriced RV Park after overpriced RV Park. The state parks in Oregon only charge hikers and bikers $5/person! For the second night in a row, we could hear the sound of the surf from our tent! What a great sound to hear after all these miles. There was one moment of panic while cooking dinner when water spilled on the stove and put it out (but the stove was re-lit and dinner was delicious!), the showers weren't nearly warm enough so we were a bit chilly, but other than that we were happy and satisfied with another fun day of biking! 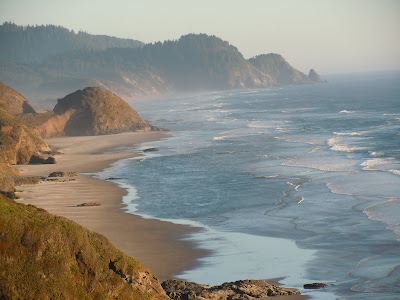 We leave you with a gorgeous view from our afternoon.
Posted by Jenny at Sunday, August 22, 2010